Back Where It All Began

The Brisbane Roar travelled to Etihad Stadium for a big Saturday night clash against Harry Kewell and the Melbourne Victory in front of 24,000 fans.  This away game would be the largest crowd that the Roar have played in front of this season.  Melbourne were the last team to beat Brisbane back in September of 2010.  And since then they also had a highly controversial 3-3 draw at Etihad last year where Brisbane equalized in injury time after Michael Theoklitos caught the ball outside the penalty area and booted it downfield to Matt McKay who scored in the dying seconds of the game.  With that kind of history, you’d expect this game to be a cracker.  The opening half did not disappoint.

Brisbane Roar were awarded a penalty in the first minute of the game and Victory keeper Ante Covic was sent off for bringing down Besart Berisha when he was clean through.  Henrique converted his third penalty in two weeks to give the Roar the lead.  Then…uh, Archie Thompson happened.  The Melbourne Victory striker suddenly found a purple patch of form and absolutely destroyed the Roar defence.  I’d seen a few commentators remark that Roar defender Matt Jurman was possible a weak link in the back four and although I didn’t really see it then, it was certainly noticable in this game.  Twice he was left for dead by Archie Thompson and both times the A-League’s most prolific striker made the Roar pay, giving the Victory an unlikely 2-1 lead with a man down.

The lead didn’t last long however.  Thomas Broich stepped up and cooly slotted home a free kick by tucking it under the feet of the jumping Victory wall.  With the scores locked at 2-2 with 30 minutes gone, the game saw further drama when referee Ben Williams gave a straight red to Victory defender Matt Foschini, reducing them to 9 players.  It was a dramatic first half to say the least.

In the second half, the Victory parked the bus and put all nine men behind the ball and spent most of the game with none of their players playing any deeper than the edge of their penalty area.  The Roar fired shot after shot but try as they might, they couldn’t break the resolute Victory defence.  When the full time whistle blew, they celebrated a moral victory.  For the Roar, they take home the consolation prize of extending their lead at the top of the table (Perth Glory lost to Newcastle Jets) and the unbeaten run is now up to 33 games. 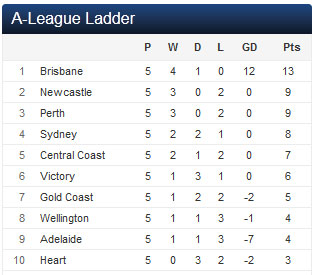 Previous: Batman: Arkham City
Next: The Best Day Ever