Don't Miss
Home > Film > We Need To Talk About Kevin

We Need To Talk About Kevin 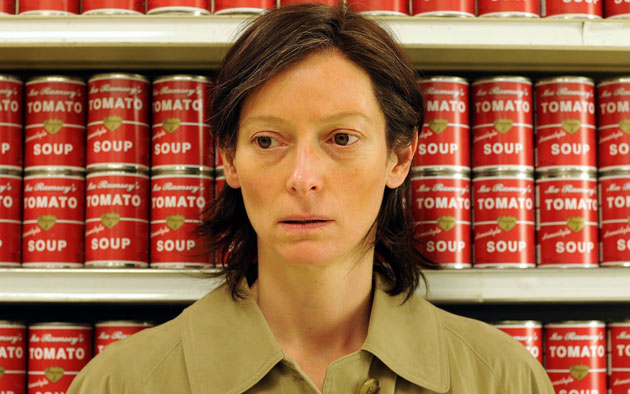 During the mid to late Nineties I remember there was a speight of high school shootings in America.  I don’t remember how many there were in total but it felt like you read about them once every couple of months.  In the immediate aftermath, there was a bunch of talking heads in the media that blamed some easy targets:  violent video games, violent movies and Marilyn Manson.  A more measured response at the time raised questions about the parenting of these children.

More recently, I also recall reading about a couple in Oklahoma a couple of years ago who made headlines for requesting to ‘return’ a child that they adopted.  Having had the child in their care for two years, they feared for their lives when they discovered the 11 year old kept a stash of butcher knives and lighters under his bed.

All these stories popped up in my head as I watched We Need To Talk About Kevin.  The central conceit in this film is whether a child can be born inherently evil.  What if you were a perfectly good parent and yet your child turned out to be a complete monster?  And not just a monster in the sense that he won’t finish his homework.  A monster who is a complete sociopath and does terrible things like…actually, I won’t spoil what it is that Kevin does.

The reason why I won’t is because its part of the grizzly effectiveness of this film.  We Need To Talk About Kevin is one of the most uncomfortable and unsettling films I’ve seen in a long time.  Director Lynne Ramsay opts to stray from the structure of the novel its based on and muddles the chhronology of the film.  We know Kevin has obviously done something terrible based on how we see the community treating her mother Eva in the aftermath.  We just don’t know what.  And as we see Eva’s flashbacks to Kevin’s upbringing, we see that he didn’t just snap.  He’s been building to his moment by progressively subjecting his mother to some seriously intense mental abuse.

Of course, the big reveal at the end, where we find out what Kevin is done is terrible.  But its much more than that.  How would you feel as a parent if one of your kids purposefully maimed the other but you couldn’t quite prove it?  How do you deal with a child that you are supposed to nurture who blatantly plays one parent against the other and turns people against you?

Even Eva’s predicament at the start of the film, which isn’t Kevin’s fault, is a rather depressing proposition.  Before giving birth she is a successful travel writer who made a living travelling to all corners of the Earth.  She was successful, independant and invigorated.  After the unplanned pregnancy, she becomes a full time housewife in the suburbs who clearly still pines for her old life.

The complex and difficult character of Eva is impeccably portrayed by the excellent Tilda Swinton.  I know Swinton has the reputation of being a fine actor but this is my first experience seeing her in a meaty role such as this.  Primarily, I associate her with her most famous role as the Ice Queen in the Narnia film.  Aloof, stoic and unemotional.  Here she is vulnerable, exhasperated and mesmerising to watch.  She is not supposed to be the perfect mother.  The film wouldn’t work if she was.  Instead she is relatable.  She tries her best.  She gets frustrated.  She loses her cool.  But she is smart.  She regathers her thoughts.  Tries new strategies to build a relationship with Kevin.  And then gets increasingly desperate and disengaged when it fails.

We Need To Talk About Kevin is an unrelenting pile of misery for its full two hour running time.  Clearly this is a film that you need to be in the right mood for, given its challenging emotional content.  But for those who are game, there is an interesting, thought provoking film here with outstanding performances from both Swinton and Ezra Miller as Kevin.

We Need To Talk About Kevin

Summary : Disturbing and creepy. Worth a watch if you're game.

Tagged with: Ezra Miller Tilda Swinton We Need To Talk About Kevin