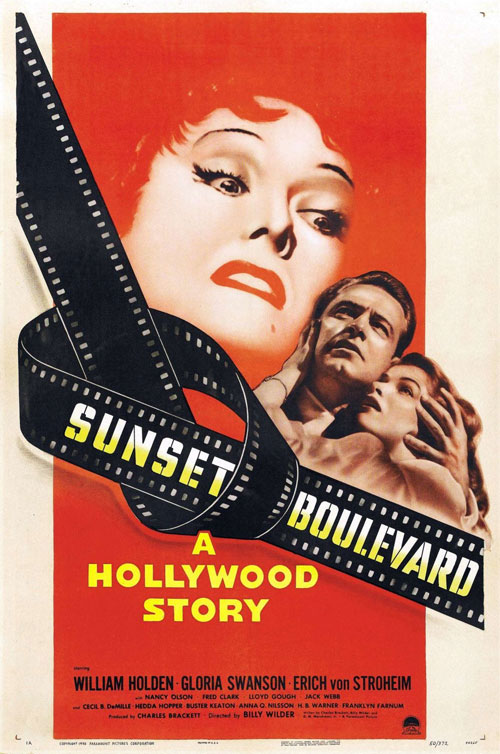 Sunset Boulevard is a Hollywood film about Hollywood itself.  Director Billy Wilder covered a wide range of topics in his illustrious career – alcohol addiction, tabloid journalism, corporations and marriage to name a few – and with Sunset Boulevard he has created one of his most entertainingly dark and morbid comedies about the pursuit of fame and the fleeting glory of Hollywood stardom.

Billy Wilder’s noir classic Double Indemnity began with a mortally wounded man narrating a confession.  Sunset Boulevard goes one better and begins with a dead man floating in a pool narrating his demise.  He is Joe Gillis, an aspiring Hollywood script writer who is low on cash and even lower on ideas.  One of the first scenes involving Gillis has him visiting Paramount Studios where he pitches a baseball picture – called Bases Loaded – to a producer who takes pity on him far enough to listen to his lousy ideas but not far enough to ever invest in them.  Even the producer’s assistant Betty Schaefer, played by Nancy Olson, finds them trite and hackneyed.

Desperate, facing bankruptcy and with the repo men on his tail to claim his car, Gillis flees and drives into what he believes to be an abandoned mansion.  Instead he meets a creepy old butler Max and the reclusive silent film star Norma Desmond.  Norma is wealthy, flamboyant and filled with disdain for the ‘talkies’, motion pictures with audio that brought an abrupt and unceremonious end to her career as a silent film star.  “You used to be big” remarks Joe when he learns who she is.  “I am big!  It was the pictures that got small” she retorts beautifully.

Gillis observes that despite her bravado, Norma is actually decrepit, unstable and desperate.  When he learns that she has a screen play that she is trying to shop around Hollywood for her big comeback, he sweet talks his way into being her script doctor.  Penniless and out of work, he agrees to a partnership with Norma against his better judgment, unaware of what he is getting himself into. 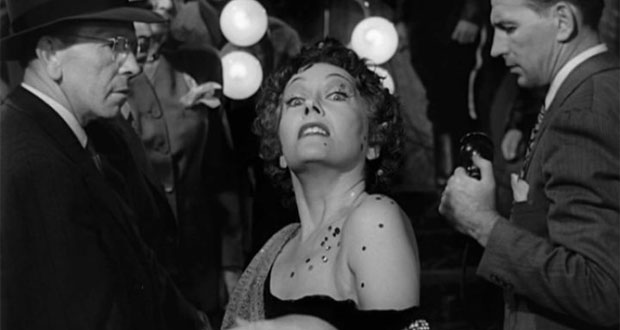 Gloria Swanson, in her most famous role, is mesmerizingly unhinged as Norma Desmond.  Her obsession with fame, wealth and the adulation of her peers is only accentuated by the actions of her faithful servant Max who wears a permanently anguished expression on his face, as if he is forever saddened by her fading star.  We sense that he understands that Norma’s time in the spotlight will never return but he dutifully complies with her every request and he even writes Norma adoring letters, masquerading as fan mail, to indulge in her charade.  They make a hell of a pair.

Part of the fun Billy Wilder has with making a film about Hollywood is his namedropping and use of real studios, real directors and real actors.  When Norma Desmond has a bridge night with her washed up old silent actor friends, that’s the real silent movie stars Buster Keaton and H.B Warner that she’s sitting at the table with.  When she wants to work in Hollywood again and calls a big shot director, she calls Cecille B.Demille.  These little Easter Eggs and kernels of truth that are sprinkled into the storyline only add to the sense of fun Wilder has poking and prodding at his subject matter.

At the heart of the film is the wonderfully weird and uncomfortable union between Joe and Norma.  Joe knows full well he is taking advantage of Norma, but he becomes increasingly conflicted with his deception as she lavishes him with money, expensive clothes and embarrassingly extravagant parties in an attempt to win his affections.  Norma’s carefully constructed fantasy world in which she believes she is imminently returning to the big time is put to the test when she visits the Paramount Studio set and no one has the stones to tell her that her services are not required.  We learn that the only reason Paramount came knocking was to ask permission to use her rare motor vehicle in an upcoming movie.  Instead, she leaves convinced that she has been cast in the next big motion picture.  To make matters worse, Joe begins to fall for Betty, the producer’s assistant that critiqued his earlier work.  You could say that Norma is the jealous type and doesn’t respond well when she learns of their blossoming relationship.

Sunset Boulevard is best described as a tragi-comedy.  It is too silly and over the top to take seriously but the performances by Swanson and Erich von Stroheim as her butler Max are so endearingly deranged that you can’t help but get swept up in this merciless satire about the cult of celebrity.  When you see the rigorous regiment that Norma puts her face through to try and pickle and retain her youth, when you see how desperate she is to be loved both on the silver screen and by Joe, you don’t know whether to laugh or cry.  Norma Desmond may be a crazy, delusional has-been but by God she’s our crazy, delusional has-been.

Summary : A dark, unflinching comedy about an insane recluse who craves a return to her Hollywood glory days. Sunset Boulevard is an entertaining satire and features a classic performance from Gloria Swanson. 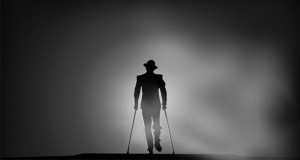