Two thousand years ago, a genie is imprisoned inside a lamp by an evil wizard in Arabia.  He remains there, locked in his tiny ornamental prison until the Nineties when a foppish British art curator Bernard Bottle (Alan Cumming) comes to have the lamp in his possesion.  Although it is Christmas, Bernard is having a tough time of it.  He has been fired from his job by the evil art gallery owner Pinkworth (Rowan Atkinson) and his girlfriend has just left him for his best friend.  At home, jobless and lonely before Christmas, Bernard absent-mindedly rubs the lamp to release a hyperactive LENNY HENRY in tights and a turban.  Bernard comes to form a close friendship with his new Genie friend.  He gets an endless supply of wishes and over the course of the rest of the film, he gets his revenge on his evil boss and unfaithful girlfriend.  Along the way, he introduces Genie to the wonders of Nineties living – junk food, Arnold Schwarznegger films and MC Hammer pants.

I absolutely adore Bernard and the Genie.  I was introduced to it by Mike and Matt a couple of years after it first aired.  It is exquisitely Nineties in its cheerful optimism, terrible clothing and shockingly unabashed worship of consumerism.  How can you not appreciate the cheesy schmatlz of a film with the tagline You’ll believe nylon carpets can fly!

This entertaining all ages film is so sweet natured and precious, as embodied by Cumming in his portrayal of Bernard.  How else to describe a film in which a man is fired under outrageous circumstances and loses his girlfriend to his best friend but comes out feeling on top at the end of the film when he cheers himself up by buying a big bucket of KFC, some Pizza Hut and McDonalds burgers (that are served in glorious styrofoam boxes).  He doesn’t get back his job, his best friend or his girlfriend but by God, the man gets his own box of fried chicken!  When I first watched this at the age of ten, I felt that was a pretty reasonable trade off.

I think Hollywood used this time honoured storyline to find a more broader audience with Bedazzled which cast Brendan Fraser in the Bernard role and an absolutely smoking hot Elizabeth Hurley as Genie.  Naturally, that movie grossed a million billion dollars whereas this film is probably remembered fondly by about five people.

Still, when it comes to this time of year, this is one of my favourite Christmas films to watch.  I can’t believe its twenty years old now.  It’s a feel good movie thats deeply silly and a joy to behold. 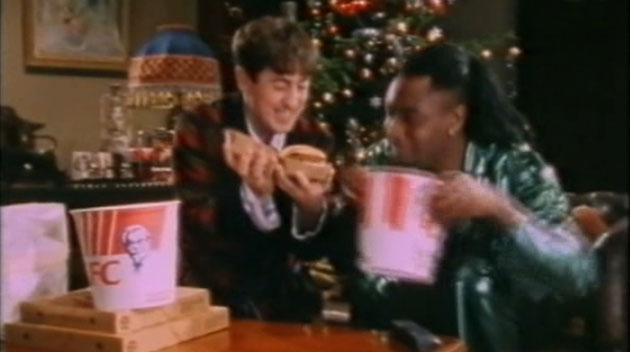 Summary : Through my rose tinted glasses, this is one of the greatest Christmas films of all time. If you didn't watch this as a kid, its probably two stars.

Previous: Super Mario 3D Land
Next: We Need To Talk About Kevin