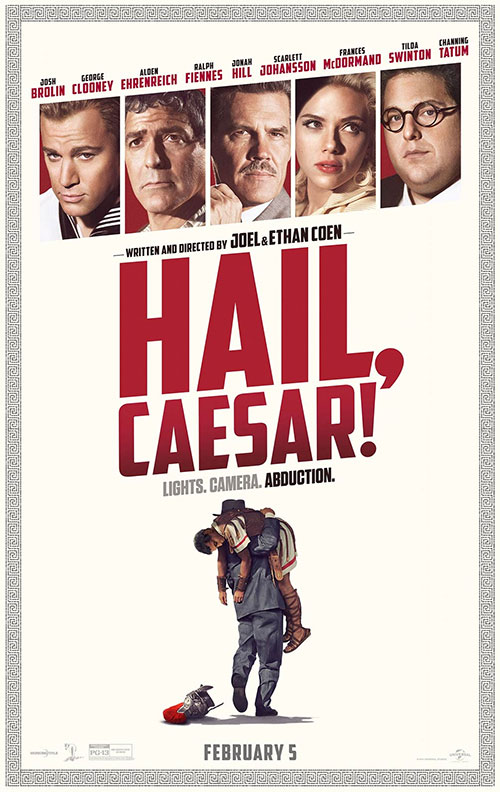 The Hollywood Golden Age is in full swing and studio fixer Eddie Mannix is in a jam.  His lead actor Baird Whitlock has disappeared off the set of their latest big budget motion picture.  A ransom note has been sent by people claiming to be from The Future.  Identical twin gossip rag journalists are badgering Eddie on Baird’s whereabouts and one of the top studio directors Laurence Laurentz is unhappy with the casting of a cowhand as the lead in his new period drama.  Welcome to the world of Hail, Caesar!

Hail, Caesar! is a Coen Brothers comedy, the first we’ve had in eight years.  It is a chaotic, mish mash of a production that is packed with big name Hollywood stars and at times, the scenes barely feel connected.  But despite its ramshackle nature, Hail, Caesar! is consistently funny and is a crowd pleasing love letter to the golden age of cinema.  I appreciate that not everyone will care about verbal nods to Wallace Beery and Danny Kaye but I think even people who have merely a passing interest in this age of cinema will appreciate the spectacle of Scarlett Johanssen and her synchronized swimming troupe or Channing Tatum channelling Fred Astaire with a big time costumed song and dance number.  It is a film that is in love with the idea of Hollywood in the Fifties.  Classically handsome leading men.  Gorgeous dames flashing their pearly whites.  Epic sound stage productions with a thousand extras.

Of course none of it would be worth a damn if the script doesn’t come together.  To that end, I think Hail, Caesar! is one of the Coen’s funniest works in a long time and comfortably sits shoulder to shoulder with other classic comedies they’ve produced such as The Big Lebowski and Raising Arizona.

There are dozens of great bite sized performances from some Coen Brothers regulars to enjoy here.  George Clooney basically reprises his cheesy persona from O Brother Where Are Thou? and is brilliant as movie star Baird Whitlock.  Ralph Fiennes was a comedic revelation two years ago in Grand Budapest Hotel and here he damn near steals the show in a ridiculous scene with Aiden Ehrenreich where Ehrenreich’s character Hobie can’t quite get his mouth around the line ‘would that it were so simple’.  It’s a hilarious homage to Jean Hagen’s most famous scene from Singing’ In The Rain.

One of my favourite moments in the film is a a scene with four religion leaders debating the theological merits of the film.  “He’s an angry God!”  “He was an angry God…” “What, he got over it?”

Hail, Caesar! revels in absurdity.  It enjoys poking fun at far-ranging topics including celebrities, religion, communism and journalism.  But it does so in a very affectionate manner.  Hail, Caesar! feels like the Coen Brothers letting down their hair and having a bit of fun. 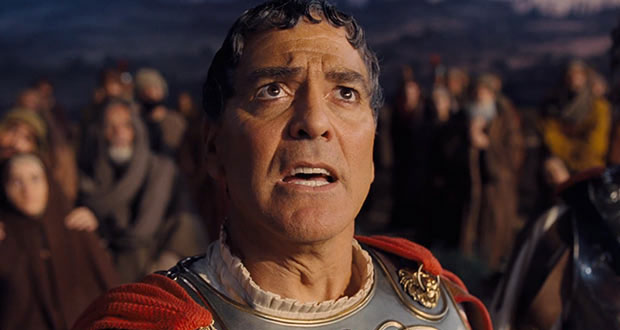 There are many familiar names in the production who deliver fine performances but perhaps one of the most revelatory turns comes from the little known Aiden Ehrenreich.  Ehrenreich plays Hobie, a simple minded performer whose bread and butter is performing stunts in Westerns.  His career is turned on its head when he is rushed to the studio to perform as the lead in an arty period drama.  He is also asked to stage an off-screen romance with an actress in the interests of raising their profiles with gossip columnists.  Ehrenreich’s performance as the dim witted but endearingly earnest Hobie is one the best things about Hail, Caesar!

Holding the whole production together is Josh Brolin as Eddie Mannix.  Mannix was a ‘studio fixer’, apparently a real life occupation whose responsibilities involve keeping wayward actors in check and ensuring paparazzi and coppers don’t interfere with the  production schedule.

Brolin’s Mannix is a calming, unflappable presence.  He constantly deals with unhappy actors, directors, producers and financers and he plays a delicate balance act, ensuring everyone gets on with the job and that the show goes on.  He is a Catholic with a lot of guilt on his shoulders.  He knows he doesn’t spend enough time at home.  A head hunter from Lockheed is patiently courting his services, throwing an ever increasing salary at him as well as the offer of ‘getting serious’ and doing ‘meaningful work’.

But for Mannix, a love of Hollywood, and all its weird and wonderful excesses, keep him going.  Most films have a character who represents the eyes and ears of the audience.  In Hail, Caesar!, I think Mannix represents the Coens.  This is their nineteenth feature film in a thirty two year career.  Who knows what keeps them going or how long they intend to make films for but clearly, a love of cinema, and specifically a love of Hollywood, is a big part of the appeal.

Summary : Hail, Caesar is a chance for the Coen Brothers to goof around and revel in the silliness and excess of Golden Age Hollywood movie making.