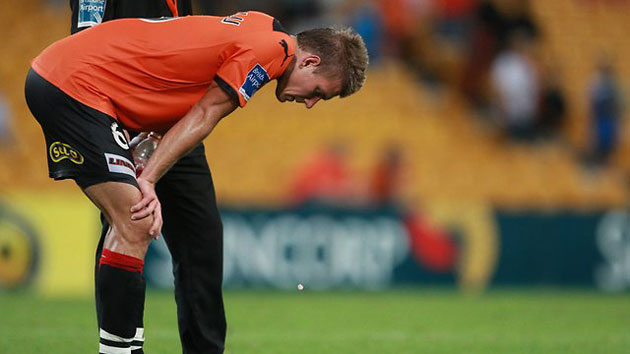 In the end, for the fourth straight week, Brisbane Roar conceded two goals and their only reply was a fluke consolation goal from super sub Kofi Danning whose intended cross ricocheted off a defender and into the back of the net.  That’s now four straight losses in a row and four weeks of conceding two goals in the game.

So what’s gone wrong for the once mighty Brisbane Roar?  Four weeks offers plenty of time to analyse the performance of the team and make a few assessments.

Time to adjust the tactics

This is a group of players who are not used to losing and with each loss piling on top of the one before, they haven’t had the character to play their normal game plan with the same fluidity that they once had.  Interestingly enough, the team still maintained the lion’s share of possession in all four losses but the speed at which they attack has been lethargic.  The team instead has been content to slooowly play the ball down the flanks only to find opposition sides have packed the penalty area and stung them on the counter attack.  I mentioned earlier in the season during the 2-1 win over Newcastle that it would be interesting to see other team’s finding a tactical counter to the Roar.  Well it seems they have.  And its now up to Ange to respond once more.  The current Roar side seem very flat in their attacking options, repeating the same options over and over.  The combinations of Issey and Franjic hasn’t been as successful as we would like and on the other flank, I don’t believe Rocky Visconte and Shane Stefanutto have the pace to hit teams down the flank.  Of course, Rocky Visconte has only been playing in that position because…

The team will naturally improve in 2012 with the return of the best player in the A-League Thomas Broich.  Not just that but we are currently missing captain Matt Smith, James Meyer and Henrique.  All four players have been an integral part of the Roar engine room and Broich, Henrique and Meyer all were frequent contributors of goals in the back of the net.  Besart Berisha, who scored nine goals in five games has been missing the service from Henrique and Broich in particular.

When we assess the quality of the pre-season signings, its been mostly positive.  Besart Berisha, Mohammed Adnan and Kofi Danning have all been fantastic and worthy inclusions into the side.  Issey Nakajima Farran, despite having three goals to his name, has been a bit hot and cold so the jury is still out on him.  The only player to stand out negatively for me is former Sydney FC defender Matt Jurman.  The guy is a massive physical prescense in the middle of defence but my God he moves and turns like a tank.  It’s been on his watch that Melbourne Heart, Wellington Phoenix and now Central Coast have raced past him and put themselves into a prime goal scoring position.  He is slow with his service when he is in possession and his passing accuracy leaves a lot to be desired.  We desperately need Matt Smith back because I believe teams make a concerted effort to run through Jurman and so far it is working.  A healthy Brisbane Roar back four in my mind would be – Stefanutto, Smith, Adnan and Franjic.  Adnan has shown he has the fitness now to go the full ninety minutes.  Ange has to make this happen when Smith returns from injury.  If he moves Adnan back to the bench then he is nuts.

So where does that leave my beloved Brisbane Roar?  Currently third after the inform Melbourne Heart won in stylish fashion at the local derby against the Victory.  None of the missing players are due to return from injury until the New Year.  In the meantime, a game against bottom of the table local rivals Gold Coast beckons on Boxing Day and on New Year’s Eve, Harry Kewell and the Melbourne Victory come to town.  Fortunately both teams are rubbish so if there was ever a good opportunity to turn around some poor form this is it.  There’s still a long way to go in the season and no reason to panic.  In Ange, we trust. 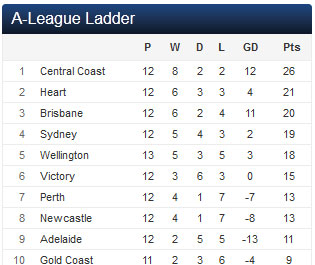 Previous: We Need To Talk About Kevin
Next: Christmas Eve Youtube: The Year In Review