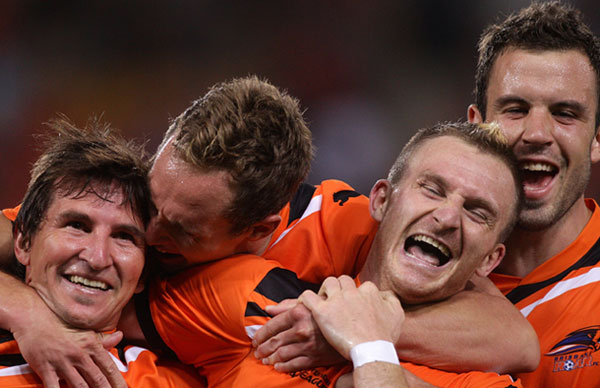 So happy we didn't lose again

The Round 14 clash between Brisbane Roar and Melbourne Victory took place at Suncorp Stadium on New Year’s Eve.  I had ribs before the game at the Caxton Hotel to celebrate the end of the New Year.  They were delicious. 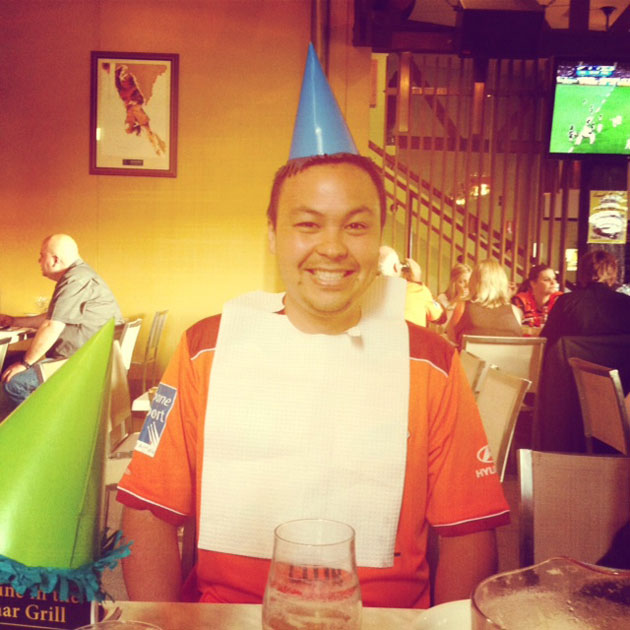 “Harry Kewell will score his first A-League goal (in open play) this game” I predicted to my wife and friends about ten minutes before kick off.  I make a bunch of useless predictions before every game.  I incorrectly predicted the end of the undefeated streak about ten times.  For once though, my prediction came true.  Within two minutes of the game infact.  Kewell latched onto a mistake by skipper Matt Smith and fired home a low drive from outside the penalty area.  Five losses in a row was beginning to look like six.

After five miserable weeks, Ange Postecoglou shook things up tactically in this game.  We finally ditched our 4-3-3 formation.  Our system used to work because our two defensive backs Ivan Franjic and Shane Stefanutto would press up in attack and our two central defenders would cover the counter attack.  Unfortunately, my favourite whipping boy Matt Jurman is an absolute tank in the centre of defence and its too easy for teams to hit us on the counter when they exploit his slow turning speed.  So Ange now laid down a flat back three with Jurman, Smith and Adnan whilst still keeping Franjic and Stefanutto running the overlap on the wings.  This new formation worked a treat.  Adnan can cover for Jurman’s mistakes and it still allows for Franjic and Stefanutto to be adventurous on the wings.  Having a solid back three also means Erik Paartalu can be more incisive in attack and alongside young midfielder Luke Bratten (who started over the out-of-form Murdocca and Nakajima-Farran), we found a new formation that actually created some shots on goal.  22 shots on goal in fact.

The statistical domination in this game finally paid off just before half time when Mitch Nicholls latched onto a cross from Erik Paartalu and his diving header evened the ledger at 1-1 on halftime.  In the second half, the Roar came out firing.  An incisive throughball from Besart Berisha found Rocky Visconte who gave the Roar a 2-1 lead.  It had been 7 and a 1/2 hours of football since we were last in the lead.  It was sweet relief.  A few minutes later, another Berisha assist lead to Ivan Franjic slotting home goal #3.  Brisbane were back.

I always said it would be ‘interesting’ to see what happened when the rest of the league caught up and we had to adjust our approach.  Admittedly I didn’t think it would lead to five straight losses but I’m glad we showed the character and the intelligence to adapt our game once more.  Now the chase is back on to catch the in-form Melbourne Heart and Central Coast Mariners.  The next A-League round on January 4th is another novelty round.  All the games in the round are being played on the same day in 11 straight hours of football.

Also, I think I’m done with streaks.  If possible, I’d like for us to just win and lose like a normal team. 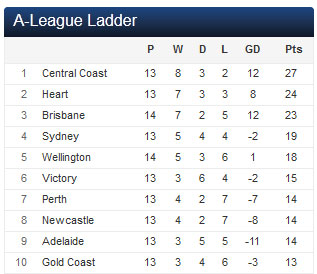 This season is only halfway through but has already seen a whole host of weird booking decisions.  In 14 rounds of football we’ve had a Wellington Phoenix player sent off for taking 3 seconds to throw in the ball, Michael Theoklitos yellow carded for ‘marking the pitch’ with his boot, a Melbourne Heart player was yellow carded for celebrating Christmas and last round Sergio Van Dijk was yellow carded in Adelaide’s game for using the toilet.  What’s next?