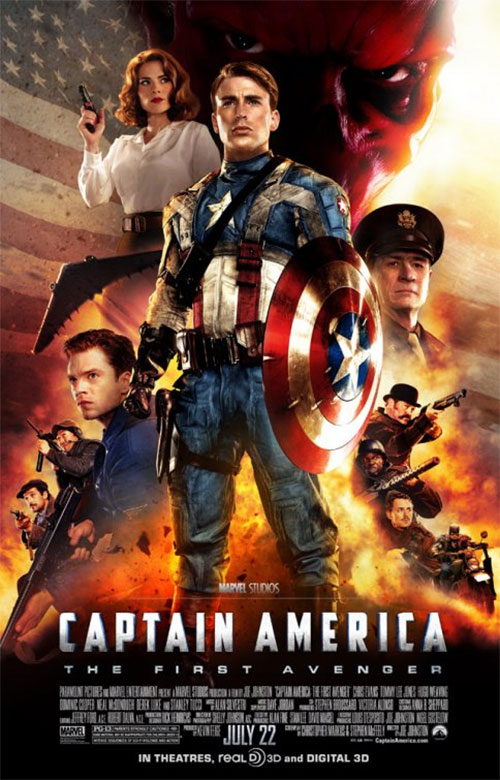 Steve Rogers is a scrawny, pencil-necked man who desperately wants to serve his country in World War II but is turned away for his wretched physique and laundry list of health issues.  Not easily discouraged, Rogers travels around several cities, repeatedly attempting to enlist under different pseudonyms.  His passion for serving his country catches the attention of Doctor Abraham Erskine, a military scientist who recruits Rogers as a candidate for his super soldier serum.  A newly buff Rogers briefly spends some time moonlighting as a performer in a USO Show before finding his calling as a genuine soldier.  So begins the origin story of Captain America.

What is your breaking point for the number of super hero films you can watch in a single year before you completely switch off?  With Captain America, I discovered my limit was four.

Captain America opened in theatres in July to a generally positive reception.  It currently has a 79% freshness rating on Rotten Tomatoes and did pretty well at the box office.  All sure signs of a decent night out at the movies but unfortunately super hero fatigue got the best of me with this one.

You should probably know that Captain America is unequivocally a great action blockbuster for ten year old boys but has limited appeal for anyone older.  Case in point – this is a film that felt compelled to introduce a villain named Red Skull that is ‘more evil than the nazis’, has only one female character who is entirely defined by her romantic interest in the hero and by the end of story, things devolve to the point where people are running around shooting lasers that go ‘pew pew’.

I understand there is a market for this stuff.  The people who I watched the film with will watch The Green Lantern and The Avengers and anything else Marvel and DC pumps out in the years to come.  I just wish there was more effort put into differentiating these films so they didn’t feel like they were churned out in assembly lines.

Take for instance the setting for Captain America which should be what contributes towards making this film unique in its genre.  America and Germany during the height of the Second World War should be a fine setting for some really interesting action sequences using iconic guns and vehicles of its era.  Unfortunately, Captain America completely squanders the opportunity by introducing ‘secret military technology’ which is basically the same souped up fighter planes and rocket powered cars that you get in every other super hero movie set in modern times.  Bizarrely, the end sequence of the film appears to pay homage to Star Wars: Return of the Jedi by staging a laser gun shootout in a futuristic military bunker in the woods.  At that point, the film appears to have completely forgotten that it is set in the Forties.

My other major beef with Captain America is that is suffers from the same lack of cohesion in its editing and direction that is so emblematic of modern day action films.  Several times the creators opt to use montages of Captain America’s exploits instead of showing them in full.  Have directors forgotten how to construct an action scene?  Why do we only get snippets and crumbs of what took place?  The most frustrating tease is a brief glimpse of the Cap’n taking down a gigantic super sized tank in a city reduced to rubble.  What happened there?!  It looked like it must have been an incredible battle.  Why couldn’t we see that sequence in full?

Anyway, I’ve had my two cents.  These films are made competently enough that there will always be a pretty sizable market for them.  As for me, unless its directed by Christopher Nolan or is a pastiche of the genre like Kickass, I think I’ve just about exhausted my interest in this genre for a while.

Previous: The Holiday Blog
Next: Rise Of The Planet Of The Apes