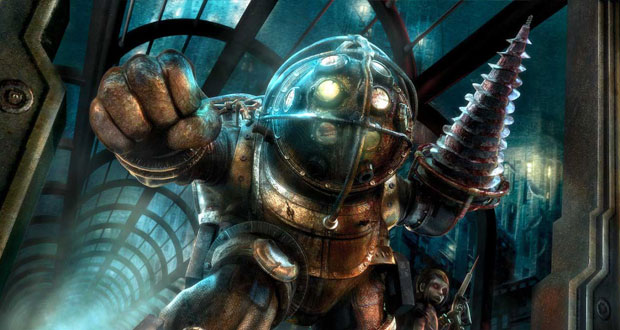 The video game industry needs more games like Bioshock.  It is only one game and yet it accomplishes so much.  2K Boston have created a game so full of atmosphere, that has also defied industry expectations of how well a title targeted at adults can perform in terms of sales and stands up to critical assessment against the Roger Eberts of the world who claim video games and their narratives are too simplistic to ever be considered art.

Bioshock tells the story of Andrew Ryan, a self made industrialist who in 1946, decides he can find no place on Earth to satisfy the lifestyle and society he wishes to surround himself in.  Ryan rejects notions of capitalism, communism and theism and builds his own underwater city where “the artist would not fear the censor and the scientist would not be constrained by petty morality”.  Despite this rather drastic act, Ryan also appears to be a man who appreciates irony.  He names his city Rapture and despite loathing “the man in Washington”, keeps the dollar as the form of currency.

Rapture initially thrives and grows into what looks like an underwater Gotham city with large gothic towers that are interconnected with perspex corridors.  The city teems with atmosphere even at the depths of the ocean with its huge glowing neon signposts and phonographs that play Frank Sinatra, Bobby Darin and Bing Crosby tunes.

Rapture’s downfall is triggered when a scientist, Doctor Bridgette Tenenbaum discovers a form of stem cells from seaslugs, which she names ADAM.  ADAM unlocks many fantastical genetic enhancements through the use of plasmids (fast replicating DNA strands) which the citizens of Rapture splice with their own bodies.  To help harvest and process ADAM, which quickly becomes a precious commodity in Rapture, Tenenbaum creates test tube babies named Little Sisters which have the slugs embedded within them.  They are protected by giant subhuman bodyguards named Big Daddies, the games’ most recognizable characters, whose trademark is the giant diving suits they wear.

Around this time, a mobster by the name of Frank Fontaine comes to Rapture and tries to overthrow Ryan’s empire.  This leads to a genetic arms race between those loyal to Fontaine and those to Ryan, causing many of the citizens to turn into splicers, nicknamed as such for their excessive gene modification which has turned them mad.

Only at this stage does the player, as Jack, the lone survivor of a plane crash, first discover Rapture, as it lies in ruins.  Jack is apparently driven by survival but is given conflicting advice from Tenanbaum, Ryan and the mysterious Atlas on who to trust and whether he should harvest the Little Sisters for ADAM to build up his own strength.  The choice the player makes has a direct bearing on how the plot unfolds.

While Bioshock will ultimately be remembered for its rich storyline and unique environment, the gameplay more than holds it own as well, played from a first person perspective with some light RPG elements which come in the form of choosing which abilities to develop when Jack gene splices the ADAM he harvests to unlock new abilities.  As the player discovers more abilities, they can link particular combinations of attack like building blocks.  You can, as an example, confuse an enemy by creating a duplicate of yourself to distract them, approach them from behind and set them on fire, then when they run into a pool to douse the flames, you can give them an electric shock to finish them off.  Its a terrifically versatile system.

The game puts story progression and sandbox experimentation over challenge.  There are plenty of checkpoints and the player is revived in a matter of seconds if they ever fall.  Also, when the player restarts, their health is restored, but any damage dealt to splicers or Big Daddies will be kept.  Coupled with an optional guide arrow which tells you where to go and game hints on demand, Bioshock is a game made with the intention of having most players complete the story.  Given the strength of the narrative and how enjoyable the game design is, this is no bad thing.

Ultimately, Bioshock‘s most satisying moments do come from the atmosphere and small touches in Rapture.  Discovering crates of blackmarket bibles, a dead splicer who was killed before he could finish writing the sentence “ATLAS IS-” and The Nutcracker playing over the PA during a particularly bloody battle in a theatre all make Bioshock the memorable experience that it is.

There have been plenty of great games in recent years that have both challenged and discovered new ideas regarding the playing of video games.  It has been a long time since we have seen anything this good when it comes to the context of the gameplay and how the story is told.  I leave off with a quote from video game web comic Penny Arcade:

“It is my intention to secure two copies of the game, entire – one Collectors’ edition, and one exclusively to shove up Roger Ebert’s ass. If Bioshock isn’t “art,” then art is the poorer for it.”

Platform:  Xbox 360 Developer:  2K Boston Publisher:  2K Games The video game industry needs more games like Bioshock.  It is only one game and yet it accomplishes so much.  2K Boston have created a game so full of atmosphere, that has also defied industry expectations of how well a title targeted at adults can perform …

Summary : An absorbing, frightening and fiendishly clever game that is absolutely dripping with style. Rapture is one of the most memorable environments ever created for a video game and there is a dark, twisting story to be told for those who explore its depths.

Previous: Waitress
Next: This Is England