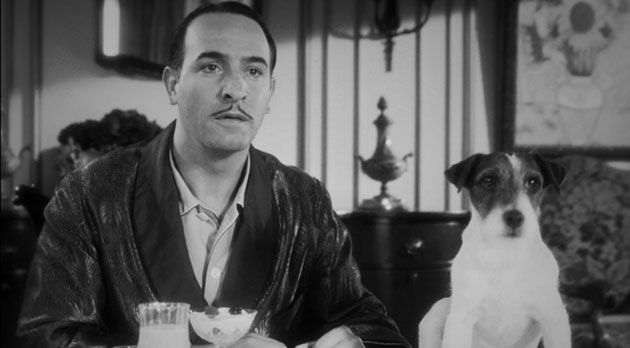 Michael Hazanavicius’ film The Artist is the hotly tipped favourite to blitz the Oscars this year.  It’s certainly had a lucrative lead up in the festival circuit and during awards season, winning about 40,000,000 Best Picture prizes in the last couple of months.

That the film can be taken on face value as the prototypical poncy art-house fare that the Academy loves and almost no one else watches suggests that The Artist is poised to get the sort of backlash that Brokeback Mountain, The Reader and Babel all received after their nominations for being too obtuse, too niche and too dry in content.

I believe that won’t be the case with The Artist.

Although the prospect of releasing a silent, black and white film in 2012 sounds like a repellant to mainstream audiences, I believe the precious few who do end up buying a ticket and watching this film will end up loving it. You don’t need to be a diehard film buff or have any awareness of the Hollywood silent screen era to appreciate what The Artist has to offer.  In fact, by the very nature of being a silent film, whats on screen should be universally appealling and easy to understand.  Everyone can enjoy a little showbiz dog that does tricks.  We are all familiar with the story of a meet-cute romance between a bigtime Hollywood star and a commoner who instantly have a chemistry together.  And we know the character of a cigar-chomping movie mogul the second we see one.  These are all concepts and tropes that need no words to understand or appreciate.

The Artist tells the story of George Valentin, a hotshot silent film star who is the toast of Hollywood.  He lives in a loveless marriage but does not seem to mind all that much.  He has the company of his loyal Jack Russell Uggie and he has the adoration of the public.

Almost overnight, he is cast aside by the industry for the emergence of films with sound.  He is dismissive of these films as a fad and is left for dead by a new generation of actors eager to show off their vocal range.

The fall of Valentin’s career co-incides with the rise of Peppy Miller, a girl who quite literal stumbles upon her chance at fame.  She and Valentin share a chemistry but their chance at love is hampered by Valentin’s marriage and his ailing career.  The film briefly flirts with a post-modern self awareness of being a silent film but it doesn’t get too cute about it.

That’s about all you need to know really.  From this setup, The Artist tells a sweet, simple love story that has romance, hubris, despair and redemption.  Like Martin Scorcese’s Hugo, I believe there will be certain scenes and characters in the film that will be evocative of 1920s cinema which audiences will feel familiar with, almost inspite of themselves.  Thematically, it strikes a similar chord to The Illusionist, Sylvain Chomet’s beautiful silent animated feature about an out of work magician coming to terms with the fading relevancy and appreciation of his craft.  The two films make a nice companion piece.

The Artist feels enchanting and absorbing thanks to the stellar performances from both Jean Dujardin and Berenice Bejo, not to mention the excellent supporting cast.  Dujardin has a fantastically expressive face that is perfect for silent film and Bejo is attractive and classically beautiful.  To see more familar faces such as John Goodman and James Cromwell is to appreciate how an actor must exaggerate and change their body language for silent film and gives the audience an appreciation for the craftsmanship that goes into performing for a silent film.

The Artist is more or less perfect in what it sets out to accomplish.  Here is a modern day silent film that is nostalgic and authentic whilst simultaneously feeling fresh and accessible.

Time is precious and there are plenty of forms of media that vie for my attention.  But few forms of entertainment, be they books, films, tv shows or games, made me want to go back to the start and enjoy the experience all over again the way The Artist made me feel.  A truly great film.

Summary : A fantastic, accessible and entertaining callback to the silent film era. If you've never seen a silent film, this is a great entry point.

Tagged with: The Artist