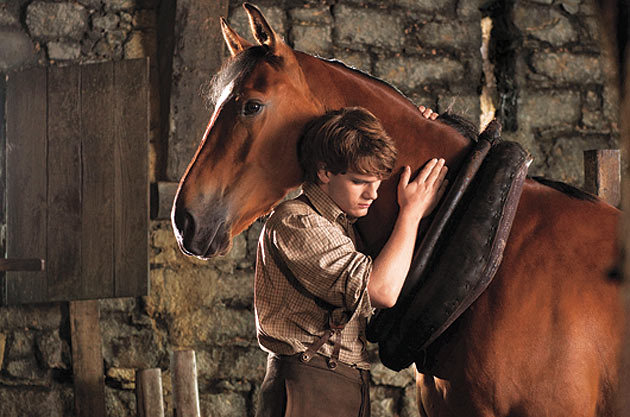 War Horse is the Forrest Gump of horse movies.

The two films both have a likeable protagonist who forms many friendships with people across all walks of life, have a talent for running and find themselves inadvertantly at the centre of several historical moments in the 20th Century.  Which is pretty strange when you consider that the lead character in War Horse is indeed a horse.  His name is Joey.

Steven Spielberg’s War Horse is a film that wears its emotion on its sleeve and you will know whether it is something that you can enjoy inside the first ten minutes.  It is emotionally overwraught and saccharine to the extreme.  Anyone approaching this film with even a modicum of scepticism will likely find it cloying and manipulative.  Steven Spielberg’s portrayal of a farmer’s love and desire to be reunited with his horse is so steeped in weepy, sugary sweetness that the final scene in the film is literally covered in a syrupy yellow-tinged filter.

For that reason I can only conclude that War Horse must have caught me on a good day.  Almost inspite of myself, I found that I was enjoying the story of the little horse that could.

War Horse was originally a play.  This might seem a little hard to imagine when watching the film’s large scale settings but the one clue to its origins is the episodic nature of the film.  Each act tends to move on several years and to a different location from the one before it.

We are first introduced to the colt Joey when he is sold off to an alcoholic farmer who overplays his hand at an auction.  Embarassed that he has blown his savings on an animal that is too weak to plough the crops, he considers euthanizing Joey until he is saved by the farmer’s son Albert.  Albert teaches Joey how to plough and the family farm is saved.

The movie jumps to 1918 at which stage Joey is enlisted in the army and is seperated from Albert.  From there Joey passes hands through several owners, each of whom are affected by the war in their own way.  There is the Captain of an Irish battalion, a French farm girl whose parents have succumbed to sickness, a German solider who trains horses and finally two soliders in the trenches who are on opposing sides of the war.  Each person forms a bond with Joey and uses him as a source of emotional nourishment during a time of horror and conflict.

The film goes to some lengths to show empathy towards all sides of the war.  There isn’t really an antagonist in the film.  These are mostly young men, in a war they barely understand, who find a moment of inner peace when connecting with this awesome, awesome horse.

To enjoy this film is to make a significant emotional investment in Joey.  There are dozens, possible hundreds of other horses and humans that are killed throughout this film.  The emotional cliffhanger of course is whether Joey will finally reunite with his owner Albert and whether they both make it out of the war alive.  I won’t spoil either outcome but needless to say this is a film that is clearly designed to leave the audience a little teary eyed when the credits roll.

Something that the film has to offer over and above the journey of one boy and his horse is some well crafted re-enactments of the first World War that portray the horrors of military conflict within the confines of a PG-rated film.  So obviously there aren’t shots of mutilated soliders picking up their own severed arm ala Saving Private Ryan but in a tactful way, Spielberg has created a film that you could conceivably show to a twelve year old which still effectively conveys an idea of what World War I might have been like.

War Horse won’t be my favourite film of the year and I suspect it won’t be yours either.  It’s a bit too heavy handed.  But its still a great all ages film and there is a scene late in the film where Joey bolts through the battlefield that really stood out to me.  At its lowest points the film tugs on the heart strings a little too hard.  At its best though it manages to be intense, moving and impactful.