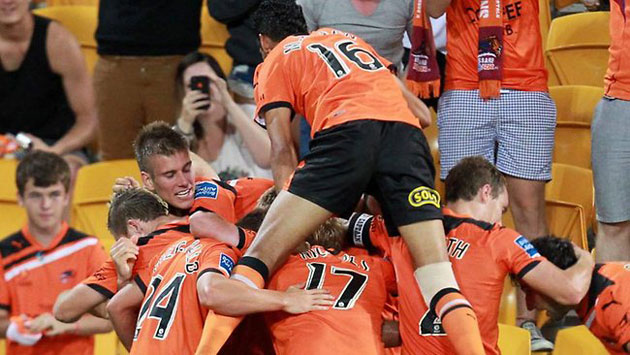 Brisbane Roar played their home leg of the major semi final against Central Coast Mariners last weekend.  It was an opportunity for the side to regain a psychological edge after the Mariners pipped them to the post to win the Premiere’s Plate after nearly squandering a 14 point mid-season lead.  A strange thing about the Mariners is that despite their moments of brilliance this season, they have by far the worst record in the league against the Roar having never beaten them at Bluetongue stadium in 12 attempts and not doing much better at Suncorp.

Both teams fielded full strength squads for the game.  There was drama right from the outset as Henrique was pulled down inside the penalty area in the 6th minute of the game.  He flubbed his penalty kick however which was saved by Mariners’ keeper Matt Ryan.  It is a major concern for the Roar heading into finals football.  The side has scored just two penalties from seven attempts with Henrique, Berisha and Adnan all missing kicks from the spot.  I was interested to learn that Thomas Broich has only taken one penalty kick in his entire career (in the Bundesliga) which he missed.  It doesn’t leave us with many options.

As for Henrique, he made amends immediately by tapping home the opening goal in the corner immediately after the penalty.  He might not be able to score from 12 feet but by God he is lethal from 12 inches out.

The Roar went on to dominate the game, holding close to 70% of the possession and peppering the Mariners goal with shot after shot.

In the second half, there was a brief rally from the Mariners but the Roar finally made good on their chances in the 85th minute when a mazing run from Thomas Broich lured 3 defenders before he offloaded to Erik Paartalu to score a vital second goal.  It finished 2-0 with the Roar looking dominant.  They kept the all important clean sheet at home and head to Gosford this weekend full of confidence.

In the other game, the Phoenix gained a measure of revenge against Sydney FC by beating them 3-2 in an entertaining minor semi final.  Sydney knocked Wellington out of the finals two years ago in a rather dubious fashion when they handled the ball into the back of the net.  I was happy to see Sydney get their come uppance.  The Phoenix will now travel away to Perth to play a rampant Glory side who have won 4-0 and 3-0 in their last two games against Melbourne Victory and Melbourne Heart.  In-form striker Shane Smeltz has scored a ridiculous seven goals in two games.  It’s hard to pick a winner between Perth and Wellington but I’ll be cheering for the Phoenix.

Finally, the FFA have finalized what the A-League will look like in its 2012/13 season.  They have confirmed that Gold Coast United has been removed from the competition and they will be replaced by a newly formed, yet to be named club from West Sydney.  It’s long overdue as the Western Sydney region of Australia has often been referred to as the hub of Australian football.  With 90,000 registered players, it is the home of nearly 20% of Australian footballers.

There has been some pretty widely publicized criticism of the FFA’s actions.  They gave the new Gold Coast owners a near impossible task of raising $5 million in two weeks to stay in the competition.  They apparently raised $4 million and were shown the door.  FFA chairman Ben Buckley stated ‘we are not a bank’ and that the organization would not be propping up any club shortly before announcing that they would be doing just that to support the new Western Sydney club in an agreement that is said to be for 3 years.  At the end of the day, a club in West Sydney appears far more feasible than one in the Gold Coast but the delivery and execution of the FFA’s planning is highly questionable.  The league has been expanding in popularity for the past two years and yet for the second year in a row, a club has folded and been kicked out of the competition.  It is not a good look.  There also doesn’t appear to be a transparent path for a prospective new owner to gain admittance to the league.  Canberra has had investors knocking on the door and attempting to get a club into the competition for nearly four years.  They are yet to gain FFA approval and no one really knows why.

For me, I’m happy to see West Sydney get a club and the Gold Coast situation was clearly untenable.  That said, I’d like to see some stability and long term planning from the FFA.  The Central Coast Mariners are said to be facing financial difficulty and I have no confidence that they will receive adequate support.  I’d love to see new clubs from Hobart and Canberra but who knows how supportive the FFA will be in ensuring these new clubs find the support of the community.

It’s all very messy stuff and distracting from the league during finals season.  Once this month is over and we head into the off-season, I’m sure even more news and discussion awaits on the future of the game in Australia.  The standard of football in Australia has never been higher which means the stakes have never been higher.  And yet, few people would say that they have the confidence in the current administration to handle the long term growth of the game.