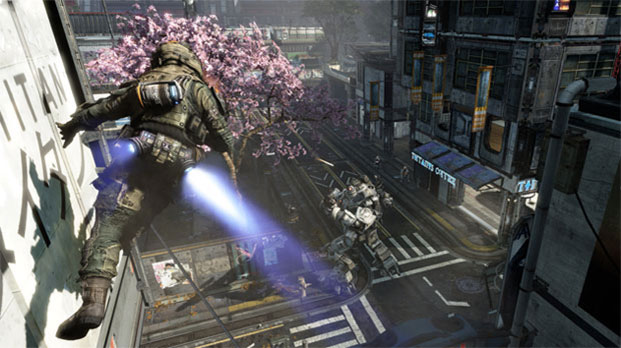 After the post-launch games drought experienced by both Xbone One and Playstation 4 owners, there is welcome respite this month with the arrival of Titanfall and Infamous: Second Son, two platform exclusives, that will have players dusting off their consoles and picking up their controllers.

Of the two games, Titanfall is the more intriguing proposition for me.  Not only is it a new franchise, its the first game from Respawn Entertainment, a new studio built by the creators of the highly influential Call of Duty 4: Modern Warfare.  Co-founders Jason West and Vince Zampella famously fell out with their previous publisher Activision, lawsuits were thrown around and eventually, the pair left to form their own company.

Titanfall is an online first person shooter but that is just about where the similarities end with the Call of Duty franchise.  TitanFall‘s look and feel are closer to the Halo games.  Set in a futuristic sci-fi universe, the mega-corporation Interstellar Manufacturing Corporation (IMC) are at war with the rebel alliance known as the Militia over control of planets that possess valuable mineral deposits.  The story isn’t going to win any awards for originality but it serves its purpose setting the scene for the millions of online multiplayer skirmishes that the game will host.

Although the game exists entirely as an online entity, there is a campaign mode that tells two stories – one from the side of the IMC and the other from the Militia’s perspective.  The narrative unfolds in a chapter by chapter scenario where you play a mixture of online modes (deathmatch, king of the hill etc) and as the combat unfolds, there are scripted sequences, NPC dialogue and audio briefings that move the story along.  I appreciate Respawn’s attempt to try something new to supplant the single player mode in the first person shooter genre (surely the weakest part of any Call of Duty game) but I don’t think they are particularly successful with this approach.

The story moves forward regardless of whether your team is successful or not which massively diminishes the sense of the player’s investment in the story.  I happened to be on a huge string of defeats when I played the Militia storyline but since the events in the narrative move along regardless of your success or failure, it almost felt like the Militia’s hapless defeats became part of the story.  My experience of the Titanfall narrative was that the IMC are a huge, unstoppable omni-corporation and they endlessly defeated the Militia in a series of embarassingly lopsided conflicts.  The End. 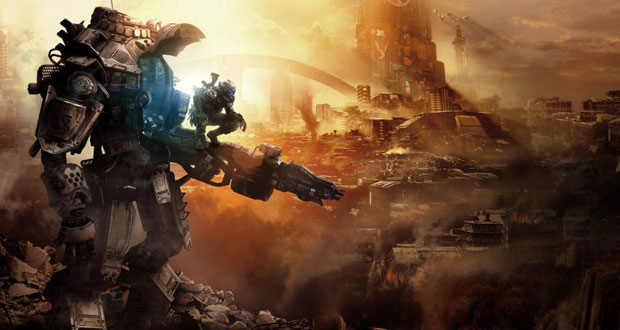 Of course, the bread and butter of this game is the competitive online multiplayer.  To that end, Titanfall is exciting new proposition in the crowded online shooter market, buoyed by the innovations Respawn have introduced to the gameplay.  In TitanFall, players navigate maps in 8 vs 8 combat by bounding through maps in zippy, parkour fashion and periodically, commandeering giant bipedal mechs that can deal out and absorb significant amounts of damage.  The beauty of the game design is that both types of combat are a lot of fun and everyone is given a chance to use a titan.

The on-foot combat when you are in control of a pilot comes with a bit of a learning curve.  Players have the ability to double jump, sprint along walls and pull themselves up off ledges.  Once you become familiar with these mechanics and can string a few of them together, you can actually chain together some pretty exciting sprints that call back memories of Mirrors Edge.  Arguably the kills you get from barrelling through levels on foot in acrobatic fashion are more satisfying than the rocket-launcher rain of missiles that you can unleash in the titan.

To be honest, I feel as though I’m still getting to grips with the titans and perhaps other players are too.  They have a surprisingly varied range of combat techniques including a powerslide, a bullet shield and melee combat but to date, I find that in most cases when I engage in titan-to-titan combat, it simply becomes a war of attrition and whoever has the most health wins.  That said, operating a titan and squishing enemy combatants under foot is never not entertaining.  Same goes for the terrific ejector seat boost that you can discharge when your titan is about to blow up.

An online-only shooter with no genuine campaign mode lives or dies by the amount of content it has and the quality of its online community.  To that end, I think Titanfall is mostly successful in delivering the goods.  There are only three classes of titan but they are each significant in their differences which I think is better than having more options that are just cosmetic.  There is a total of sixteen maps and they have a decent level of polish and versatility about them.  There is definitely enough content here to keep people busy until the first downloadable pack of maps rolls around in a few months time.

Perhaps the biggest obstacle for a casual online shooter fan such as myself is the shallow depth of the community on Australian Xbox One servers.  When I played Titanfall on launch day, I was a level one newbie pitted against wave after wave of Level 20+ players.  A week later and many of them were into their second or third generation of play (a generation goes up by one after a player passes 50 levels) whilst I was ambling along to level 10.  As a result, I find Titanfall to be a game that I enjoy playing but typically do very poorly in and I don’t know if its a fault of the match-making service or simply a lack of other casual players but most of the time, I am playing this game against seasoned COD veterans who run rings around me.

Time will tell as to whether Titanfall‘s community will flourish and expand or simply move on when the next Call of Duty or Battlefield comes along.  For a genre that is pretty stagnant and resistant to change with each franchise iteration, I hope games that try something new like Titanfall can find the audience that they deserve.

Summary : A next gen game that looks polished and actually has some new ideas. It's not always entirely successful in its execution but its to be commended for its ambition.