Wow, the last few days have been as eventful as ever.

Earlier in the week, heard that after police shot dead a well known drug dealer and father of four. As a result there was a riot in Tottenham, and apart from hearing Angela and Robin were safe, didn’t really think too much of it as no one else had been killed, but it was a shame to see what had happened.

Then headed to work on Monday and my current commute takes me to Brixton by bus where I catch the tube to Victoria. The whole usually bustling Brixton high street was cornered off by police tape with the tube closed and there was glass everywhere to be seen. This burnt out Footlocker shop was a pick of the photos to show the damage that was done. 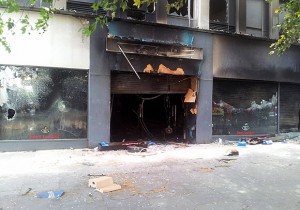 So I went on about my day by catching a bus instead of the tube to Victoria which was the biggest inconvenience. However, it was sad to see Brixton like that though, because I have got to like the area a lot now I live nearby and fear this would change perception again to it being a rougher area that stuck with it in the past. This wasn’t really the case the last three or four years where it was seen more as a trendy vibrant area as opposed to a dangerous one.

Left work later that day and got a text warning me of further riots followed by the man at the front desk at work who never speaks to anyone, warned me to be careful on my way out.

A really eerie feeling after that, could literally sense there was something in the air (as cheesy as that sounds), but it just didn’t feel right.

Got home after a tense bus ride home to see these pictures on TV of Croydon! 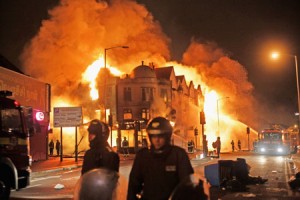 It all felt A LOT more serious now, these kids are literally torching the city! About half an hour later, they were in Clapham which is where I live. Couldn’t help but have a real sense of strong feelings that without any police presence these kids were tearing up Northcote road near Clapham Junction. I love going down there for shopping and drinks and to see it getting destroyed was ridiculous. Got numerous texts from people throughout the evening, my Mum called three times and the whole atmosphere was quite shocking and tense really. Could see black smoke coming from the nearby Peckham as well, couldn’t help feeling a bit under siege and uneasy. It was almost like normal society didn’t exist in the city. 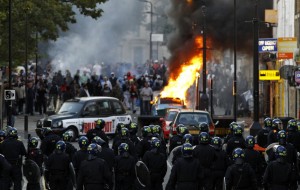 Went to bed quite late after it was clear it had died down, was just such a shame to see the lawless destruction happening to this city where I was born and have lived for the last six years. Knowing this would be broadcasted around the world, its borderline embarrassing.

Went to work late, and was sent home early due to safety reasons and walked past a Hugo Boss shop which was completely smashed up on the way to my bus stop. It seems like anarchy! All the shops were closed in Clapham, boarded up windows, the usual buzz wasn’t there, it was a really empty feeling.

Thankfully London activity has died down a bit but unfortunately other cities in the UK are suffering now, quite badly in Manchester.

Today though the Facebook group supporting the police against the riots almost has a million fans after three days and seeing this photo of people going Clapham Junction to help cleanup putting their brooms in the air was just fucking awesome, feels like the tide has turned and makes me feel happy as ever living in this city again (even though its clearly not finished just yet). 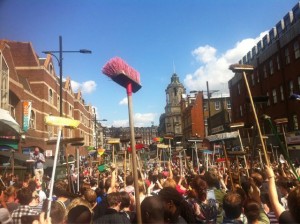 Previous: On the first day of ramadan…
Next: The Holiday Blog