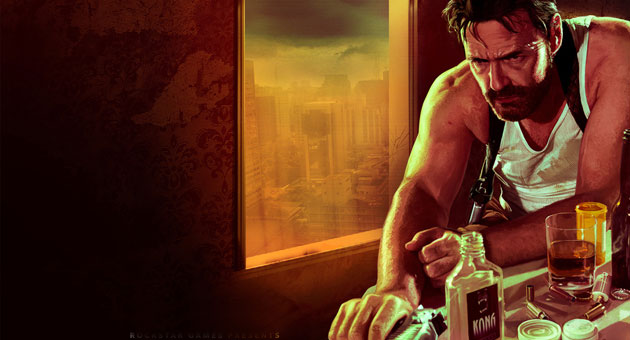 Max Payne 3 is a game that borrows heavily from the late great film director Tony Scott.  Although I’m familiar with the first two games in the Max Payne series, I’ve never actually played them.  From what I can tell, new developers Rockstar weren’t too fussed about carrying over the noirish elements from the earlier installments in the series anyway.  Instead they unofficially made a video game adaptation of the film Man On Fire.

The game cribs the same story of a burnt out American bodyguard in a fish-out-of-water tale where he searches for redemption in a foreign city by rescuing the victim of a kidnapping.  Not only does Max Payne 3 borrow the same storyline, it also recreates the same visual style, using text on the screen to highlight key phrases and adding a liberal coating of washed out orange and blue hues in post production.

Video games have rarely been as gritty and sordid as the content in Max Payne 3.  Rockstar producer Sam Houser chose Sao Paulo for his setting and it’s an inspired idea.  Sao Paolo is a unique cityscape for the story to unfold and the juxtaposition of wealthy businessmen partying in towering penthouse highrises peering directly over poverty stricken shanty towns creates an interesting backdrop for this story.

Rockstar have never been one to shy away from mature content in their games and so it is with Max Payne 3.  The game frequently delves into uncomfortably violent and difficult subject matter, particularly in the scenes set in the slums.  There we see prostitution, substance abuse, organ harvesting and torture.  It wasn’t gratuitously portrayed, but a sequence involving the ‘necklacing’ of one of the main characters, where they are trapped inside a ring of tyres and then set alight, was particularly disturbing to me.  Max Payne 3 attains a level of intensity and viciousness to its environment that is uncommon for video games.

There’s a lot to like about this game.  In addition to its refreshingly mature storyline told in an interesting locale, the game has a great soundtrack and the character animation is superb.  Max can carry a maximum of two weapons but that design choice has allowed for Rockstar to accurately animate his movements accordingly.  If Max is holding an assault rifle in one hand and a revolver in the other, he will actually tuck the larger weapon under his armpit when he reloads the other.  It looks terrific.  The Euphoria game engine which we first saw in Grand Theft Auto IV still does the job effectively here too.  The character models look great and when you have a shootout, there are always sprays of debrit flying everywhere which add to the spectacle.

The game mechanic of slow motion diving and shooting carries over from the original games.  It’s here that Rockstar make a consession to cinematic, arcadey spectacle over realism.  Max is basically made of rubber and can dive anywhere when he shoots, without repurcussions to his health.  He can dive off a balcony and hit stomach first onto the floor below and brush himself off with no ill effects.  The most extreme example of his gumby-like ability to bounce off surfaces was in a shootout at a football stadium where I timed his jumping arc perfectly from the top of the bleachers.  Max veritably dove from Row 33 in the stands to Row 3, popping the heads off of hired goons as he went and when he landed at the bottom, he just got up and kept going.  What a champion.

When it comes down to it though, my biggest qualm with Max Payne 3 is the same issue I’ve had with *almost* every other Rockstar game in the last five years.  I find the storyline and the cutscenes to be really engaging and yet once again, they are completely undone by the game design.  The cutscenes tell me that Max Payne is an aging alcoholic that is so dependant on grog that he almost blacks out when he tries to kick the habit.  This could have presented some interesting gameplay mechanics but in actuality, when you control Max, he is as spritely as Super Mario and as deadly with his aim as Marcus Feenix.

The game has a portrayal of Brazilian slums that evokes memories of the excellent film City of God.  But then it undoes the complexity of its message about poverty stricken people driven to crime by having missions where Max shoots and kills a hundred people Rambo-style without giving a shit about who they are.

I think this game would have been much more interesting as primarily a crime solving detective game with sporadic bursts of action but instead, every single scene in this game is packed with absolute carnage.  Often to unintentionally comedic effect.  Take the cutscene where we learn how Max ended up in Brazil.  He is drowning his sorrows at a bar in New Jersey when a young punk starts harassing him and they end up in a bar fight.  This sounds like a completely reasonable catalyst for leaving the town but the flashback becomes a full length stage in the game with the same number of on-screen enemies as the other levels.  In short, Max has a ‘bar fight’ where he ends up killing 112 people.  It’s just absurd.

Max Payne is far from the only game developer struggling to align story with gameplay.  Max Payne, Uncharted, Grand Theft Auto…they all have this predicament where their slick, well produced cutscenes become a detriment to your immersion in the game because the gameplay is so embarassingly immature by comparison.  Until game developers find new ways to keep us occupied without shooting everything that moves then I think they’re ill advised to try and convince us that Nico is an unlucky immigrant who gets out of his depth, that Nathan Drake is a witty and charming treasure hunter that respects local cultures and that Max Payne is a struggling alcoholic who still manages to make a connection and understand the local people of Sao Paolo

Summary : Like Grand Theft Auto IV before it, this game struggles to reconcile its narrative with the gameplay. This shooter has brief moments where it shines but its also very repetitive.