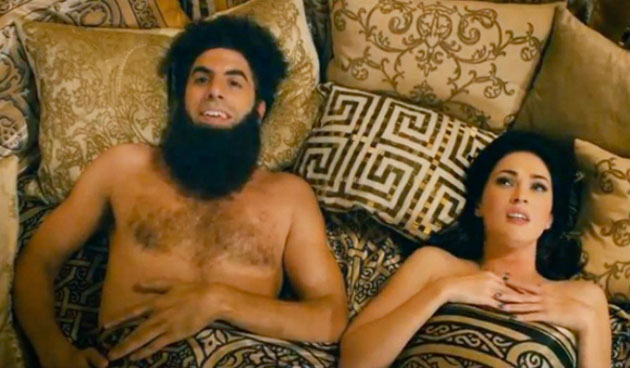 The Dictator is Sacha Baron Cohen’s third bite at the cherry in his now well established cinematic routine of sending a quirky outsider to America.  First there was Borat, then Bruno and now Aladeen, the admiral general and ruler of the fictional Middle Eastern country of Wadeya.

Almost in spite of myself, I enjoyed The Dictator and found myself laughing throughout.  It’s pretty weird.  Usually after a couple of films, you tend to know where you stand with a comedian’s routine.  You like ’em or you don’t.  For me, I liked Borat, hated Bruno and am back on board again with The Dictator.  Though I still have my reservations.

Instead of blending footage of Cohen pranking unsuspecting Americans, this film is constructed as a more conventional comedy and in fact, takes it a step further and even wraps the narrative around a stock standard Hollywood rom-com storyline.

Aladeen is a bigoted, stupid leader whose ridiculous beliefs and bizarre indulgences riff off of modern day despots, particularly the late Muammar Gaddafi and his affinity for aviators and Amazonian guards.  Aladeen travels to America to address the U.N when he is the victim of an attempted assassination arranged by his uncle Tamir who seeks to turn Wadeya into an oil-rich capitalist haven for the Chinese.

Aladeen survives the assassination attempt but stripped of his beard and his entourage, he stumbles around New York as a commoner and eventually falls in love with Anna Faris who plays a left-wing activist owner of an organic foods store.

To be honest, the film is pretty lazy with its shock-humour.  There are plenty of jokes that play on Aladeen’s attitudes towards women, Jews, blacks and disabled people.  It’s pretty well worn material at this stage.  Some of it worked for me, some of it didn’t.

What actually won me over with this film were some of the more pointed gags that fired shots at BP, Dick Cheney, how much it costs to use the Internet at hotels and panelists that appear on 24 hour news shows.  It made me wish director Larry Charles and Sacha actually made more of an attempt to incorporate jokes that weren’t just pre-occupied with Aladeen’s discriminatory beliefs.  We already have Borat and Bruno for that.  Well maybe just stick with Borat.  No one should have to revisit Bruno.

What I did particularly enjoy in The Dictator were the use of some tried and true comedy routines.  I absolutely loved the miscommunication scene in the helicopter where Aladeen and his cohort converse in Arabic and discuss his Porsche 911 and his plans to visit the Empire State Building.  Unfortunately for the other tourists in the helicopter, all they hear is a bunch of jiberish that is punctuated with the words ‘9/11’ and ‘Empire State Building.’  Also, I don’t think we’ve seen a sex scene that superimposed an American Bald Eagle and a slam dunking NBA player since The Naked Gun films.  That never gets old for me.

Many decades ago, Charlie Chaplin made The Great Dictator, a classic comedy that took aim at Hitler and ended with a vigorous monologue delivered by Chaplin that evoked Chaplin’s own feelings on the Fuhrer.  In The Dictator, Cohen has a similar soapbox moment where he takes a rather direct stab at the failings of modern day America.  It could’ve been a more effective scene were it not for the casual use of some pretty racist and sexist humour preceeding it.  Quite frankly, the film doesn’t earn the right to make such a speech.  It sneers too much at whatever target it can find and doesn’t really stand for anything.

And thats The Dictator in a nutshell for me.  Its pretty lazily written but intermittently funny.  There’s not much more to it than that.  Many of the jokes are quite topical and will age the film badly.  It’s funny for what it is but then I expect people will forget the film exists in a year or so.

Previous: Blink by Malcolm Gladwell
Next: TV Show Round Up: Survivor One World Finale, Veep