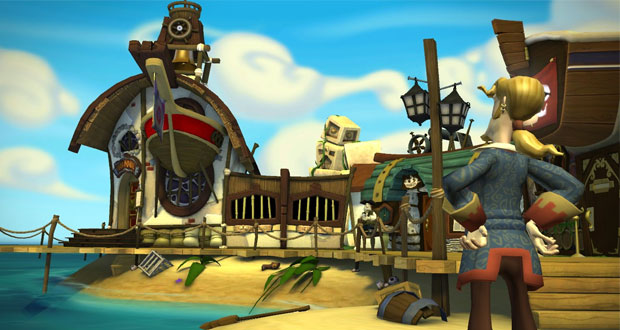 There’s a lot to like about developer Telltale Games and their recent episodic franchises Sam & Max, Wallace & Gromit and now Monkey Island.  They are almost single-handedly reviving the Point ‘n’ Click genre and their treatment of old franchises has been respectful of qualities that made them popular but that hasn’t stopped them from modernising the games either with updates to the presentation and interface.

The new Tales of Monkey Island game is no different.  I’ve played through the first two chapters now and the game delivers.  The writing is fantastic and the quality of the voice acting superb.  I don’t know if it was intentional but the voice actor for the journalist on the island reminds me of Mr Spacely from The Jetsons.

In an ideal world, I’d love to see this genre come back to mainstream popularity.  I want a Grim Fandango movie someday and a re-release of the original game on XBLA and Steam.  Grim Fandango is comfortably my favourite point and click game and The Land of the Dead is probably one of the best gaming environments created.

I’d also like to see someone make a big budget episodic point and click franchise with some Pixar quality graphics or Studio Ghibli quality animation.  The graphics in Tales of Monkey Island actually represent my only real qualm with this game.  They’re stylised but they’re still pretty shitty and bland looking.  I’d prefer a presentation style that embraced 100% hand drawn animation like the Harvey Birdman game.  Also on my wishlist:  different genres of games using this episodic format.  I’d love a courtroom drama or a murder mystery series for example.

One last point:  this is the sort of game I’d like to play co-operatively with the wife before going to bed so a simultaneous release on Xbox Live Arcade would’ve been nice.  Given the recent release of Sam & Max on XBLA, I’m hopeful the complete set of Monkey Island games will make it over eventually.

Summary : It's not a patch on the classic Monkey Island games, but it shows potential for what Telltale Games could accomplish with this episodic format.

Previous: And so it begins…
Next: In The Loop