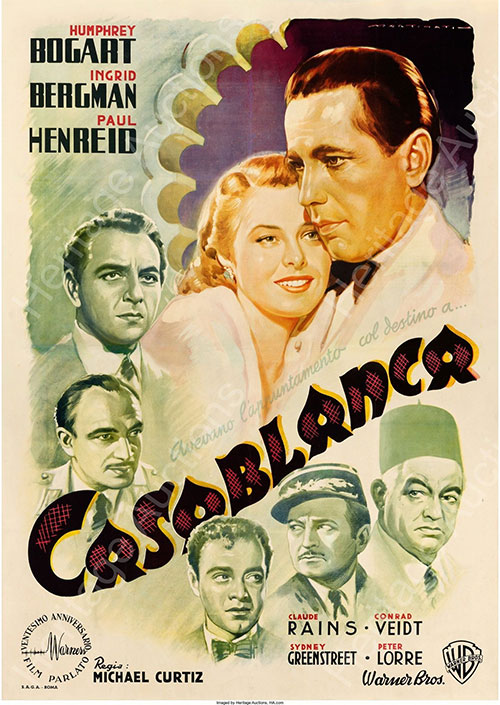 Casablanca is one of my favourite films of all time.  And I don’t say that with any particular qualifier.  It’s not my favourite Golden Age film.  It’s one of my favourites, period.  I have watched it more times than I can count.  I will watch it many times more.  It is as close to being a perfect film as I believe has ever been made.

When I was kid growing up, I knew what Casablanca was before I saw it.  The famous lines – “of all the gin joints in all the world…”, “here’s looking at you kid”, “play it again, Sam” – were lampooned in movies and tv shows.  I think every kid in the Eighties would have seen Bugs Bunny in Carrotblanca.  When I saw the film for the first time, I realized I was already familiar with a lot of Casablanca’s characters and biggest moments.

Nowadays, we can’t actually take Casablanca‘s popularity for granted.  It once was a permanent fixture atop Best Film lists produced by the likes of the American Film Institute and the British Film Institute.  Nowadays it has fallen out of the Top Ten.

The rise of video on demand services like Netflix which have replaced brick and mortar video rental stores have also taken a big hit to the popularity of Casablanca and other classic films.  Their business model is built around getting as many views as possible on the latest content, not educating movie watchers with a curated selection of cinematic greats.  As a result, Casablanca is noticable by its absence from any video service.  What’s worrying is that even when Turner Classic Movies launched Filmstruck, a streaming service dedicated to classic films, it went bust in less than two years.  Modern audiences are getting more and more disconnected from Golden Age cinema.

I hope someone is able to find a solution to this trend.  Whether its another content provider finding a way to connect with younger audiences or the likes of Hulu once again picking up the Criterion Collection as they did a few years ago.  In the meantime, I do my own little part, advocating and recommending these films, whenever the opportunity presents itself. 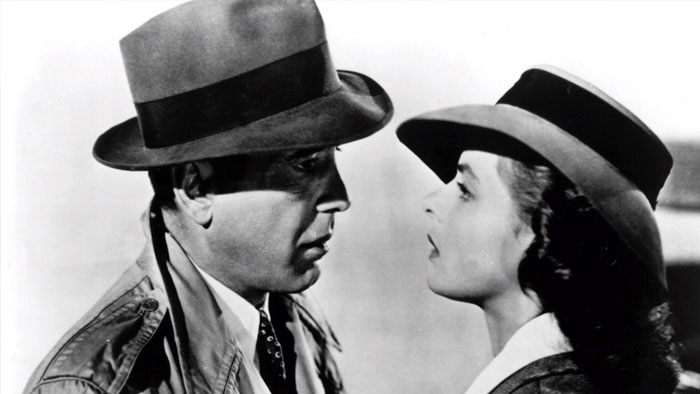 For the uninitiated, Casablanca is a film about Rick Blaine, the owner of a nightclub and gambling den known as Rick’s Cafe Americain.  Set in the early stages of World War II, Casablanca is filled with desperate refugees fleeing for their lives from the Nazis, hoping to get their hands on valuable exit visas so they can make for freedom.  Rick, like the United States at that stage, professes to be a neutral on these matters.  His nightclub is a hot spot where the rich and poor, locals and migrants all rub shoulders together.  It’s existence is allowed and even encouraged by Captain Louis Renault (Claude Rains), the openly corrupt prefect of the police force.

When Ugarte (Peter Lorre), an opportunistic crook who sells “letters of transit” to desperate asylum seekers is chased down by the Nazis, Rick has the opportunity to help him but does nothing, allowing him to be dragged away and killed.  “I stick my neck out for nobody” says Rick.

Rick’s carefully composed neutrality is then put to the test with the arrival of famed Resistance fighter Victor Lazlo (Paul Henreid) and his partner.  Victor is wanted by the Nazis and this draws the attention of German Major Strasser, who comes to Rick’s to bring him down.  This is unwelcome attention for Rick and his nightclub.  The circumstances are further exasperated when Rick realizes Lazlo’s parner is Ilsa Lund (Ingrid Bergman), an old flame from occupied Paris.  Victor and Ilsa beg Rick for help to escape the Nazis.  But can Rick contain his feelings for Ilsa and his wish to remain a neutral in the war? 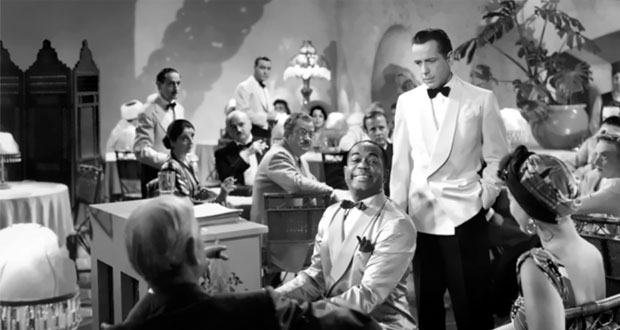 Casablanca wasn’t a particularly big deal when it entered pre-production back in 1942.  Nothing about the film suggested it would have the enduring popularity it eventually enjoyed.  It was made during a time when Warner Brothers were producing a film almost every other week.  Inspired by an unproduced play Everybody Goes To Rick’s, the Warner story analyst charmingly referred to it as ‘sophisticated hokum’.  Although there was some personal investment for Jack Warner to make a film encouraging Americans to engage in World War II (his parents were Jewish migrants from Poland), the film was simply one of many that the studio was making at the time and it was assumed to be something audiences wanted based on the success of Algiers a few years prior.

It was also a film that, by modern standards, would have been described as having a ‘troubled development’.  The screen writers changed hands during the production of the film.  Only the first half of the script was ready when they began filming.  A lot of key story elements – whether Ilsa chooses Rick or Victor, who makes it out of Casablanca on the plane, the final line of the film – all came together during the production itself.  Casablanca is a cinematic triumph where the producers were laying down the tracks as the train was already in motion.

Given the seat-of-the-pants nature of its production, how did it come together so beautifully?  I think producer Hal B Wallis made the right call on all of those critical, unfinalized plot points.  The film doesn’t work nearly as well if Ilsa chooses Rick or if he flees Casablanca at the end of the film.  I also think that for all the instances where the film ran afoul of censors, Warner simply stuck to their guns but changed implicit dialogue into innuendo.  This directly lead to some of the film’s most memorable lines of dialogue when referencing Rick and Ilsa’s romance and Captain Renault’s criminal behavior.  Lastly, despite being one of two dozen films that the studio released in 1942, its clear from reading about the production of Casablanca that Wallis genuinely gave a damn about the film and sweated on every detail.  Even when the casting finally came together and script was 99% agreed upon, they tweaked that thing down to the last minute and that’s how Casablanca ended up with “Louis, I think this is the beginning of a beautiful friendship” as the closing line of the film.

Oh, another reason the film works so well?  Just look at that cast list.  I’m not just talking about Humphrey Bogart and Ingrid Bergman.  It’s the supporting cast that bring Casablanca to life.  Sydney Greenstreet.  Peter Lorre.  Conrad Veidt.  Claude Rains.  Claude Rains, man!  It is an assembly of some of the greatest character actors of that era and they are given some absolutely cracking characters to bring to life.  Rains in particular, as the gleefully corrupt Captain Renault, is one of the shining stars of the film and his friendship with Rick is as important as Rick’s relationship with Ilsa in bringing Casablanca to life.

And of course there’s no doubting that Humphrey Bogart and Ingrid Bergman are absolutely sensational as the film’s romantic leads.  They are big time movie stars in the classic sense of the phrase and all these years later their magnetic chemistry and screen presence is unmatched. 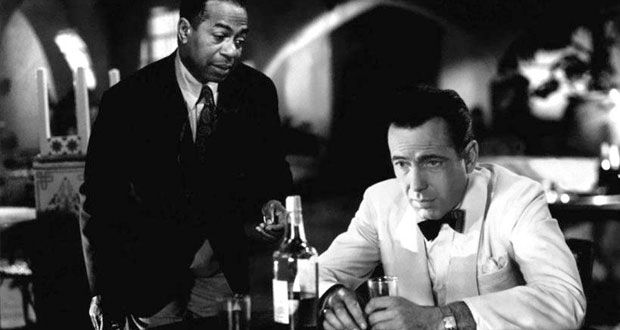 Casablanca is one of those rare films that spans multiple genres and excels at all of them.  Its one of the best romance films ever made.  It’s also one of the greatest war films.  And funniest comedy.  And tensest thriller.  It has more famous lines that have stayed with audiences and become a part of popular culture than virtually anything else before or since.  It has a timeless quality to it that still impresses me to this day.  I think any open minded young person watching the film for the first time will still get swept up in its quality because the values of the film are universal and the cracking wit and sharpness of the dialogue is timeless in its appeal.

If I ever want to encourage someone to discover Golden Age cinema, I start with Casablanca.  It’s a gateway film to a vast library of incredible cinema and it is the most accessible pathway that I know of.  I know because it worked for me.

A cynical nightclub owner protects an old flame and her husband from Nazis in Morocco.

Summary : One of the greatest films ever made. It's a thrilling production that has action, romance and comedy. It has some of cinema's most legendary lines and characters. A timeless classic.

Previous: Sorry To Bother You
Next: The Final Empire by Brandon Sanderson