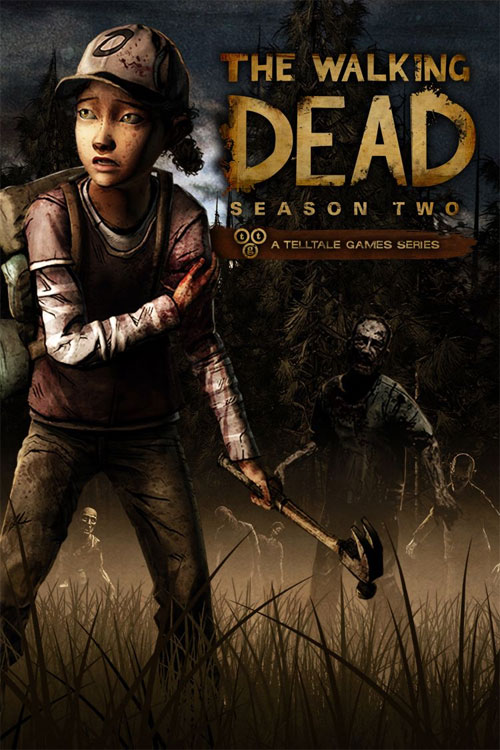 The original season of The Walking Dead video game by Telltale Games was a revelation.  The pioneering development studio who specializes in interactive storytelling delivered a thrilling narrative that was far better than anyone expected or hoped for.  The story arc followed the journey taken by Lee Everett, a college professor and convicted murderer, who travels across America with a young companion Clem who he grooms for survival and independence.  It was one of the best stories told in The Walking Dead franchise, irrespective of medium.  The characters were complex and believable, their relationship ever evolving and by the end of the journey, neither would be the same.  I liked The Walking Dead so much I listed it as my favourite gaming experience of 2012.

So whats in store for Season Two?

The story picks up not long after the events at the end of the first season.  Clem is still alive and a little older, a little wiser.  She re-unites with Omid and Christa, two survivors from the original series.  They encounter a new band of survivors in the woods who include Luke, a young man in his twenties, a Latino family who have a developmentally challenged daughter Sarah and a bickering married couple Alvin and Rebecca, who are expecting a child and have a strained relationship due to an event that both refuse to talk about.  The strength of the first season of The Walking Dead was the richness of the characters and the potential for conflict and difficult moral decisions that arose from their companionship.  Immediately in this new group, players will identify that Sarah has the potential to be a major liability to the group’s chances of survival.  They will also likely sympathize with the hen-pecked Alvin but will keep in the back of their minds a measure of uncertainty in wondering about the nature of his relationship with Rebecca.

As welcome as it is to see fresh faces in this series, I think most players will have the same thought as me and find the new characters to not be quite as engaging as those from Season One.  Which is why it was such a pleasant surprise to see the return of everyone’s favourite redneck Kenny from the original series.

In The Walking Dead comic books and television series, there eventually comes a time when the protagonists happen across a secure fortress that is run by a tyrant.  In those other mediums the fortress was run by The Governor.  In The Walking Dead Season Two video game, that role belongs to a man named Carver.  Clem and the survivors are captured at gun point by a pack of hunters and delivered to Carver’s commune.  They are well armed, sheltered from the outside world thanks to some enourmous iron fences and they are gradually rebuilding a society inside thanks to Carvers strict regiment of labour that he imposes on his prisoners. 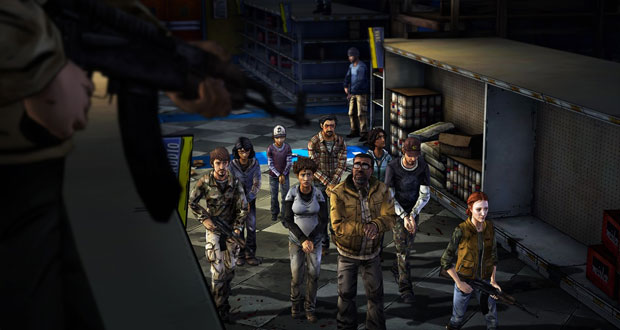 As the conditions get worse for the prisoners, they begin to hatch a plot to escape from Carver’s commune.  Once on the outside, there are rumours of a safe haven in the town of Wellington, which is where Kenny hopes to take Clem and his newly adopted family.

That pretty much makes up the backbone of the narrative in Season Two of The Walking Dead.  With players now familiar with the game mechanics and the scope of how their decision making will influence the story, it was interesting to see how far Telltale could and would push the envelope with this successor.

The short answer is that not much has changed.  Which in some respects is a good thing.  The voice acting is still of a high standard and the quality of the narrative is still much stronger than your typical video game.  I was particularly impressed by how Kenny’s story came together in Season Two.  For most of the season he is an ostracized figure, prone to violent outbursts and appearing to be on the brink of a total breakdown.  And yet in the story that unfolded in my playing experience, he goes to extraordinary lengths to look after Clem and Rebecca’s daughter AJ and when he finally leads them to safety at Wellington, he makes an incredible final sacrifice, giving up his opportunity to find safety and shelter so that Clem and AJ have a better chance at survival.  Reading about the other possible endings, I feel satisfied that Kenny’s story of redemption was probably the most satisfying narrative path I could have experienced.

Where the game is beginning to show some wear and tear is with its game engine and structure.  Those familiar with the original Walking Dead game by Telltale will now understand the limited scope afforded by the game’s branching narrative paths and how often we are presented with false ‘choices’ that are basically an illusion – where regardless of what option we choose, we ultimately arrive at the same pre-determined outcome, no matter what.  The same goes for the minor inconsequential dialogue choices.  We can choose to be friendly or mean spirited in how we allow Clem to interact with the other survivors but now I just roll my eyes when I see that pop up message that ‘they will remember that‘.  I have yet to experience a character change their actions based on what I say so I’d rather Telltale give up the ghost and stop trying to imply otherwise.

The Walking Dead Season Two mostly functions as an interactive storytelling experience but periodically the game will also throw in a simple puzzle exercise for the player to complete.  These are generally rather poorly constructed and are often laughably simple.  The puzzle sections often strain the credibility of the story telling also because Telltale have opted to have the player only ever control Clem.  This leads to a rather daft scenario whereby a group of adults trying to hatch an escape plan effectively do absolutely nothing and are entirely reliant on Clem to retrieve all the equipment and enable their plan.  In the third episode, there is even a throwaway line of dialogue where one of the survivors recognizes this contrivance.  To help give The Walking Dead a more cinematic feel and a chance to flesh out its secondary characters, I think Telltale should feel comfortable in future seasons letting the player control or observe the dialogue exchanges of people other than just Clem.

Having just recently played The Last of Us Remastered, I also couldn’t help notice how rudimentary the cinematography in The Walking Dead is.  I actually really like the art style that the game has and there are plenty of dramatic exchanges between players in every episode.  However, these tend to be shot in a basic single camera shooting style that just flips back and forth between the people talking.  There isn’t much creativity exhibited in how the game shows us a hoard of oncoming walkers or how Kenny and Carver have their physical altercation.  I think this is where the limits of their game engine on Xbox 360 and Playstation 3 is starting to show.  I look forward to the day Telltale make games exclusively for the newer hardware systems and the promise of greater cinematic finesse that comes with that.

Overall, I enjoyed The Walking Dead Season Two.  Clem is still one of my favourite video game characters of recent years and I enjoy seeing her continue to grow and develop in this game.  I’d welcome her return for a third iteration if there is sufficient demand and see that final transition from a scared, vulnerable girl into a kick-ass, survive at-all-costs woman.  That said, you get the feeling that Telltale have hit a ceiling with the technical progression that they are making with these games.  I wouldn’t mind if they dialed back the number of new franchises they are making (Fables, Borderlands, Game of Thrones etc) and spent more time and energy on improving their game engine.  I love what they do and what they have accomplished to date but I feel there is still so much more to be done.

Clem Of The Dead

Summary : A solid, if slightly unremarkable successor to The Walking Dead that gives us more walkers, more drama and more of Clem.