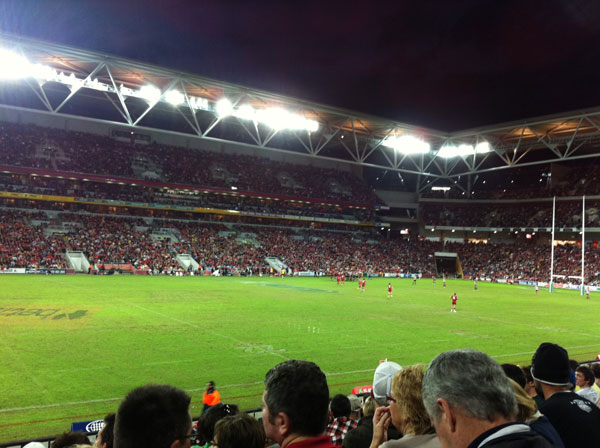 Last season, when the Reds unexpectedly beat the Crusaders 41-20 at Suncorp, it marked the turning point for the side in their transition from being the competition whipping boys to genuine title contenders.  Last season’s efforts eventually petered out towards the end of the competition with the club finishing fifth, one position away from qualification for Finals Football in the old Super 14 competition format.

Fast forward a year later and the Reds are sitting atop the competition ladder having lost just one game in this year’s Super 15 competition.  This game would serve as the latest litmus test for the Reds’ title hopes and in a World Cup year, it also served as a sneak preview of what we could expect between the All Blacks and the Wallabies.  A record breaking crowd turned out for the game which was to be played on a Sunday afternoon with perfect conditions.

The game delivered on the hype.  Although a low scoring affair, both sides battled hard and traded the lead several times.  Towards the final twenty minutes of the game, the Crusaders appeared to gain the ascendancy despite trailing 14-10 on the scoreboard and being down 2 tries to 1.  Two quickfire penalties inside the last ten minutes however, saw them claw their way back to a 16-14 lead.  In the final five minutes of play, the Reds took the ball from inside their own 20 metre line and gradually worked their way down the paddock using their forward pack to great effect.  They eventually found themselves in front of the Crusaders try line and in the final minute of the game, the ref awarded a penalty to the Reds for a Richie McCaw infringement in the ruck.  Quade Cooper stepped up to convert the penalty and the Reds closed out a hard fought game 17-16 to stretch their lead at the top of the competition ladder to 4 points and their unbeaten streak at Suncorp to 12 games.

Just like last year, this game made a believer out of me.  At this stage, the Reds have shown an ability to beat any of the competition heavyweights (Crusaders, Bulls, Stormers, Blues) and the squad appears to finally have the depth to last the season and go the distance.  I’m still not daring to dream about finishing first and achieving a home grand final but its certainly not out of the question.  And who would’ve thought we’d be saying that just 2 years ago. 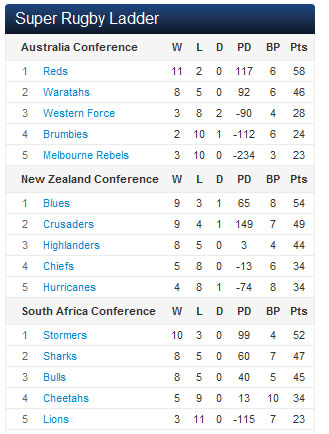 Previous: Source Code
Next: FIFA Elections: Whoever wins, we lose