“Rift could be the closest we’ve come to Star Trek’s holodeck.”

“The Oculus Rift changed my life. No, seriously. My childhood (at least the formative years) was spent reading novels like Neuromancer and Snow Crash, and poring over stories about a future promised by Mondo 2000 and Wired. Virtual reality has long been the ultimate promise of technology — the magic mandala, a doorway to the infinite. But the thing is: it never happened. We got touchscreens, motion sensors, the tablet revolution, body-hacking… but we never got our cyberdecks. Until now. The Oculus Rift actually delivers on the promise, and then some. It’s really, really amazing. Truly and honestly a revelation, a trip, a rabbit hole. And I’m going in. Forever. Goodbye universe. Hello universe“

“…the effect of using the Oculus Rift as you play is mind-blowing.”

“…we found ourselves entirely absorbed; a gaming experience with a level of immersion genuinely unlike anything else we have ever encountered.” 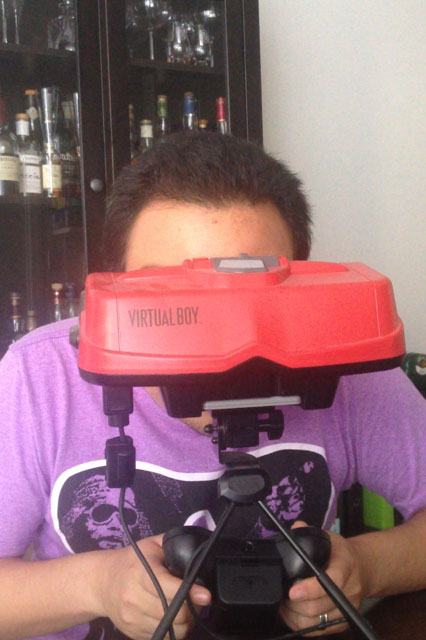 It’ll have a sexier and more market friendly name in a couple of years when it becomes a commercial product but damned if I’m not already hyped like crazy for The Oculus Rift, the 21st Century virtual reality headset that is making a lot of waves at the Consumer Electronics Show in Las Vegas.  It’s already won a handful of tech awards and a finalized development kit will be passed onto to software developers soon.

What makes this technology so amazing you ask?  Well, it’s not like the Virtual Reality concepts of the mid-Nineties which basically plastered a gigantic heavy set of goggles onto your face that smooshed a tiny screen up to your eyeballs.  The reason why people are freaking out when they try out The Oculus Rift is for a couple of key reasons:  firstly, the combination of the head-tracking feature with minimal latency means the Rift adjusts what you see based on how you tilt your head in real time which is critical to the sense of immersion.  Look behind you wearing the googles and you’ll look behind you in the virtual environment at the same time. If all goes to plan, this thing should be released to market in some fashion by 2014.

So what do we do with this thing?  Explore awesome virtual worlds that’s what!  New video game consoles are on the horizon from Sony and Microsoft and with them should come the technology and mass market audience for some amazing experiences.  Hopefully, one day we can play through something like Journey with the Rift.  Just imagine.

Previous: The Brisbane Open 2012/13
Next: TV Show Round Up: Survivor: Fans vs Goats