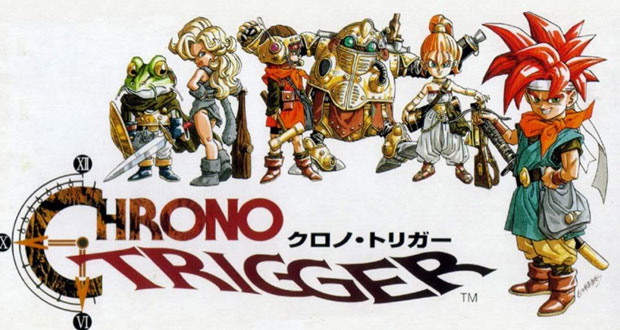 
One of the few upshots of working away from home for three months has been rediscovering portable gaming.  Hauling an Xbox 360 around interstate wasn’t really an option so I’ve been using my DS Lite a lot.  While small-scale puzzle games such as Boggle, Peggle and Rhythm Heaven have taken up a lot of my time, I also took the opportunity to revisit an old childhood favourite from the Super Nintendo.

Chrono Trigger is a game held with a special reverance that is usually reserved only for Nintendo titles from the 16-bit era.  Square’s frugal treatment of the franchise (only one sequel and a lone re-release on Playstation 1 till now) has probably helped garner its mystique whereas the recent E3 announcement of the ten billionth variation of Final Fantasy has probably helped steam-roll that franchise to a point of indifference for me.

Having played Chrono Trigger through to completion for the first time in over a decade, its interesting to see how well the game has aged.  In fact, its actually somewhat depressing to see how so many of the game’s player-friendly features didn’t turn into staples of genre considering how stagnant J-RPGs feel this current generation.  Chrono Trigger has a memorable cast of characters, a simple and effective storyline that appeals to a broad audience, no random battles, no grinding, takes just 12-15 hours for the main quest and contains a plethora of side quests that are rewarding for both loot and extra character development.

Its possible that part of what makes Chrono Trigger so good is the technological constraints placed on the game which allows the player to use their imagination to supplement the charming, yet simple, visuals.  The protagonist Crono is a gaming avatar that almost anyone can project themselves upon.  He has an ambigious age and ethnicity, a robot and a talking frog for friends, he doesn’t say anything stupid and he gets to save the world.  Whats not to like? 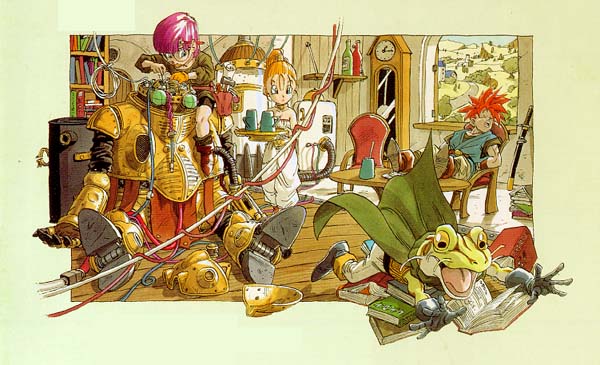 Chrono Trigger‘s effectiveness in its storytelling comes a lot from what it doesn’t show as much as what it does.  For instance, the game doesn’t show any intimate scenes between Crono and Marle and yet their marriage at the end of the game comes as a surprise to no one as the chemistry between the two of them makes it clear whats going on throughout the story.

This narrative technique actually allows the game to tell a rather dark story for the character Lucca in the confines of a E10+ rated game (suitable for anyone ages 10+).  Lucca is Crono’s bespectacled platonic friend and the daughter of an inventor.  Outwardly, she has quite a cheerful disposition.  The playable characters in Chrono Trigger all have an objective they wish to attain, not unlike the four principal characters in The Wizard of Oz.  Frog is looking for redemption, Robo wants to attain humanity and Marle wants independance.  Lucca seeks closure on a mechanical accident involving one of her inventions that claimed her mother’s legs.  When Lucca revisits this moment in the game, she remains unable to change this sequence of events.  She unsuccessfully tries to change her mother’s fate under cover of darkness when the other characters are asleep and only confides the story of her failure to Robo.

By the end of the game, all the other characters move on with their lives.  Yet Lucca is reduced to making new robot friends for companionship and has no closure other than acceptance for what happened to her mother.  Its a bittersweet ending for Lucca and yet the game never really has to hammer home that point.

Fifteen years later, it is still uncommon for developers to create a subtle story arc that is as effective or moving.

On a different tangent it must be said that the music in Chrono Trigger is also a high point and once again, its something of a minor miracle how much the game’s composers are able to get out of the Super NES sound chip.  The score remains excellent throughout the entire game and age hasn’t dimished its effectiveness one bit in aiding the story-telling.

There’s pretty much nothing bad I can say about this game.  Not unlike The Legend of Zelda: A Link to the Past, I feel as though these games have a mastery of their technology and feature an almost perfect storm of game design and characterisation.  Like revisiting a good book, I believe there is plenty more that Chrono Trigger can offer the player if they choose to revisit it and if you’ve never played before, I’m sorry I didn’t give you a spoiler warning in advance.  It’s short, sharp and never gets dull.  One of the best of its generation.

Back to the Future.

Summary : It's 20 years old and hasn't aged a day. To my mind, a perfectly crafted and timeless JRPG.

Previous: Blogging return
Next: Weekend of Facebook and Football 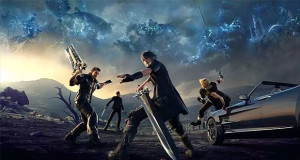