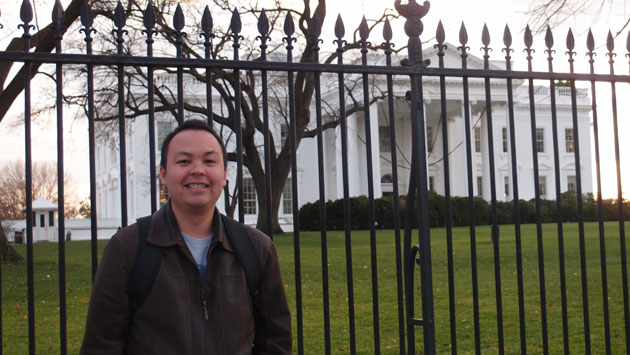 Washington D.C – the nation’s capitol!  We flew in from San Francisco and had two days to go exploring.  I didn’t know a whole lot about American history before I arrived here but I watch a lot of The West Wing so I have a vague notion of what the famous landmarks are.

When I think about the various countries I’ve traveled to, there aren’t many that pride themselves on their political heritage like the Americans do.  I can’t really say that people find the Beehive in Wellington or Kirribilli House in Sydney to be particularly interesting historical landmarks worth visiting.  They’re just sort of there.

In principle, I believe America has it right.  They have a proud tradition of celebrating their hard fought freedoms after the Civil War and Washington D.C has plenty of monuments that celebrate and acknowledge the important contributions of political giants that have shaped the fortunes of the country in its history.  Everyone knows who Abraham Lincoln is and how he freed the slaves.  By comparison, I don’t know who overturned that rule in Australia that upgraded Aboriginals from fauna to people with actual human rights and that only happened sixty years ago.*

If you’re thinking of visiting The White House when you come to D.C, you’ll need to plan well in advance.  You can apply for a tour through your local embassy.  Jen and I explored the option but it wasn’t going to happen because a) we left it too late and b) we have different passport nationalities which makes the whole thing a pain in the ass. Me And My Segway Scooter

A great way to see the major landmarks in D.C is to take up one of the Segway tours.  These things are super easy to learn how to use and it makes getting from the Washington Monument to the Thomas Jefferson Memorial a piece of cake.  In D.C it’s legal to ride a segway on the roads and on the footpath so you can get around really easily.  Doing a segway tour, you should see the bulk of D.C’s famous monuments in a little over 3 hours.

Since it was winter, the tour we went on was relatively small.  There was a group of backpackers from Wales, a daddy and daughter from the Mid West who were in town for the daughter’s music recital and that was about it.  It made the tour a nice intimate little affair where there was plenty of opportunities to ask the tour guide questions. 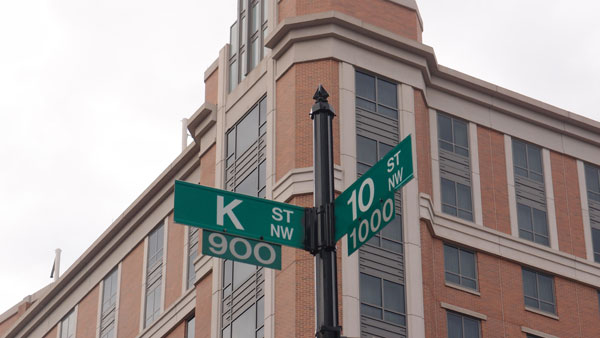 Washington D.C has the least interesting street names in the world. There is a grid of streets that are letters A to Z and they are bi-sected by streets numbered 1 to 26. How exciting.

When we were visiting Washington D.C, it was nearly Christmas but senate was in session and Obama was in the West Wing trying to hash out a deal to avoid going over the fiscal cliff.  At the time I sort of thought it was a big deal but the pattern since then is that the country has stumbled from one manufactured crisis to another as the two parties stonewall one another on fiscal deadlines which get a sexy new name each month.  Fiscal cliff, debt ceiling, the sequester…and so on and so on. 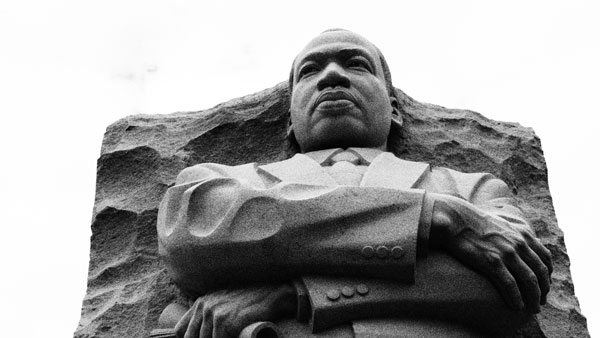 New monuments in Washington D.C are built all the time. This statue of Martin Luther King was only finished in 2011. I don’t know why but it makes me laugh how angry he looks. Angry and disappointed.

Even if you don’t have any prior knowledge of America’s founding fathers, if you’re like me, you’ll find the Washington monuments to be fascinating structures.  I like the care and consideration that has been put into each building and how they align geographically with one another.  For instance, the Thomas Jefferson memorial is in clear line of sight with The White House as if he is overseeing and protecting the building.  The Reflecting Pool is situated by the Korean and Vietnam War Memorials.  And at the centre of all this is the gigantic Washington Monument.

The Lincoln Memorial is perhaps the most famous of the monuments in D.C but I found the Jefferson one to be most interesting to me.  He is obviously an incredibly intelligent and articulate man and the quotes that adorn his memorial suggest that he was a moderate, forward thinking individual who’s restraint and compassion are sorely missed in contemporary American politics.  One particular quote caught my eye, particularly in the context of the American Constitution which Second Amendment Advocates point to as a reason why the founding fathers would support their cause to bear arms to this day.

“Laws and institutions must go hand in hand with the progress of the human mind. As that becomes more developed, more enlightened, as new discoveries are made, new truths discovered and manners and opinions change, with the change of circumstances, institutions must advance also to keep pace with the times. We might as well require a man to wear still the coat which fitted him when a boy as civilized society to remain ever under the regimen of their barbarous ancestors.” – Thomas Jefferson

It’s right there!  The goddamn dude is saying right there that you need to keep updating and amending the damn thing as a living breathing document to suit the times.

When you read the rest of his quotes in the memorial that talk about respecting all different faiths, valuing education, providing liberty and freedom for all…I couldn’t help but think what a visionary Jefferson was.  And how crushingly disappointed he would be if he were alive today to see the dysfunctional state of American politics. 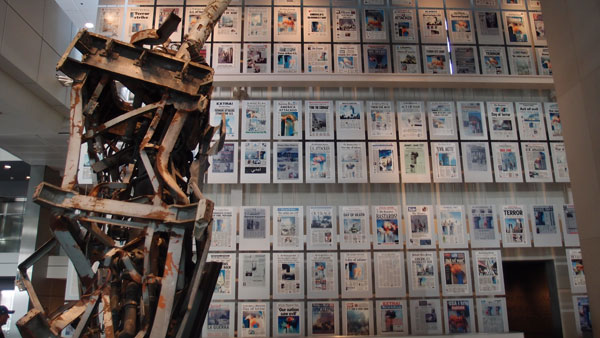 The 9/11 Headline Wall in the Newseum.

There’s no reason not to see all the monuments in Washington D.C and you should be able to do it all in an afternoon.  The Roosevelt Memorial is another highlight.  The man served four terms as president, the greatest number in their history and the memorial takes the form of a peaceful garden with water features that reflect the events of each term that he served.

If you have the time, its worth having an extra day or two in D.C as they have some of the best museums in the country.  There are the widely recognized museums of course, such as The Smithsonian, The Holocaust Memorial and the National Air and Space Museum.  But even the lesser known museums such as the Newseum are worth visiting.

We spent half a day in the Newseum and were fascinated by the breadth of their coverage of news media and journalism in both America and the rest of the world.  There are all sorts of fascinating wings to this museum including a section that shows every Pulitzer Prize winning photo, a 9/11 newspaper headline section, a news headlines from around the world section and famous news headlines from world events (moon landing, Kennedy assassination and so on). 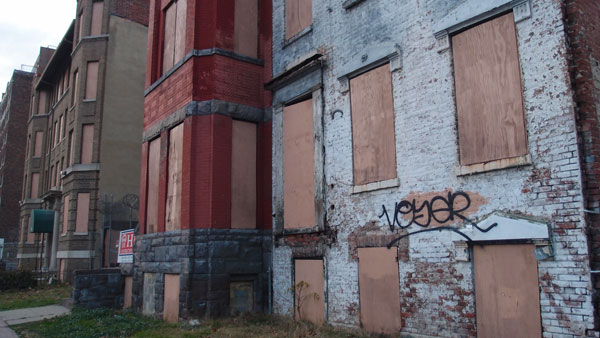 At one stage, the severity of Washington D.C’s gun crime was enough to rechristen their NBA team from the Washington Bullets to the Washington Wizards. Visiting the touristy areas you feel totally safe but even near our hotel there were a couple of dodgy looking side streets.

On another note, I have no idea why, but Washington D.C has some of the cheapest taxis in the country.  We were taking a train to head out of D.C to New York and it was a twenty minute ride from the hotel to the station.  The journey came to a measly $10 bucks.  The same journey in Vegas or New York would be twice as much.

It was on the train ride from Washington D.C to New York that I realized how small some of the American states are.  I always remembering reading that Vice President Joe Biden took a train from his home state of Delaware to Capitol Hill every day.  What a guy! I thought.  Here he is taking this long journey to work every day.  I imagined it would take him a few hours each day to get to and from work.  Turns out Delaware is like twenty minutes away by train.  We passed about four different states heading to New York.  So technically, I can say I visited Philadelphia, Baltimore and New Jersey. 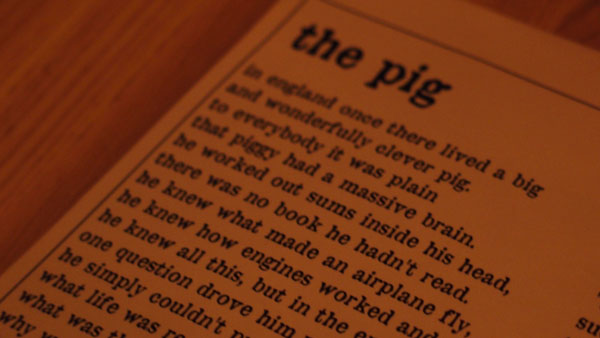 One of the coolest places we ate at in America was this pig-themed restaurant that was inspired by a Roald Dahl poem about an intelligent pig who kills and eats his farmer.

The train ride from Washington D.C only took a couple of hours and it was a nice change of pace from travelling domestic airlines.  Next up, New York City.

Previous: Mila Kunis interview for Oz: The All Powerful
Next: That Rug Really Tied The Room Together