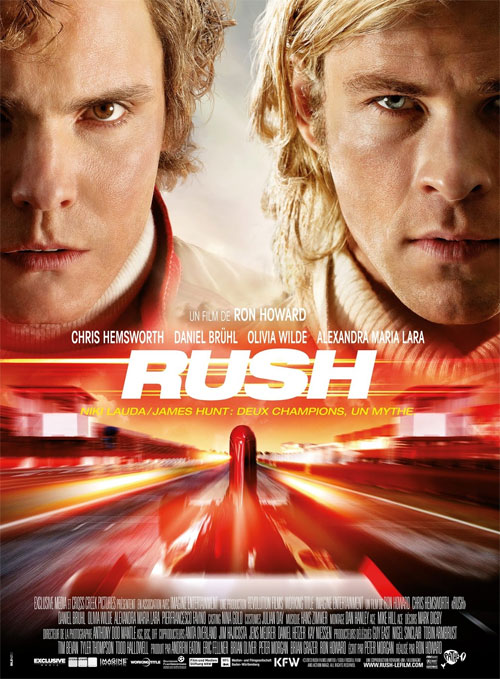 That 1976 Formula One season must have been one hell of a spectacle.

As a lapsed F1 fan who watched predominantly during the Nineties, I can recall just one season where the championship was determined in the final race.  Although the lead up was exciting, we didn’t exactly get a Hollywood ending.  Michael Schumacher, who was ahead of Damon Hill by a single point, crashed into him ‘by accident’ halfway through the final race, ruling them both out and ultimately winning the competition.

The 1976 Formula One season on the other hand, offers up drama on a whole other level.  I knew nothing of the season before I watched the film and once the credits began to roll, I immediately went home and did some research on Google to discover that very little had been embellished or sensationalized.  What we see in Rush is more or less what happened.  Two incredible race drivers – the flamboyant James Hunt and the reserved Nikki Lauder – both at the peak of their powers, squared off in a season of racing that involved incredible drama both on and off the racing circuit.  Both Hunt and Lauder seem to have lead improbably dramatic lives that lend themselves perfectly to a cinematic retelling.  Even though the film does not cover it, I learned that one of the drivers eventually passed away just one day after proposing to their girlfriend.

Rush is a fantastic character study and it requires no interest in motorsports to appreciate.  If anything, part of the film’s charm is exploring a sporting environment that is absurdly dangerous and unprofessional by today’s standards.  Lauder repeats a mantra that he can accept a ‘20% chance of dying’ on race day.  When it rains on the Barcelona circuit, he protests and suggests the race be cancelled as any percentage higher would be ‘unreasonable’.  In his narration at the start of the film, he explains that there is an average of two deaths per Formula One season.  Such is the mind-boggling reality of Formula One safety in the Seventies.

The window dressing in this film is fantastic and offers perfect cinematic escapism for the viewer.  James Hunt was apparently a ridiculous real life Austin Powers, having bedded over 5000 women in his lifetime and having such ungodly talent that he could have champagne and caviar in the pit lane, moments before the start of a race.

Nikki Lauder is equally mesmerizing although for completely different reasons.  Born to wealthy Austrian parents who disapproved of his career choice, Lauder actually makes his debut in Formula One ahead of Hunt, despite Hunt having better results, thanks to Lauder’s extraordinary business acumen where he strong-arms Ferrarri into making him their lead driver.  He is awkward with women and has few friends yet he is single minded in what he wants and ruthless in pursuing results.

And that gives us all the trappings for a fantastic film.  It is a credit to Ron Howard, Chris Hemsworth and Daniel Bruhl that Rush is an absorbing watch both on and off the circuit.  The racing sequences capture the chaotic mayhem of Seventies Formula One wonderfully well.  The cars travel at fantastic speeds and yet they seem to be made so delicately that a single bolt coming loose could lead to disaster.  Off the circuit, Hunt and Lauder are such interesting larger-than-life characters and so much drama occurs in both their lives during that ’76 season that you wonder how anyone had any time to focus or plan for the next race.

Rush is a near perfect sports film that studies two different mentalities in pursuit of sporting excellence.  I don’t think either Hunt nor Lauder are necessarily that relatable to the average person and in the modern sporting world, you sense neither would be able to do what they do in this day and age.  And thats what makes Rush so interesting.  It perfectly captures a bygone era.  As the tagline puts it: “when the sex was safe and the driving was dangerous”.

Summary : A riveting tale of a wild and bygone era in Formula One. Hemworth and Bruhl are magnificent.