Don't Miss
Home > Video Games > This War of Mine: The Little Ones

This War of Mine: The Little Ones 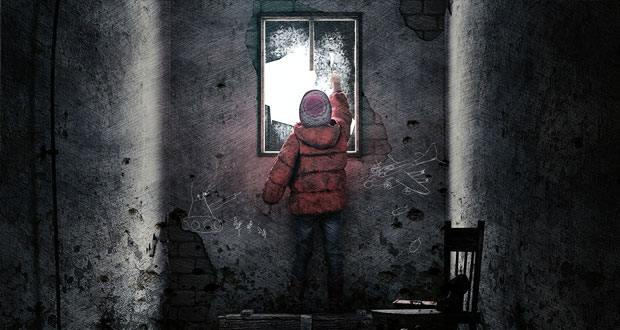 Historically speaking, the video game industry does not have a great track record when it comes to social commentary about warfare.  The vast majority of titles are couched in a simple, patriotic presentation style with explicitly defined heroes and villains.  Holding a gun mean that you – the good guy – shoot a bad guy to complete a mission and ‘win’ the war.

Occasionally, there has been attempts made to portray the victims of military conflicts but often the results have been spectacularly crass.  At their lowest ebb, Activision gave us Call of Duty: Modern Warfare 2 and its notorious No Russian stage in which players took on the role of terrorists massacring innocents in an airport shootout.  Devoid of any context or sensitivity, the mission was basically presented as a morbid, senseless shooting gallery.

In recent years, this has begun to change.  Valiant Hearts: The Great War and Spec Ops: The Line are two examples of games that viewed warfare with an uncommonly measured and weary gaze.

Which brings us now to 11 bit studios and their civilian-focused survival game This War of Mine: The Little Ones.  The game includes the original title released on PC in 2014 as well as some additional content – namely the inclusion of child characters.

Inspired by the Siege of Sarajevo in the Bosnian War of the mid Nineties, This War of Mine portrays everyday men and women who are caught in a crossfire in the fictional city of Graznavia.  The player controls a handful of individuals who take refuge in a shell-shocked house that has been abandoned by its original inhabitants.

Resources are scarce and the survivors will have plenty to contend with if they are to stay alive.  Food, water and shelter are all vital.  But there are a myriad of other challenges.  Looters and bandits remain a constant threat.  The climate is not always hospitable.  And scavenging for supplies, guarding the house and fending off attackers takes its toll.  The survivors will battle exhaustion and their own feelings of desperation and hopelessness.

It’s not all doom and gloom however.  This War of Mine pits the survivors in a harsh and unforgiving environment but occasionally, they will enjoy fleeting moments of happiness.  They may enjoy the simple pleasures of reading a book, listening to the radio or playing a guitar.  A stressed out chef might find solace in smoking a cigarette or maybe a news journalist finds the strength to hold out a little longer when she sips a cup of coffee.  These tiny slivers of life’s simple pleasures feel like well observed details of how terrified, stressed and depressed men and women survive being trapped in a city under fire.

At its core, This War of Mine is a resource management game.  It’s possible to survive a few days, maybe a week, by sneaking out at night and raiding nearby schools, hospitals and supermarkets.  But eventually these places will be picked dry and the risk of encountering hostiles will increase.  For longer term survival, its becomes critical to develop a self-sustaining method of producing food and water as well as some sort of commodity such as alcohol or cigarettes for trading.

As it should be, This War of Mine is a difficult game.  I suspect that for most players, early attempts to run and gun through a resource-rich territory will be met with instant failure.  The playable characters in the game are ordinary people, not super heroes, and a single bullet can be enough to bring them down.  Even in my most successful run-through the game, the characters were always on the precipice of disaster.  They were either starving, exhausted, deeply depressed or in most instances, some combination of all of the above.  But I found that because the game was so difficult and the motivations of the characters were so well realized, I became particularly invested in their fate.  I badly wanted my trio of Pavle, Bruno and Katia to survive the winter and make it to peacetime.  The stakes only felt higher when Kalina, a war orphan, joined the group.

11 bit studios are to be commended for what they have achieved with this unique and absorbing game.  This War of Mine has sky-high ambitions for the emotional register and atmosphere they’re trying to build and on the modest budget of an independent game it could have easily fallen flat.  But the narrative passages, the distinctive charcoal art aesthetic and the well-designed game mechanics successfully bring that ambition to life. 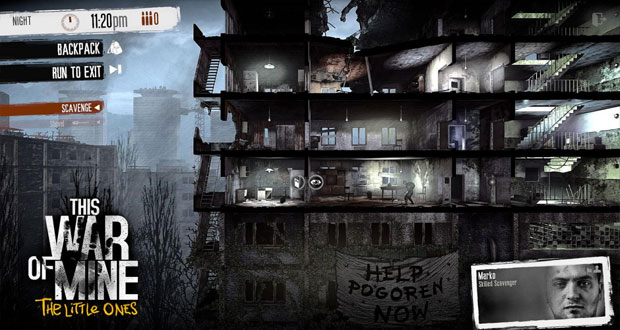 Key to its success, the game manages to create distinctive, believable personalities out of each survivor.  Occasionally, This War of Mine is overt in communicating its game mechanics – Bruno is a ‘good cook’ so he requires less ingredients to produce a meal – but there are also some other subtle traits that they have.  Bruno is a smoker and thus more susceptible to illness.  Oh, and he’s lousy with kids.  Learning these traits as you play really adds to the experience of the game.

This War of Mine is an open ended experience with plenty of scope for player choices but there are also some broad chapter markers that shape the story.  There is a harsh winter to endure.  A fortnight where crime is rampant and bandits constantly raid your home.  And a home stretch where an end to the conflict is on the horizon but your survivors are running desperately low on resources.

Which brings me back to the good guy with the gun scenario.  In my playthrough, Pavle was a talented scavenger and a favourite of Kalina, the orphan.  As we ticked over the 40th day of the siege, our supplies had run dry and Kalina was starving.  In an act of desperation, I took Pavle scavenging to another house where an elderly couple and their son resided.  They had canned goods in their fridge.  The elderly couple weren’t physically capable of putting up a fight but the son was.  This was not a ‘scripted’ moment in the game.  Organically, I had reached a point where it was him or me.  Food for the elders or food for the child.  Pavle had a gun.  The man in the house didn’t.  I’ve played plenty of video games that put a gun in my hand but none of them ever forced me to make a choice like this.

Challenging, creative and engrossing, This War of Mine is one of the most unique games available on the Playstation 4.  There are plenty of games about war but there’s nothing quite like this.

This War of Mine: The Little Ones

This War of Mine: The Little Ones explores the hardships of wartime survival as seen from the perspective of civilians trapped in a city under siege.

Summary : Original, thought-provoking and superbly executed, This War of Mine explores the cost of military conflict in unflinching and confronting fashion.

Tagged with: 11 bit studio Deep Silver Playstation 4 This War of Mine