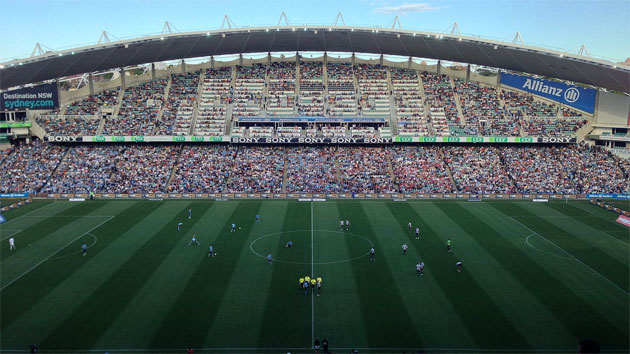 Round 3 of the 2013/14 A-League season was probably a lot more notable for events that occurred off the field than on it.  As expected, Ange Postecoglou was named the new coach for the Socceroos, the first Australian coach for the national side in over a decade.  Coincidentally, his final game with Melbourne Victory was against the team where he earned his name and reputation – the Brisbane Roar.

The round was also notable for an attendance record being broken in the Sydney derby as over 40,000 fans attended the Sydney FC vs Western Sydney Wanderers game.  Similar to the Roar vs Sydney FC game from last week, it would be sensible to temper any beliefs that the Wanderers were a spectacular side on the night without at least acknowledging that Sydney FC are playing some of the worst football we’ve seen in the competition in years.  Without Del Piero, the team seem genuinely lost and without a game plan.  Only Rhyan Grant seemed to show any hunger or passion for the Sky Blues.  He of course would go on to have a season-ending injury in the first half which pretty much sets the tone for Sydney’s season ahead.  Surely they must be one of the genuine contenders for the wooden spoon.

The massive attendance figures in Round 1 and Round 3 of the competition are drawing the attention of the Australian media which is generally indifferent to the A-League unless they can run a football hooligan story.  This week however saw some unequivocally positive articles speculating whether the code could become a genuine rival to NRL and AFL.

Adelaide United, under former Barcelona youth coach Josep Gombau, seems to have transformed his Adelaide team into the Brisbane Roar team of 2012 that lost five games in a row where they dominated possession and were completely toothless in attack.  The Central Coast Mariners scored in the opening minute of their game which Adelaide went on to dominate over 60% of the possession, complete over 200 more passes and yet not manage a single shot on goal.  Gombau said he was happy with teams performance and believes the results will come.

Do you like goals?  Well, you would have hated Round 3.  A measly five goals in five games were scored and its pretty reflective of a competition that currently has Del Piero, Smeltz, Berisha, Kewell and Newmann on the injury list.  Commiserations go out to my brother who went on a road trip to watch a dour scoreless draw between the Phoenix and the Jets.  Napier is a long way to travel for nothing.

Hopefully Round 4 will yield better quality on the field.

Can The Roar Win With 1 Striker? (no)

What learnings can we take from Brisbane Roar’s 1-0 defeat to Melbourne Victory?  The team played well enough and the midfield and defensive formations put together by Mike Mulvey look very sound.  However, without Berisha, the team are woefully deficient in attack.  As expected, the four goals from last week was probably more reflective of how awful Sydney.  Young Kwame Yeboah was given a start against Melbourne Victory and he looked all at sea, lacking Berisha’s strength on the ball and his natural poachers instinct.  Henrique came on in the second half and was an improvement but he lacks the fitness to play a full ninety minutes and his best days are behind him.  Which leaves…absolutely no one else.  Berisha is in a race against time to get fit for the game against Melbourne Heart but the bigger question for Mike Mulvey is what he’ll do long term when Berisha is either injured again or experiencing a downturn in form.  He cannot be counted on to deliver all the goals.