Reality tv meets gladitorial combat is a popular concept for horror films and its one that transcends cultures.  In the West, we have The Running Man, Series 7, Ender’s Game and The Hunger Games.  In the East, one of the most popular film adaptations of this concept is Kinji Fukasaku’s violent and melodramatic Battle Royale.

Based on a manga of the same name, Battle Royale portrays a near-future Japan that has devolved into anarchy with children refusing to obey their parents and running amuck in the streets.  In an attempt to impose their will, the adults of Japan devise an annual lottery in which one classroom is randomly selected to participate in The Hunger Games…er, Battle Royale.  The students are shipped to an island and are fitted with explosive neck braces.  They have three days to compete in a gladiatorial fight to the death with the winner being granted their freedom.  Each child is given a random weapon (ranging from crossbows and guns to pots and pans), a map and a hasty induction via a hilariously enthusiastic induction video. 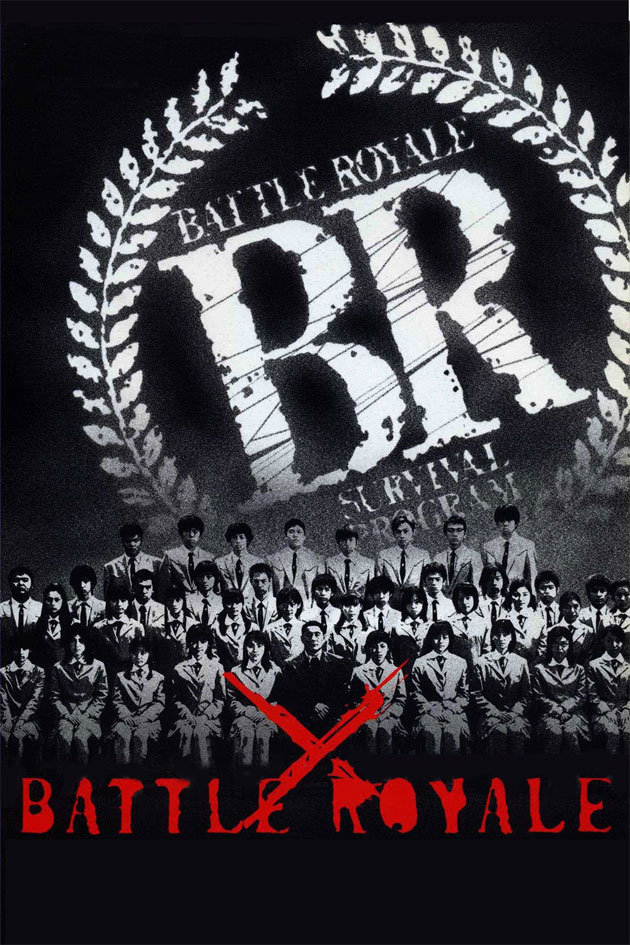 Once the induction video is complete, the Battle Royale begins and for the rest of the film, we more or less get to see 30 students compete in a fight to the finish.  It’s a lot simpler and streamlined than something like The Hunger Games which contextualizes its violence a lot more with additional lore about the society that created this construct.

What I like about Battle Royale is that it begins with an outrageous concept but it plays it straight and explores a plethora of highschool dynamics and how they would react to this situation.  Bullies and jocks quickly assert themselves, killing the weaker children and taking their weapons.  Cliques of friends band together to maximize their chance of survival.  Some students take the opportunity to confess their crushes and profess their undying love for one another.  It sounds like an impossible feat but Battle Royale crams thirty students into its 2 hour running time and finds a way to give almost all of them an identifiable characteristic and a mini story arc.  In the same way that Love, Actually tells the story of about 10 different relationships in a single film, Battle Royale is equally economical and efficient in its story telling. 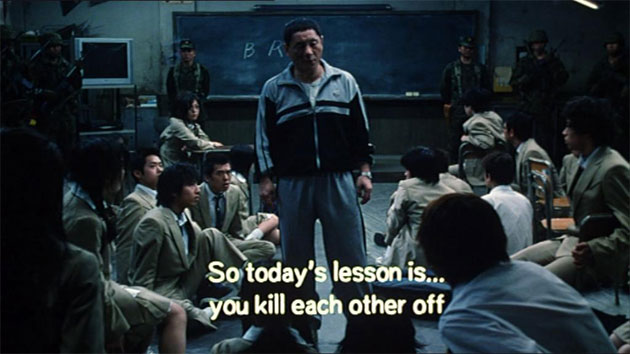 All of this of course would still make Battle Royale a shapeless mess if there wasn’t a clear protagonist and antagonist.  Battle Royale delivers on both fronts.  The lead role falls to Shuya, an everyman student who relies on his diplomacy and quick thinking to survive on the island.  He is logical, methodical and seems a good chance to make it to the end.  His only liability is that he has pledged his life on ensuring the survival of his platonic friend Noriko.  The film’s villain is the teacher Kawada, played by Beat Takeshi.  Kawada is a weird one.  He is ruthless and unfeeling in his running of the Battle Royale but as the number of students remaining begin to dwindle, we begin to learn that he has a vested interest in the success of a particular student and this could compromise his ability to see the competition through to completion.  Takeshi is a legend of Japanese cinema and he is fantastic in bringing the character of Kawada to life.

It’s clear from its 18-rating and banning in several countries that Battle Royale is an order of magnitude bloodier and darker than its contemporary counterpart The Hunger Games.  This is not necessarily a recipe for a better movie in of itself.  The film’s storyline is definitely a product of its country, with its fixation on respect and the cultural differences between the country’s youth and their elderly.  Happily, I feel as though a lot of the film’s more uniquely Japanese characteristics are a positive attribute.  This is not a film whose appeal should be limited to Japanophiles and manga fans. 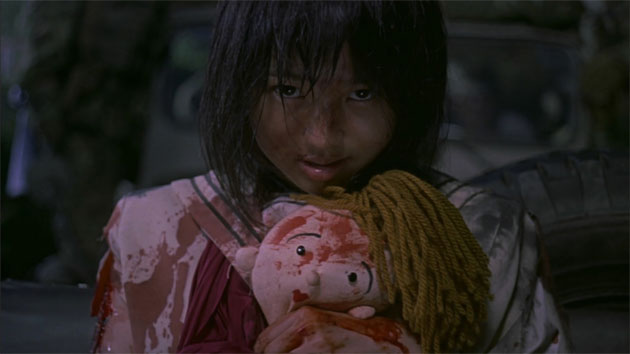 On the other hand, its sequel, directed by Fukusaku’s son after he passed away, is a classic example of a terrible Japanese film which is needlessly weird, stupid and obtuse.  Battle Royale 2 ends with the protagonists advocating Taliban-style terrorism to get their way.  This extraordinary message from a film made in 2003!

But I digress.  The original Battle Royale is a cult horror classic that is imaginative and daring.  It is bloody, full of entertaining antagonists and will keep audiences guessing until the end.  Can Shuya live to the end?  If it comes down to him and Noriko, what will he do?  You’ll have to watch the film to find out.

Summary : A cult classic. Although other films have attempted the same type of concept (most notably The Hunger Games), they've never been done quite like this.