Yesterday it was England vs Argentina, the second of three tests in the Autumn test series. Not sure how close everyone follows English Rugby but its in a bit of a rut at the moment and they really need to simply get better so they can compete against the other major teams. The Southern hemisphere teams are still superior and in the Northern hemisphere Ireland and Wales are clearly the best teams. Not to mention France who beat South Africa on Friday.

Coming off a loss to Australia last weekend, England needed to beat Argentina to show a bit of progress and perhaps even save face for coach Martin Johnson.

So in company with Matt and a few other friends – we paid for our relatively expensive sports ticket and with 78,000 other people headed down to Twickenham to hopefully watch a decent comeback display from England. Thinking about it – English Rugby can still quite easily fill a stadium of 80,000 with tickets priced on average around £50. A day out in Twickenham is still by far my favourite sports day out – the setup, the food stalls, the pubs, the atmosphere, the location….

The weather was horrendous as well – strong winds, sideways rain and it was quite cold – actually I was thinking there was a danger of the game being called off.

So England turn up with their new PURPLE!!! strip. 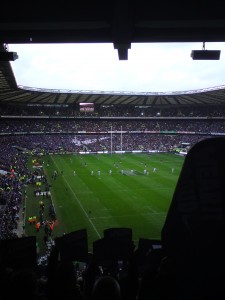 We all got purple cutouts on our seats to hold up so it showed a display of support plus a Nike symbol. Then as the match started the first 20 mins were so boring the biggest cheers came from people throwing these purple cutouts as paper planes and someone literally threw one from the stand and in between the goal posts.

It was 9-9 with ten mins to go when England scored a well worked try but it was more relief than pure joy. The Twickenham crowd had something to cheer about! Great to see England beat the Argies, however, doesn’t build confidence for New Zealand next week. 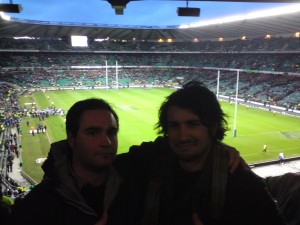 Afterwards – had a few more beers – catching up and had a good time all round. I then headed home with Cindy having dinner waiting!, Matt went to Richmond for a date which was interesting considering it had been a rather boozy afternoon and everyone else had to head back to various parts around London to get home.

So a relatively tame rugby day out in terms of booze however the weather wasn’t helping that cause. Overall though a great day out with good company and will definetly still be heading to Twickenham again because when England do have a better match it will make it just that much more special.