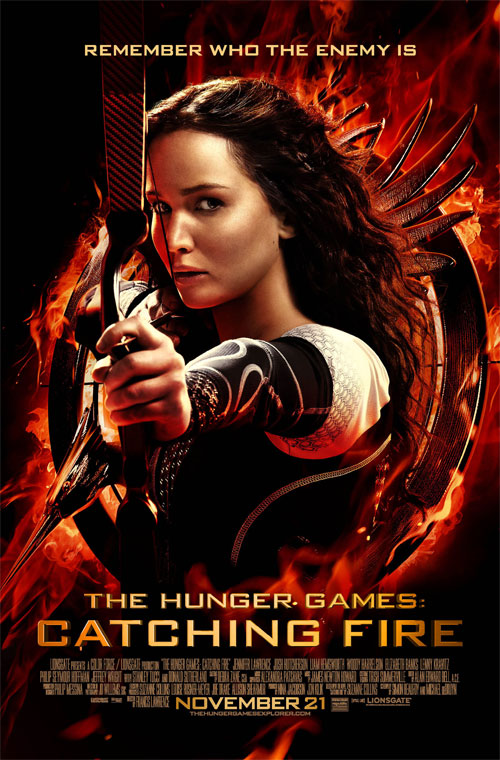 Jennifer Lawrence is back as Katniss Everdeen in Catching Fire, the second installment of The Hunger Games book trilogy and The Hunger Games film quadrilogy (thanks Harry Potter 7 Part 2, what have you started).

After surviving the 74th Hunger Games with her platonic friend Peeta Mellark, Katniss returns home to District 12 which is still a  downtrodden slum.  There she is visited by Panem’s ruler President Snow who is incensed at the rebellious nature of Katniss’ victory which floughted the rules and appeared to inspire rebellion amongst the repressed masses.

Katniss and Peeta embark on a victory tour of the different districts which Snow intends to frame in the media as a portrayal of Katniss having ‘sold out’, so as to break the spirits of people who may have looked to her as a leader for the rebellion.  Unfortunately, Katniss and Peeta’s PR tour has the opposite effect, inspiring spontaneous outbursts of public dissent.  Outraged, Snow ultimately decides he’d like to be rid of Katniss for good.  Enter Philip Seymour Hoffman as the improbably named Plutarch Heavensbee who convinces Snow that the best way to kill her is to enter her in the 75th Hunger Games which they treat like the anniversary editions of Survivor where all the contestants are past winners.

So Katniss once more finds herself with Peeta trapped in a game of death only this time she is against experienced opponents, all past winners of the games, that are faster, smarter and more cunning than the contestants she faced the first time around.

I really liked Catching Fire.  Much more than I expected to.  I appreciated the film’s eye for detail and deliberate pace which takes time to explore the machinations and idiosynchracies of Panem and really indulge in political and cultural satire.  Katniss does everything in her power to remain her own woman but everyone around her seeks to objectify her, use her for political messaging or for television ratings and audience approval.  Her appearance and body language in relation to Peeta is heavily scrutinized by President Snow, Katniss’ companion Effie and by the thousands of admirers who come to see her both on television and in person.  Depending on who you ask and in what context they see her, she could Panem’s Kate Middleton or its Miley Cyrus.

As with the first film, I like that once The Hunger Games establishes the rules of the competition, it plays it straight and explores interesting wrinkles and developments that you would expect to occur with 74 years of competition history to draw upon.  Amongst the contestants for the 75th Hunger Games are an elderly woman who was amongst the earlier winners, a musclebound genetic freak, a couple who happen to be good at hiding and simply outlasting their opponents, and a brother and sister combo who are famous simply by virtue of winning in consecutive years.  It makes for a great mix of contestants and there are many clear parallels to the types of personalities that are typically cast and lionized on reality television.

The Hunger Games might seem to be a megabucks blockbuster production but at times I feel as though it might actually operate on a tighter budget than we think and that director Francis Lawrence is actually quite selective about where his money goes.  In the first film, a lot of the action scenes are purposefully shot in shakey-cam mode where it is difficult to clearly make out what is going on.  In Catching Fire, perhaps in another nod to budgetary restrictions, a good chunk of the action takes place in the dark and unless you’re in an Imax, it can be pretty hard to make out what is going on.  Honestly though, give me darker lighting over shakey cam any day.

The Hunger Games isn’t a hit with teenagers for nothing.  In this second chapter, the love triangle really hits its stride and becomes a focal point of the film.  You might think that a teen mash story might potentially derail the overarching narrative of a repressed people inciting rebellion against their government but believe me, its actually handled rather well and compliments the film quite nicely.  Its as well integrated as Han/Luke/Leia in the original Star Wars trilogy.

The film leaves us on a cliffhanger which I won’t spoil.  In 12 months time we move onto the adaptation of the final book…which has been padded out into two films.  If they can maintain the quality of Catching Fire, I won’t have any complaints.  This is a fine piece of all ages sci-fi escapism.

Summary : A solid successor to the Hunger Games original that explores the Panem lore even further. Lawrence is fantastic in the lead role and the film is bolstered with many talented character actors in the supporting roles.