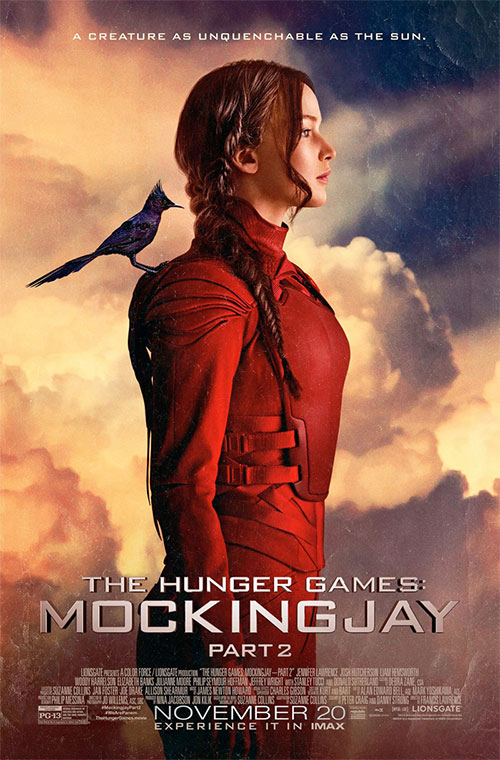 The final act is a predictable but enjoyable chapter in the Hero’s Journey.  When the Hero realizes their full potential and, along with their friends, finally reach and confront the Big Bad.  There’s a huge climactic battle.  Some allies fall along the way. Ultimately, there’s a happy ending and goodness prevails.  Everything about the first two instalments of Suzanne Collins’ The Hunger Games suggested that we should expect the same here.

It was Mockingjay Part 1 that began to deviate from the script.  It was a surprisingly bleak and morbid affair where the light hearted antics of Effie and Haymitch took a back seat to a cautionary and moralistic tale about modern warfare.  The film was less about the heroics of a plucky young woman leading a rebellion against a tyrant and more about the toll taken on innocent bystanders.  There were shots of destroyed medical facilities, drone warfare and the filming of propaganda footage that seems eerily evocative of what we see happening on the news in Syria.  Who expected that in their Hunger Games movie?  Not I.

Mockingjay Part 2 stays the course and leads the film down a path I would not have expected in the slightest.  The rebellion that Katniss joins?  They’re lead by the cunning and Machiavellian Alma Coin who seems indifferent to Katniss’ worth beyond functioning as a propaganda tool to encourage the underclass to take arms against President Snow.  Those two boys that are Katniss’ love interests?  One of them – the vanilla Peeta Mellark – turns into a quivering psychotic who lays their hands on Katniss to literally attempt to throttle the life out of her after they are captured and tortured to the point of having their spirits broken.  The other – the commanding Gale Hawthorne – reveals themselves to be a little bit too American Sniper, whose ‘win the war at any cost’ approach betrays a shocking willingness to inflict civilian causalities as a war strategy.

There’s a final battle at the entrance to The Capitol.  But its not like the final showdown at Hogwarts or the battle on the second Death Star.  Like Mockingjay Part 1, its less about good guys and bad guys exchanging gun fire, but more shades of modern combat, where people are killed seemingly at random by IEDs, trip mines and armed drones.  The Peacekeepers, the armed forces of President Snow, seem to be the least of anyone’s problems.

All throughout Mockingjay – Part 2, Katniss is driven by revenge and a desire to kill President Snow.  But the jokes on her because he is already on death’s door, terminally ill and coughing up blood.  Alma Coin wants to film footage of Katniss advancing on The Capital to boost the morale of the troops and perhaps frame the expectations of the audience who would expect her to do something similar.  But The Capital has already fallen and President Snow has already lost.  The film doesn’t even show the fall of The Capital.  We see the conflict from Katniss’ viewpoint and the last thing she sees is the carpet bombing of innocent children that also claims the life of her sister Prim.  When she wakes up, the war is already over. 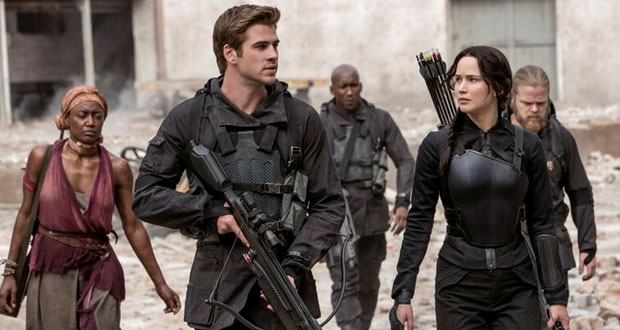 By this point, I felt I had the rug well and truly pulled out from beneath me.  Where was this story going?  It doesn’t take long to find out.  During a council meeting, Alma Coin invokes a new Hunger Games to sate the bloodlust of the people in the Districts who are eager to gain a measure of revenge on the former citizens of the Capital.  The Hunger Games isn’t a retelling of Star Wars.  It’s a modern day Animal Farm and Coin is its Napoleon.

The penultimate scene is set in an arena where Katniss is tasked with being the public executor of President Snow in front of Alma Coin and the new citizens of The Capital.  As she draws her bow upon a dying President Snow, Katniss attempts to end the cycle of violence with one final bloody act.

The film’s denouement gives audiences cause for muted celebration.  Katniss lives in exile on the farmlands of her home district.  She suffers PTSD and weeps at the sight of anything that conjures memories of her sister.  She has a family with Peeta who himself has never fully recovered from the torture inflicted upon him.  There’s a tender but melancholic moment that Katniss and Peeta share on their bed where Peeta seeks reassurance from Katniss that her love for him is real.  He’s not asking this playfully, but because his mind is shattered and he needs reassurance.  He is a broken man and you get the feeling that Katniss is probably all that holds him together.

As the end credits rolled and I digested what I just witnessed, I had several thoughts.  Firstly, surprise at the direction the film took.  Secondly, I admired the enterprise that Collins had and the producers of this film for having the brass balls to take the story down such a dark and twisted path.  Lastly, I wondered what everyone else thought.  The film reviewed well enough, sitting at a respectable 71% on Rotten Tomatoes at time of writing.  But unlike The Return of the King or The Deathly Hallows, the takings at the box office are down compared to the previous entries in the series.  I can understand that.  It’s certainly not for everybody.

I wonder what the lasting legacy of The Hunger Games will be.  It has made a star out of Jennifer Lawrence.  It appears to have opened the door to leading roles for women in fantasy epics with Divergent and the new Star Wars films being the notable beneficiaries (a welcome trend given the absolute sausage factory that is Marvel super hero films).  I expect that the series will be looked back upon quite favourably.  It has a fantastic lead performance from Lawrence, peerless production design and an interesting and unconventional narrative.  Having never read the books, I had no idea what to expect when I saw the first film in the series three years ago.  All things considered, I’m pretty happy with what we got.

Summary : An unexpectedly dark and challenging final act in The Hunger Games series. I enjoyed it nonetheless. 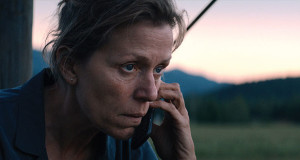