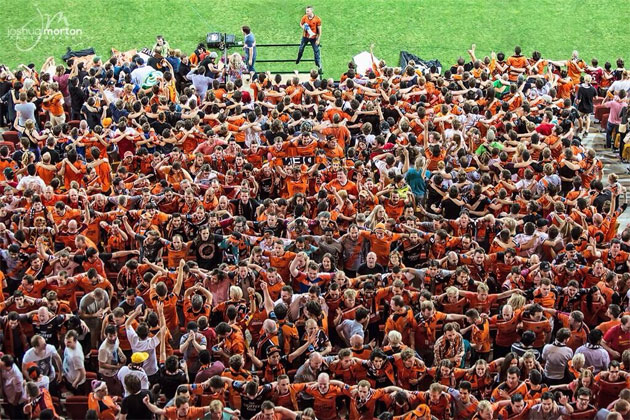 Round Seven Round Up

Round Seven was a goal-fest in the A-League with 17 netted across 5 fixtures, making this the highest scoring round of the season to date.

It’s already looking like a long way back for the bottom three clubs in the competition with a gap opening up between Perth Glory and the foot of the ladder.  I feel for Adelaide and Wellington.  I don’t think either team have been that bad.  Wellington in particular have been desperately unlucky and improbably don’t have a single win against their name this season having conceded injury time goals twice this season.  The squad seems halfway decent, they have a great striker in Brockie and a fine coach in Ernie Merrick.  Surely their luck has to change soon?

Melbourne Heart on the other hand are playing some absolutely miserable football and even in their patchy periods of territorial dominance they seem unable to put away any goals.  It seems like they’ve invested in a dud striker in Mifsud.  Depressingly, there are now individual players in the other squads who have now scored more goals than all of the Heart’s goals this season combined.  I don’t really know what getting rid of coach John Aloisi would do at this stage though.  The squad is already signed and locked in.  How much more could another manager get out of the squad?  Surely the fans must be disappointed in how marquee signing Harry Kewell has turned out.  He has played a whopping two matches, seemingly has a new injury every week and has missed attending the Roar game to go golfing.  Huh.

How the hell are Sydney FC and Newcastle Jets so high up the ladder?  Both clubs have won 3 games in a row and are now just a win away from the top of the table.  But I believe both clubs are massively punching above their weight.  I expect Melbourne Victory, Central Coast Mariners and even Perth Glory should catch up to them and restore the natural order.

This has been a season to forget for marquee players.  Kewell, Heskey, Ono and Del Piero have all been injured and missed several weeks of football.  Instead, a lot of the excitement is on young Australian players who, thanks to a change in Soccerroos coach, have been thrown a lifeline to potentially represent their national squad.  The talk each week this season is centered around Tommy Juric, Ivan Franjic, Adam Taggart, Kwame Yeboah and James Troisi.  Thats fine by me.

A historic top of the table clash on Friday night saw Brisbane Roar finally beat the Western Sydney Wanderers, their first win against the club in five attempts.  It’s a credit to the Wanderer’s ridiculously impressive first season that this is also the first time a club has put three goals past them and its also the first time WSW conceded a goal in the first twenty minutes.

The game was a fantastic advertisement for the game.  The teams were split on possession.  Over 15 shots on goal from both teams.  Four excellent goals.

Besart Berisha returned after missing four rounds and he played like a man possessed.  He fired a warning shot across the bows in the first minute of the game and after a determined run in the fourth minute, he nutmegged Topor-Stanley and put one past Ante Covic on the second attempt.  Ten minutes later, Socceroos hopeful Ivan Franjic scored a pearler from the edge of the penalty area.

If the Roar have had a consistent point of weakness this season, its been their defensive lapses.  They’ve conceded a miserly four goals this season but concerningly, they have all come from shocking defensive turnovers or goalkeeping howlers as opposed to a normal goal scored in the general run of play.  This week it was Jade North handing over possession just outside his penalty area which gifted Brendan Santilab his first goal for the Wanderers.

Western Sydney had the run of play in the second half but couldn’t find the equalizer.  Then, in injury time, young Kwame Yeboah struck again as he came off the bench and fired home another belter of a goal to send the Roar back to the top of the table.

An absolutely fantastic game on a fantastic day.  The signs are extremely promising for the Roar this season.