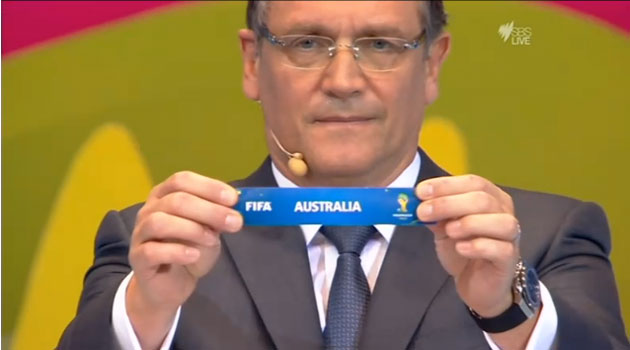 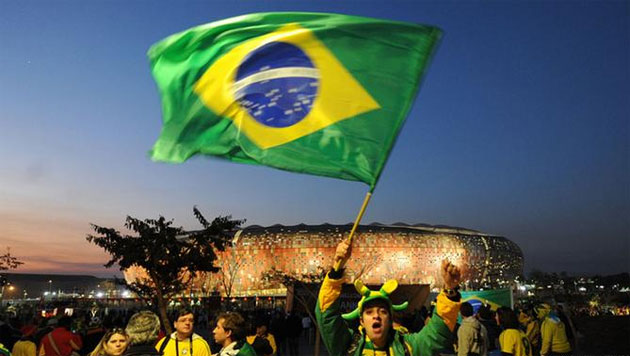 The draw for the Group Stage of the World Cup was held on the weekend.  Prior to Saturday, it was hoped that the Socceroos would get a favourable group, to ease our chances of qualifying through to the knockout stages.  Perhaps an Iran or Honduras.  Why not Costa Rica or even an out of form Mexico?  Here’s what we got:

It was pretty much one of the most stupidly difficult groups that we could have drawn.

That initial horror and pessimism has soon turned into a cheerful optimism though.  In Australia’s national psyche, they love being the underdog and if you’re going to be playing on the biggest sporting stage of them all, why not play against one of the tournament favourites and defending champions of the competition?  All it means is a chance to make history.  No one expects you to win.  You have everything to gain and nothing to lose.

At this point, I have nothing but great envy for my friend Rich who’s booked his tickets and will be in Brazil for all three Socceroos games.  It will be an amazing once in a lifetime experience.  I wish I had the foresight to plan and save for something like that.  Pity the next two World Cups after Brazil are in such lousy locations

A League Of Their Own

Meanwhile, our domestic competition has settled into a bit of holding pattern.  Its the same that it has been since the start of the season.  The bottom three clubs – Adelaide United, Wellington Phoenix and Melbourne Heart – all seem incapable of winning despite putting in plucky and desperate performances week in, week out.  In Round Ten, all three of those teams had the lead in their games and all three were unable to hold them.  It’s only early in the competition but there is already a yawning gap between these clubs and the rest of the pack.  Every week they seem like they’re finally on the cusp of breaking their duck and then something desperately unlucky happens and they seem to lose their bottle.

Brisbane Roar had a slow start to their game against Adelaide, conceding the lead after just five minutes with Osama Malik heading home unchallenged off a corner.  The Roar proceeded to play an uncharacteristically poor game, one of their worst this season but thanks to a unnecessary penalty conceded by Tarik Elric on Corey Brown and a ridiculously scrappy second half goal from Besart Berisha (he was on the floor when he prodded the ball in), the Roar went away with all three points.

Coach Mike Mulvey described it as ‘winning ugly’ and thats exactly what it was.  It’s generally a positive sign for your team though when you can play like total rubbish and still claim 3 points on the road.  Both Sydney teams failed to win this round which opens up a five point gap at the top of the table.  This makes me much less stressed when I watch my team.

Next week the Roar travel to Wellington.  Part of me would be completely happy for the Nix to get the win.  Those poor dudes have come so close this season and don’t have a single W against their name.  I wouldn’t begrudge them one this Saturday.

Previous: Ryse: Son of Rome
Next: The Legend of Zelda: A Link Between Worlds