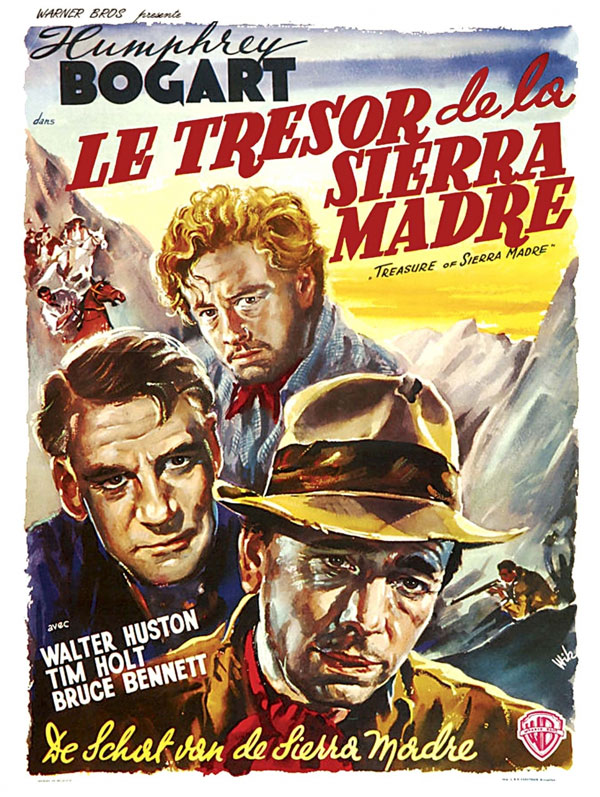 Who invented the narrative trope of gold-digging prospectors going out to a mountain range, striking it rich and then gradually turning on one another as trust begins to crumble and paranoia sets in?

I’m not enough of a literature or cinema buff to know the answer but surely John Huston’s The Treasure of the Sierra Madre is one of the best adaptations of that tale.  Even in its day, it was immediately recognized for its quality (Jack Warner referred to it as the finest film his studio had made) and its notable for a wonderful performance from Humphrey Bogart where he is the antithesis of the cool, unflappable protagonist that he usually plays.

Bogart plays Fred C. Dobbs, a down on his luck laborer who toils for a fortnight with his buddy Bob Curtin, only to have the foreman McCormick run out on them and cheat them of their wages.  They eventually track him down at a bar and beat him senseless.  It’s a small measure of revenge but they feel exhausted and are penniless for all their efforts.  Both decide that working as a tradesman in the West is for rubes.

Dobbs and Curtin meet an eccentric old prospector named Howard who tells of riches that can be found by mining for gold in the mountain range.  Dobbs and Curtin are intrigued but also a little dubious of his claims.  If its so easy, why isn’t Howard a made man?  Howard warns them that gold has the power to corrupt (“I’ve seen what gold can do to a man’s soul”) and that fortunes can come and go quickly.  Dobbs assures Howard he is a trustworthy man and that he only wants his fair share.  Enough money to settle down, live a comfortable life.

The trio decide to make for the mountains the next day and after a couple of days of digging, they hit the payload.  As anyone familiar with the story would understand, finding the gold is only half the battle.  Soon, a myriad of complications set in that make life difficult for Dobbs, Curtin and Howard.  There are Mexican bandits on the prowl, armed to the teeth and trigger happy enough to murder and steal from any poor souls they come across.  An unwanted fourth prospector turns up and demands a quarter of the profits.  Gradually, Dobbs becomes suspicious of the old man Howard.  Can he really be trusted not to make for the hills with the entire yield? 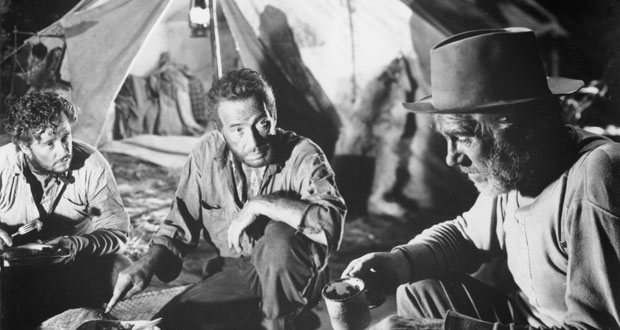 I liked The Treasure of the Sierra Madre.  I liked it a lot.  There is a lot of good stuff to absorb in this scrappy and dirty morality tale that enjoys tormenting its characters and pushing them to their limits.  There are a lot of comedic high notes in the film – not necessarily gags with punchlines but moments where the humour is derived from the irony of how a situation plays out.  One of the few good-natured men in this film is killed trying to protect the trio who intend to kill him out of convenience.

Dobbs, Curtin and Howard really make the film.  Bogart’s performance as Dobbs is unashamedly scummy and non-glamorous.  He spends most of the film caked in dust, physically bested by the old man and he has the weakest morals and convicitions in the company.  As paranoia takes a hold of Dobbs, Bogart turns in an enourmously entertaining performance of a man slowly losing his mind and his soul.

Howard, played by John Huston’s dad Walter, plays an energetic mountain-goat of a man who defies his age by clambering over rocks with ease and dancing a ho-down when they strike gold.  He has terrifically distinct accent and has a wonderful turn of phrase as shares stories and imparts wisdom about surviving the many hazards of the mountain range.  For a good chunk of the film, the audience will likely not be sure what to make of him.  Is he trustworthy?  Is he what he seems?

Curtin is the straight man who is often forced to play the peacemaker between Dobbs and Howard.  The part is played by Tim Holt, an actor who I am not familiar with, but who I came away greatly impressed with.  His role doesn’t require him to be as loud and screen-dominating as Bogart and Howard but he makes a believable and likable Voice of Reason.

The Treasure of the Sierra Madre is a film that has some great scenes of tension and paranoia but it is also interspersed with a lot of action beats.  Some of these scenes are a little jarring tonally as they feature some Mexican bandits who are straight out of the Speedy Gonzales School of Racial Caricatures and Cartoonish Stereotypes.  “Badges?  We don’t need no stinkin’ badges!”  is the famous line uttered by one of the banditos trying to trick Dobbs into believing he is an officer of the law.

It’s certainly not enough to spoil the film but virtually every scene involving the Mexicans is ludicrous.  When the banditos attempt to storm a steam engine train, the white Americans inside whip out their guns and shoot them two at a time.  Not unlike the exchange between Legolas and Gimli in Lord of the Rings, the passengers compare kill counts and high five when they successfully shoot a guy in the head.  Later on, there’s a scene where Howard visits a Mexican village and treats a sick young boy until his healthy returns.  He gets the royal treatment that you see in Looney Tunes cartoons where you are fanned by a giant palm leaf and beautiful girls feed you fruit, wine and roast chicken.  It’s kind of ridiculous.

That aside, the rest of the film is pure gold (pun intended).  I’m always impressed when I see a film as old as this that isn’t shy about having a cast almost entirely populated by con-artists, miscreants and double crossers.  The twists and turns in this film come in thick and fast and although everyone more or less understands how the ending will play out, its an entertaining journey watching Humphrey Bogart gradually spiral out of control and descend into madness.

We don’t need no stinkin’ badges!

Summary : John Huston's film about desperate prospectors who succumb to greed and paranoia is an entertaining Warner Bros. classic.

Tagged with: Humphrey Bogart John Huston The Treasure of the Sierra Madre