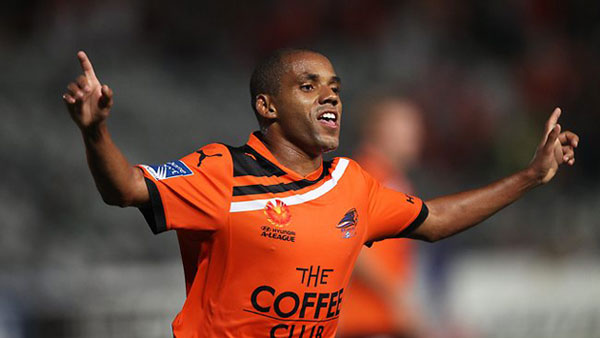 Nearly two years ago, I started blogging about the Brisbane Roar in the twelfth round of the 2010/11 season when they were on a surprising run of eight undefeated games and were sitting second in the table.  That run continued unbeaten for the rest of the season and concluded in a memorable Grand Final where they won their maiden championship.  On Sunday, after playing their 29th A-League game of the season, the Roar soundly defeated their rivals Central Coast Mariners and secured a back-to-back Grand Final in Brisbane.  I could not be happier.  This season has definitely had its share of ups and downs (both for the Roar and the league) but Sunday saw the Roar playing their very best and regardless of the result, I’m happy that the club has managed to make the final once more.  We have recovered from a bad patch of form in the middle of the season in emphatic fashion, having beaten every side in the Top Six away from home in the last nine games.  April 22nd cannot come around soon enough.

Commiserations go out to Wellington Phoenix, my brother’s team.  They briefly held a 2-1 lead at AAMI Park before succumbing 3-2 in Extra Time to Perth Glory.  They played bravely and had a great season when few pundits gave them a chance in the pre-season.  Sadly, it was the last game for Phoenix talisman Tim Brown who retired from professional football at the end of the season.

This tumultuous season took two, maybe three twists today when Nathan Tinkler, owner of the Newcastle Jets suddenly made a public announcement that he would like to ‘return’ his A-League license, get a refund and ditch the ownership of his club.  Tensions had been brewing between Tinkler and FFA chairman Ben Buckley had been brewing since Clive Palmer made public the fee he paid to get an A-League license which was several hundred thousand dollars cheaper than what Tinkler paid.

Buckley rejected Tinkler’s request to hand in his A-League license and threatened legal action if he pursued the matter further.  Not only that, since the FFA is run like the mafia and Tinkler crossed people he shouldn’t have, it looks like someone is about to spill some dirt on Tinkler’s financial dealings.  There was this ominous retweet from Fox Football pundit Adam Peacock earlier this evening:

Regardless of what happens, there’s no doubt that the A-League at the moment is an absolute shambles.  In what should be the week to celebrate some fantastic onfield action in the finals, we are looking at another week where off-field dramas have overshadowed events.  Gold Coast United are dead.  West Sydney club ‘Sydney Olympic’ are being rushed out the door to be ready for next season.  Central Coast Mariners have financial problems and couldn’t get 10,000 supporters to their home semi final.  Newcastle are now possibly dead with player Ryan Griffiths telling reporters that the players have been told to look for work elsewhere.  The two biggest clubs in the competition Sydney FC and Melbourne Victory don’t have managers but are signing and firing players left and right.

At what stage will this insane mismanagement catch up to the FFA?  So far, Ben Buckley is doubling down and doesn’t appear to be going anywhere.  Yet confidence in the future of Australian domestic football is as low as it has been since the inception of the A-League.

These are troubled times.

On a side note, Tinkler attempting to return his football club like it was a record player he bought at Harvey Norman reminded me of this classic Monty Python sketch: