Don't Miss
Home > Video Games > The Legend of Zelda: A Link Between Worlds

The Legend of Zelda: A Link Between Worlds

Reviewed on the Nintendo 3DS.

It’s as if the Wii, Brain Training, Nintendogs and the shift towards casual gamers never happened.

The Legend of Zelda: A Link Between Worlds is a spiritual successor to the classic 1992 Super Nintendo game A Link To The Past.  It’s a startlingly stripped down, tutorial-free, old school top-down Legend of Zelda game where the game design has an implicit trust in the player being familiar with how the franchise works.  In five minutes, it tosses the player out into an open environment, gives them free reign on where to go and lets the player simply explore at their leisure.

It’s an extraordinary backflip from Nintendo’s design brief of the last seven years and suggests they may well be looking to reach out to hobbyist gamers after the casual market deserted them in droves for smart phone gaming.  Even as recently as Skyward Sword in 2011, that focus on welcoming unfamiliar new players was there with the existence of a permanent, unskippable message that explained how rupees were valued and what the low health warning meant – every single time it happened in the game.  The last few adventures for Link had also been quite experimental with touch screen and gesture based control schemes, avenues explored to make the game more accessible to the masses.  A Link Between Worlds is the first Zelda game out of the past four iterations where you swing a sword by pressing a button. 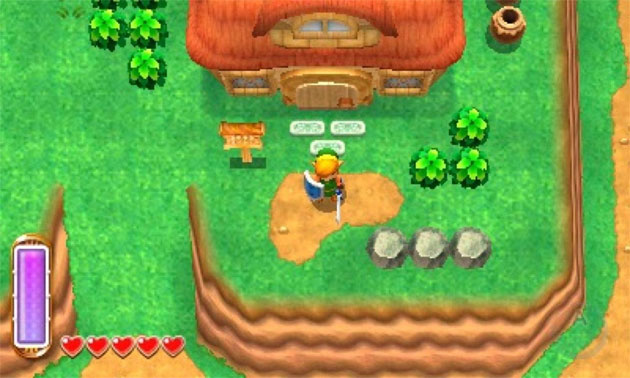 A Link Between Worlds is set in the same Hyrule as A Link To The Past, only its set a hundred years later and the Light World / Dark World mechanic is replaced with Hyrule / Lorule.  Lorule is sort of like a Bizarro version of Hyrule that is overseen by the raven haired Princess Hilda.  At the start of the game she calls to Link for help as her kingdom is under attack from the mysterious art-loving sorcerer Yuga.

Not including the side quests and collectathons, the main story mode in A Link Between Worlds takes roughly 16 hours to complete and it is pure gaming bliss.  I didn’t know this Nintendo still existed.  When they are on their game, there really are few other designers that can match the company for their creativity, talent and flair in crafting dungeons for the player to explore and solve.  There are over ten in A Link Between Worlds and they are each distinctive in appearance and varied in structure.  Some have a central hub.  Others exist as a tower several stories tall.  Some dungeon puzzles involve light and dark.  Others dabble with water and ice.  Lava and rock.  All of the puzzles incorporate the signature new ability for Link – he can now shift into a 2D plane and traverse the very walls of the dungeons.  It’s impossible to appreciate how novel this feature is until you play the game firsthand.  It really does open the door creatively for a whole slew of new tricks for the designers to test you with.

As the game is set in the same world as 1992’s A Link To The Past, veterans of that game will enjoying revisiting famous landmarks and seeing their contemporary redesign.  What happened to the flute playing kid in the woods?  Is the old guy under the bridge still there?  What about Zora who hands you the flippers.  A lot of the bosses are redesigns of classics from LTTP only they now incorporate a new twist to make them slightly more challenging.  The game does have a few new ideas of its own.  One of the most talked about concepts is the removal of dungeon specific items for Link to discover.  Instead these are all made available to the player at the start of the game via a hooded chap named Rovio who sets up shop in your home and gives you the option of renting or buying items.  It appears to be a design choice made to give the player complete unfettered accessibility at the start of the game as to the order in which they tackle the dungeons.  It’s a welcome freedom that I’d happily see return in future games. 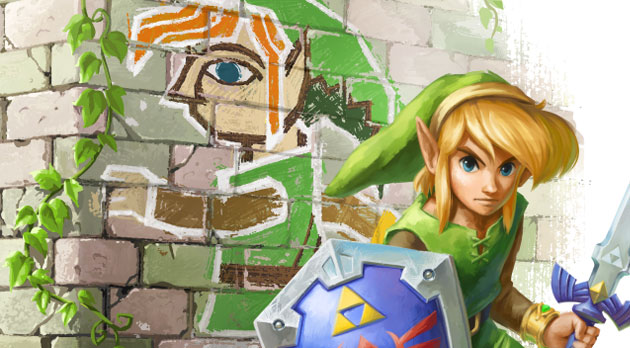 It’s a great achievement for Nintendo to make a new game that invites direct comparison to a game held in as high a regard as A Link To The Past and still come out smelling like roses.  What’s even more pleasing is that they’ve done it whilst subtly incorporating contemporary design features which other contemporary Zeldas have annoyingly lacked.  There is a greatly improved fast-travel feature in A Link Between Worlds (which sort of loosely exists in LTTP) that is made available from the outset.  The nature of the 3DS means you can simply close and lid and resume play whenever you like.  The game also incorporates the 3DS Streetpass function so you can play against other players in your game world.  And as of last night, the game also now has the ability to capture a screenshot whenever you like and is fully compatible with MiiVerse.  These are all useful modern design elements that incorporate social media, quicksave and fast travel options which are obviously absent from the Super Nintendo classic.

I never begrudged Nintendo chasing the casual market with the Wii.  After the middling success of the Gamecube they’d have been mad not to chase the market once they got their hands on it.  I’m sad to see the challenges facing the sales of their hardware today, particularly on the Wii U.  Having said that, the Super Nintendo and specifically Super Mario World and The Legend of Zelda: A Link To The Past were the two games that made me a lifelong fan of the medium.  So selfishly, there is a rather incredible silver lining to Nintendo’s recent woes.  If their recourse for losing the casual market is to output more games that have the spirit and design of their best work in the Nineties…well then.  There aren’t that many of us left playing these games on 3DS and Wii U.  But for those that do, we’ll be loving every second of it.

The Legend of Zelda: A Link Between Worlds

All in all, you’re just another link in the wall

Summary : The best 2D Zelda game in years and a worthy successor to A Link To The Past. An instant classic.

Previous: A-League 2013/14 – Round 9 – Who Knows, We Might Draw With Chile
Next: Phoenix Wright: Ace Attorney – Dual Destinies