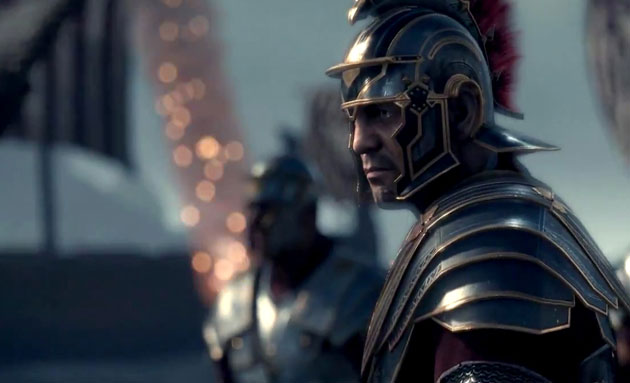 What makes a good launch game?  It goes without saying that it should be fun to play but over and above that, you want to feel vindicated in the purchase of your shiny new (expensive) hardware.  The best launch games effectively showcase the features of the new system and give you an idea of whats to come.  Super Mario World, Tekken, Mario 64, Halo, Oblivion, Wii Sports.  These are some of the great games that helped launch a system.

Crytek’s Ryse: Son of Rome originally started out as a showcase game for the Kinect on Xbox 360.  It has since been delayed and rebuilt from the ground up as a gory Roman hack n’ slash lauch title for the Xbox One.  Players take the role of Marius, a promising and accomplished legionnaire who returns to Rome after fighting a campaign abroad, only to witness the brutal murder of his family at the start of a Barbarian invasion on the capital.

Maruis swears revenge on those responsible for his family’s death and he embarks on a cross-country campaign as a relentless killing machine, impaling and severing the flesh of hundreds of hapless insurgents as he seeks answers.  Eventually, he uncovers a conspiracy that seems to run all the way to the highest authority in the Roman empire.

Ryse did not get particularly charitable treatment from the enthusiast press in the lead up to the Xbox One release.  It was flagged as the poorest of the launch titles and identified as having repetitive and shallow gameplay.  Having played the game through to its completion and dabbled a bit in the multiplayer arena modes, I feel as though this game has been dealt a needlessly harsh hand. 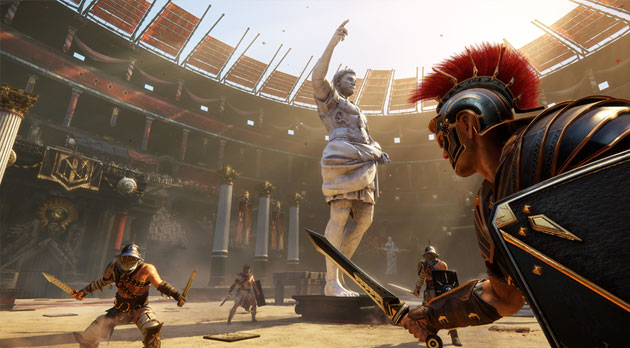 Combat is the heart and soul of Ryse.  This is a game with very little trimmings.  There is no exploration of the Roman capital, no strategizing with fellow centurions before the battlefield and no delicate conversations navigating treacherous Roman politics.  Marius is made for fighting and thats just about all he does.  Occasionally, he will be called upon to lead a squadron of fellow soliders but most of this game is about how you stick the pointy end of your sword into the eyesocket of the guy standing across from you.

The mechanics of the combat are similar to the Batman Arkham series where there is an emphasis placed on timing your strikes so that you can chain them together to fill a combo meter.  Although you will almost always face multiple enemies, they come from the Steven Segal Bad Guy school of fighting where they very kindly stand around in a circle and take turns to attack you one at a time.

Once you get the hang of things, you will be ‘rewarded’ for your finesse in combat with increasingly brutal executions.  Fill your combo meter to capacity and you unlock a bullet time mode where you run around and punt people with a giant boot to the mush that Gerard Butler would be proud of.  For a game that is largely grounded in realistic looking combat, this Bullet Time Boot comically sends the enemy flying backwards about ten or twenty metres.  It is comedy gold.

Booting people in the face and mutilating barbarian hordes is good, simple fun.  It works because the graphics are absolutely gorgeous and the game is so short it doesn’t get a chance to overstay its welcome.  Even a button masher such as myself clocked the game in roughly eight hours.  It has to be said, the setting really helps the game shine.  Everyone loves a good Roman epic and the video game industry has been surprisingly conservative in tapping that market.

This game really captured my imagination and made me want to see a fully realized Roman action adventure game with more development time and broader scope in the design brief.  Although Ryse looks incredibly polished, it shoots the whole experience from close up so we never get to soak in a full scale war or lose ourselves in the streets of Rome.  It’s the same sort of way HBO covers big cities and wars in Game of Thrones.  I understand in the case of Ryse, its because its a launch game that has to meet a deadline but all its succeeded in doing is whet my appetite for more.

Who knows?  Maybe Crytek themselves are up for it?  I believe a sequel to Ryse is all but confirmed.  It’s my hope that that game is less God of War and more open world GTA with swords and sandals.  Just imagine.

That’s enough talk about the game that I want Ryse to be.  The game that we did get is still entertaining, popcorn fun and is a perfect showcase to curious friends and onlookers as to what your shiny new hardware can do.

What we do in life, echoes in Xbox

Summary : A fun graphical showcase for the Xbox One launch.

Tagged with: Crytek Ryse Ryse: Son of Rome Xbox One