Don't Miss
Home > Video Games > The Last Of Us: Left Behind

Remember Naughty Dog?  Who could forget!  They made, in my opinion, one of the greatest games of last gen.  They’re back with Left Behind, a single player expansion released on Valentines Day that further explores the characters from The Last Of Us. 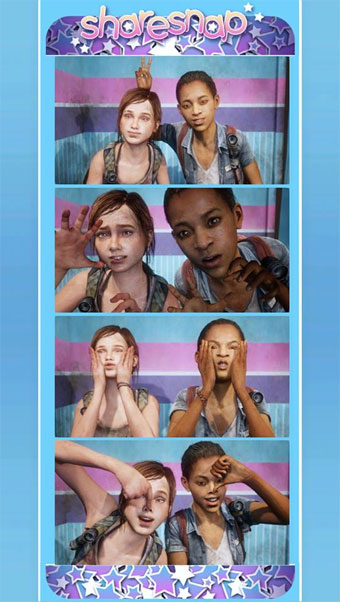 Players take control of Ellie as she weaves between two narratives – one where she looks after a mortally wounded Joel and another in which she becomes re-acquainted with another teenage survivor named Riley.

If there was ever any doubt over Naughty Dog’s mastery of video game story telling, Left Behind shows the company at their creative best, requiring only a scant three hours to tell a memorable and tender teenage love story in the most unlikely of circumstances.

The scenes with Ellie and Riley are an exercise in showing the way forward for non-violent interactivity in gaming.  Without wholeheartedly resorting to cut scenes, Naughty Dog are able to explore the relationship between Ellie and Riley by employing a number of clever scenarios – exploring a Halloween store, using their imaginations to play an arcade game, reading a joke book, using a photo booth etc – and they showed their willingness to steer clear of unnecessary padding.  A lesser developer would almost certainly have included some stealth sequences where the girls hide from the infected or some such nonsense.

Speaking of game play, Naughty Dog has actually added a few new wrinkles to combat sequences where Ellie is retrieving medicine for Joel.  I spotted a couple of new animations that weren’t in the original game and there are a couple of set pieces where its possible to pit the infected against the humans.  A well placed toss of a brick can set the cat amongst the pigeons and you can pick off any remaining survivors from the fringes of the firefight.  I found it to be a rather enjoyable new take on The Last Of Us formula and in general found the combat to be tense, well paced and delivered with just the right balance to compliment the Ellie/Riley narrative.

In accomplishing so much in such little time, Left Behind feels a bit like one of those short stories that Pixar screen before their feature length films.  It shows how much Naughty Dog gets the medium and how much they can push it forward.  Before Left Behind, I felt that The Last Of Us was perfect as it was.  I loved it but felt no sequel was necessary.  Left Behind makes me much more open to the idea of revisiting those characters and that world in a new installment.  It’s because Left Behind is the perfect companion piece to The Last Of Us.  It enriches the original story, gives us new perspective on Ellie’s experience and leaves you wanting more.  With the rave reviews that both games have had, surely it is only a matter of time before Naughty Dog indulges us?

Note:  The timing of this game’s release and the announcement made by a certain look-a-like celebrity will go down as one of the weirdest coincidences in video game folk lore.

Summary : The perfect companion piece to The Last Of Us and one of the most unexpectedly touching and affecting narratives of the year.

Tagged with: Left Behind Naughty Dog Playstation 3 The Last Of Us

Previous: Twelve Years A Slave
Next: The Sights, Sounds and Tastes of Singapore and Malaysia