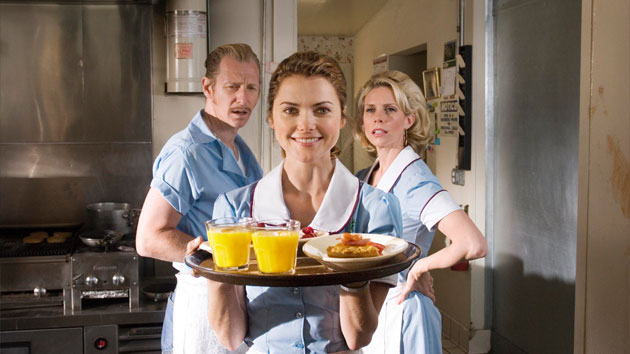 To put it bluntly, I first heard of this film and became interested in seeing it because Adrienne Shelly is dead.  More specifically, because knowledge of her death prior to seeing this film strongly affects your view of it.  How does she have this power over us from beyond the grave?  Is Waitress even a good film?  I finally got a chance to watch it and find out what all the fuss was about.

Waitress is the story of an unhappy pie-making waitress named Jenna, played by Keri Russell, who is in a miserable marriage and dreams of leaving her husband Earl to start her own pie store.  Things get complicated though when she has an unplanned pregnancy and then takes a turn further still when she becomes romantically involved with her doctor, played by Nathan Fillion.

There is plenty of good in this film and it lies mostly with the two leads, Russell and Fillion, who are both excellent and manage to pull off being relatable and engaging characters despite the circumstances of their relationship.  Shelly herself has an acting role as one of Jenna’s friends at work who is more accepting of her quiet and boring life.

I could appreciate, by the time the credits rolled, where the awkwardness comes from when it comes to critics reviewing this film.  Waitress is prone to the occasional lapse into indy film making kookiness for the sake of it.  Especially when it comes to walking deus ex machina character ‘Old Joe’, a regular at Jenna’s diner who is a pretty goddamn ridiculous character to begin with, but is ultimately there to provide the unlikely resolution to the film.

The main contention I suspect a lot of people will have with this film though, is how pessimistic its tone is.  Although there is some sweetness towards the end of the film, Waitress is largely focused on miserable people stuck living miserable lives.  Even though one character escapes from that existence at the end of the film, it comes from a moment of serendipity rather than control over their own fate.  The fact that Adrienne Shelly has written, directed and acted in this film suggests that this is a very personal work and you wonder if the words spoken in the narration by Jenna to her unborn baby mirror the thoughts of Shelly herself.  In which case, she comes off with a very bleak view of the world.  At one stage, Jenna considers selling her unborn baby and says she doesn’t want to bring it into a messed up world full of hatred and violence.

Shelly seems to have a harsher view of the world than most but there is absolutely no way anyone came really dispute her perspective without incredible awkwardness and restraint since she ended up getting murdered by a man who said he killed her because ‘he was having a bad day’.

So there you have it.  Waitress is a good, though not great film, but morbidly, it becomes more interesting to watch when you have the background behind both the film maker and the weird critical response and notoriety the film has had since its screening at the Sundance Film Festival.  Sadly, Shelly did not survive to even find out it had gained acceptance to be shown at the festival.