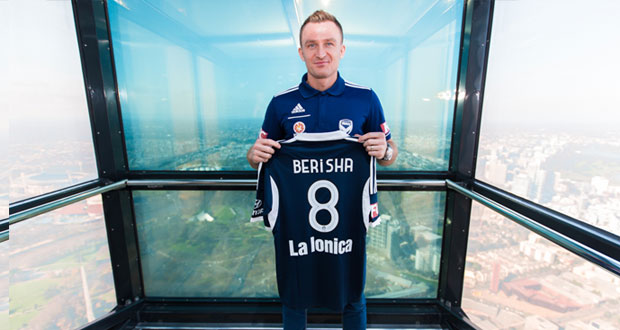 The tenth season of the Hyundai A-League is almost upon us!  After another interminably long off season, Australia’s premiere national football competition begins anew with Melbourne Victory hosting Western Sydney Wanderers at Etihad Stadium.

How did I go with my picks from last year?  Here’s what I said would happen:

Life after Besart Berisha begins now.  The firey Albanian striker has been the X-factor for the Roar since he joined the club three years ago and a significant contributor to their title wins in 2012 and 2014.  He scored 48 goals in 76 appearances including 3 goals across two grand finals.  Now he has headed south to Melbourne Victory.  Where does that leave Brisbane?

By my reckoning, I think there’s still plenty of reasons to be optimistic about the season ahead.  The club lost Berisha and Socceroo Ivan Franjic but they have otherwise kept the nucleus of their championship winning team, securing the long term contracts for Luke Bratten and Dimi Petratos in the off-season.  Coach Mike Mulvey had to go shopping for a striker in the off-season and although he said he wasn’t looking for ‘another Berisha’, he’s certainly invited comparisons by signing another unknown Albanian in Mensur Kurtishi.

The Roar played extremely well without Berisha last season and in fact two of their biggest wins (5-2 vs Sydney, 4-0 vs Sydney) came when the club were playing without him.  Having said that, Berisha has been good for roughly 15 goals per season for the last three years so the club will need to find those elsewhere and it will be up to Solozarno, Kurtishi and Henrique to step up and deliver the goods.

There are concerns that tactically, the Roar haven’t been clicking as well as they would have liked in the pre-season, as they lost 3 out of 4 games against A-League opposition.  Just two weeks prior to the start of the season the club held a meeting of the senior players to iron out the kinks and go back to the drawing board.  Pre-season isn’t everything (just ask Manchester United) but the Roar haven’t enjoyed the fluency of last season’s pre-season where they were scoring for fun and looking like a tight knit unit.

Last year it took Josep Gombau ten rounds for his brand of tikki-takka Spanish football to gel at Hindmarsh stadium.  By then, their rivals had gotten too far ahead of the pack and the Reds only just managed to scrape into finals contention.  This season, you’d expect a much smoother journey for the Reds.  They’ve looked pretty good in the pre-season and youngster Awer Mabil remains an exciting prospect.  Squad depth is probably one of the biggest concerns for Gombau.  In short, I don’t think they have any.

Mostly, I’m just looking forward to more of Gombau and his whacky antics.  Last season he told a local news reporter that his son was a ‘shitty goalkeeper’ and endeared himself to the Reds faithful by celebrating goals running up the touch line in his suit with his gut hanging out.

The most consistent club in the competition, Central Coast Mariners have never failed to make the finals and despite every season having their talent raided by other clubs, they always manage to stay competitive and loom as dark horse title contenders.  This year, without Graham Arnold, without their championship winning veterans, without Wee Mac and after suffering a tumultuous off season where they struggled to raise the funds to use Blue Tongue Stadium, I believe they will finally be on the decline.  There’s still a handful of talented players at the club but no other team has lost as many talented players at the Mariners did this year.  I know we say that every year but this is it.  This year they will finally miss the finals.

New owners and – as one glance at that massive transfer sheet will tell you – practically a new team.  One of the wildest stories from last season of the A-League was the announcement that Melbourne Heart, one of the smallest teams in the competition, had been purchased by Manchester City and would be ear-marked for the same funding and development that New York City FC received.  Hence the new sky-blue strip and the 10 game loan stint for David Villa, fresh from playing for Spain in the World Cup.  Fox Sports contributor Simon Hill says the owners intend for City to build a fan base up to 20,000 people (a near 300% increase from where they are currently) and to begin winning trophies quick smart.  Rome wasn’t built in a day however and I don’t think a completely new team that has a star player who will only be there for 10 games is going to get the job done.

City should be a conduit for attracting plenty of star talent in the next few years though.  Plenty of people are predicting that Frank Lampard will do a stint at the club and basically any big name player under contract to Manchester City who is pushing thirty is a chance for playing in the A-League.  The owners know that the EPL talent draws crowds so if they are serious about reaching their membership goals, they’ll need as many as they can get.

On paper, Melbourne Victory look like the team to beat.  After periods of inconsistency last season under new coach Kevin Muscat, the Victory came good towards the end of the season and they haven’t looked back.  After losing a closely contested semi final with Brisbane Roar, the only difference between the two clubs appeared to be Besart Berisha and now he wears their colours.  They have been in ominous form in the pre-season with Berisha scoring for fun and linking up well with Gui Finkler.

Honestly, I believe the only limitations for this club is coach Kevin Muscat who I think is an average coach at best.  Let’s not forget last season the club lost back-t0-back five nil games against Wellington and Sydney FC and it was when Muscat persisted with a formation that was getting brutally exposed by the opposition which he stubbornly refused to change.  If for some reason Berisha doesn’t get the service he requires, then I don’t know how quickly Muscat can find a Plan B.  Make no mistake, the club is building their fortunes this season almost entirely around Bess.  If it works, they could be unstoppable.  If it doesn’t…neither Berisha nor Muscat are known for their cool heads and diplomacy.

There’s not much to get excited about in the Hunter Valley if you’re a football fan.  They lost their Golden Boot winning striker and they signed a bunch of ne’er do wells and no hopers.  Ladies and gentlemen, your wooden spooners for 2014/15.  You can put the mortgage, the kids, the family dog and all your worldly possessions on it.

If there was a team that could possibly challenge Newcastle for the wooden spoon it’d be Perth Glory but to Kenny Lowe’s credit, he’s actually signed some pretty handy players for this season.  The problem is, he’s still Kenny Lowe, a coach with one of the worst records in the competition.  I think the team have the talent to eventually improve their prospects but it will take time to rebuild after the morale killer that was Jacob Burns and it will remain to be seen who emerges as the new locker room leader.  The club needs a serious cultural overhaul.  This might be the season it finally happens.

In my eyes, the team to be beat and odds on favourite to win the whole damn thing.  The club had a horrendous time under Frank Farina and although Alessandro Del Piero was a fan favourite who scored a ton of goals, you can’t be serious title contenders and build your squad around a 38 year old striker.  Enter Graham Arnold, a proven coach with championship winning credentials.  He has made the best signs in the pre-season, has an ominous striker force that he has built between Brosque, Janko and Ibini.  Even Smeltz is an X-factor that you image could potentially reinvigorate his career under a guy like Arnold.  The club used to inexplicably sign a bunch of woeful ham and eggers for their defence but Arnold has all but cleared them out.  They had a cracking preseason where they beat West Ham United and Brisbane Roar.  Look out.

Everyone’s favourite underdog team.  Like Adelaide and Melbourne Heart, the Phoenix had a horrendous opening third to last season taking ten rounds to really start motoring and by then it was too late.  Ernie Merrick is a shrewd coach however and he eventually got the team on a run of form that almost saw them storm into the finals.  The club has had some good off-season signings if their friendly against Newcastle United was anything to go by and they’ll be pleased to finally have Michael McGlinchey back at the club after a courtroom battle for his services broke out between the Phoenix and the Mariners.

Travel and squad depth are the perennial bug bears for the Phoenix but as ever, you can never quite right them off.  Well, I say that but I sort of am because I’m predicting they’ll just miss out on the finals.  Again.

What other club could lose as many talented players as the Wanderers did in their off season and still be considered genuine title contenders?  The Wanderers will miss the flair and talent of inaugural marquee players Shinji Ono and the gritty determination of Yusef Hersi and Jerome Polenz but at the end of the day, the club is still a force to be reckoned with thanks to the peerless coaching talent of Tony Popovic.

The Wanderers become just the second A-League team to make the finals of the Asian Champions League after they beat FC Seoul and Guangzhou Evergrande in the semis and quarters.  The Guangzhou encounters were particularly memorable as they are coached by World Cup winning manager Marcelo Lippi and are the biggest club in Asia with a squad worth ten times as much as the Wanderers.  The Guangzhou fans took defeat in the first leg at Pirtek Stadium so badly that Lippi ran onto the field to accost the referee and when the Wanderers traveled to China for the away leg, they were purposefully kept awake at night, had cars purposefully crashed into their tour bus (!!!) and had to deal with fans using laser pointers at the players eyes on the field.

The club is a model of consistency and discipline and I think the only thing they are missing is an out and out striker that is good for more than ten goals a season.  Last year both Bridge and Juric failed to fire with any consistency and although it got them to the Grand Final, they were unable to go all the way.  The club has played two seasons and made two grand finals.  This might finally be the season they go all the way.

So my prediction for the league ladder this year looks as follows: 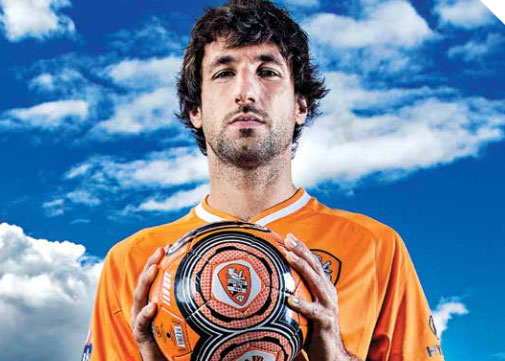 I’ll revisit this post at the end of the season and we can laugh at how wrong I was again. 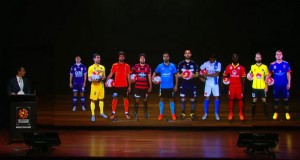 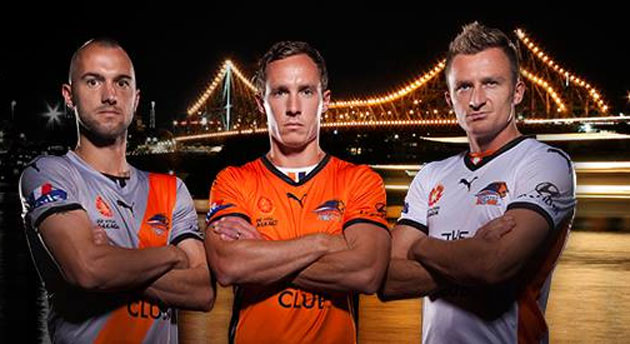