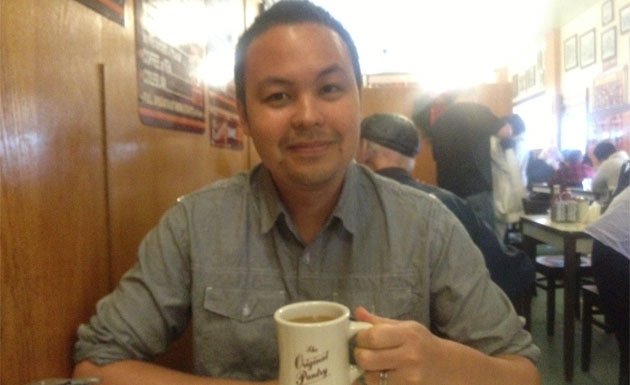 Flying into Los Angeles from Brisbane is basically embarking on the longest day of your life.  We flew out of Brisbane Airport at 10am, sat on the plane for 14 hours, then landed in LAX on the same day at 7am.  If you don’t get some sleep on the plane, you’ve got a seriously long day ahead of you.

We didn’t have time for sleeping in or feeling jet lagged.  Los Angeles was the first stop of our three week holiday in America.  We only had one day in Los Angeles so we tried to make the most of it.  Unlike the other cities, we didn’t really plan anything for L.A.  We were just going to do the touristy stuff and spend 24 hours to take in the whole ‘being in America’ experience. 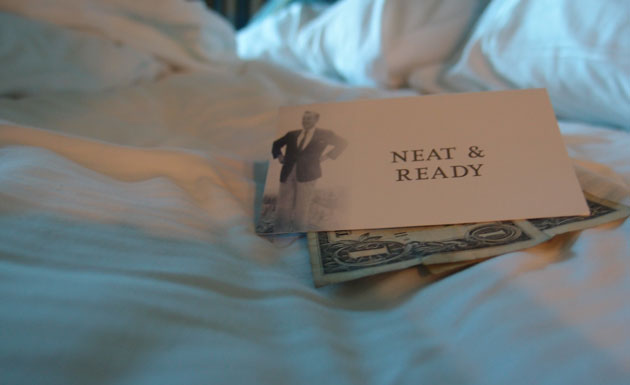 Arriving at the hotel from the airport gave me a first taste for tipping.  You’re supposed to tip 10% to the taxi driver.  So a forty dollar ride to Downtown Los Angeles means you’re handing over $44.  The bell boy at the hotel takes your bags.  You check in.  When you get to the room, you tip a-dollar-a-bag to the porter who brings the bags to your room.  Then make sure you have another couple of bucks set aside because you’re supposed to tip the cleaning service too.

You get used to this system but I find the whole thing pretty stupid really.  America is a country with a criminally low minimum wage – $2.13 per hour if you work a ‘tippable job’, $7.25 if you’re not – and basically you, the customer, are subsidizing a gigantic portion of the salary of the staff in low income jobs.  In the case of tipping staff, you’re literally paying them more than 70% of their income.  In the non-tipping Western world, employee salaries comprise one of the biggest operational costs for a business.  In America, your front line staff are paid almost nothing because cultural conditioning means that customers pay them for you.

Which explains why the country has a ton of millionaires (the famous ‘One Percenters’) but 52% of household incomes  in America earn less than $50,000.  The average income for a male in Australia ($52,000) is greater than the combined household income of over half of America.

If you ever want to read about what its like living off a minimum wage income in America, I recommend Nickel and Dimed, in which a Washington Post journalist spends a year trying to live off minimum wage jobs.

Needless to say, I was rather sad when I saw people working minimum wage jobs.  Unlike Australia where service industry jobs and fast food restaurants are typically staffed by students, backpackers and teenagers, there were plenty of middle aged people and Mexican immigrants working these jobs in America.  The thought of a grown man or woman slugging their guts out in a diner for seven bucks an hour bummed me out. 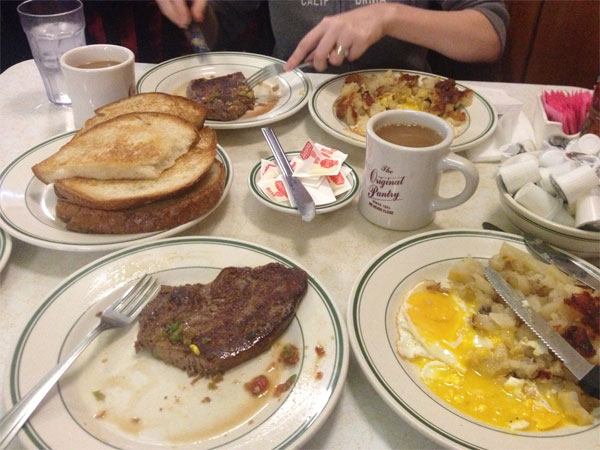 A $7 breakfast at The Pantry

Our first stop was getting some breakfast at a diner.  The hotel concierge recommended The Pantry and he was right on the money.  The Pantry is a well established eatery in Downtown, running 24 hours a day since 1924.  It is exactly the type of experienced I wanted as a first taste of America.

Even at 7am, there was a queue to get in, such is the venue’s popularity.  Actually, maybe its an American thing.  We queued for just about everything.  Lining up in front of me were three middle aged men.  Well, there were two of them and they anxiously awaited the arrival of a third who turned up late.  They bantered back and forth about work, about one guy’s bad knee and about the news that some NFL player had committed a murder-homicide over the weekend.  After a while, I picked up on their names.  Slick Rick, Spanky and Dale.  I was delighted.  What wonderfully American names!  They were more or less how I imagined the American working class to be – overweight, carrying medical ailments and with infectiously cheery dispositions.

Diner food is cheap.  An order of magnitude cheaper than an Aussie breakfast.  Five bucks gets you several rashers of bacon, a couple of eggs, practically an entire loaf of bread (buttered) and for a couple of bucks more, you get a ‘steak’ that has the texture and consistency of a shoe.  Coffee is percolated and 50 cents, with unlimited refills.  And I don’t mean you can go to the counter and ask for more.  Your server will continually walk past and top you up.  I think I had about four cups of coffee at that place.  Day One Enthusiasm meant I had a good go at eating the steak but it was too big and chewy for me to finish.  Still, I loved the whole experience.  The service was fast, efficient and friendly.  After breakfast, we went for a stroll.  It was time to go exploring. 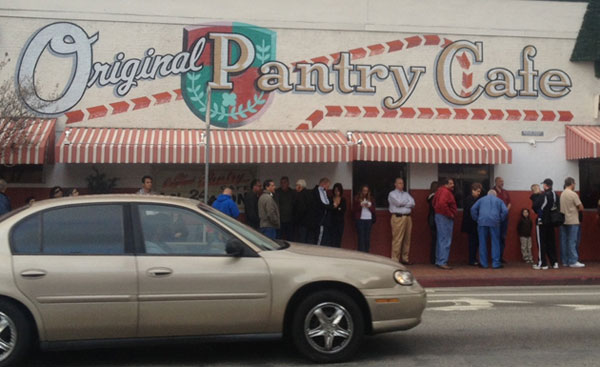 The Pantry Cafe – operating since 1924. It seems to permanently have a line of customers out the door

We made a mistake not getting a car.  We should’ve done our homework and I even had a friend advise against visiting Los Angeles if you don’t have one.  L.A is a giant sprawling city and its pretty hard to get around without hiring a car.  Our hotel was in Downtown L.A so we tried exploring and didn’t get very far.  There are non-descript buildings that run for miles in every direction and although we would occasionally walk past a famous landmark like the Staples Center, its not particularly interesting in the middle of the day.

Downtown also has some pretty creepy people wandering around, even at 7am.  We walked past plenty of unsavoury people like hobos, drug dealers and a random crazy person swearing at the top of their voice.  Not really what we wanted first thing in the morning.  We decided the best way to see the city on short notice was to get on one of those ubiquitous Hop On Hop Off bus tours. 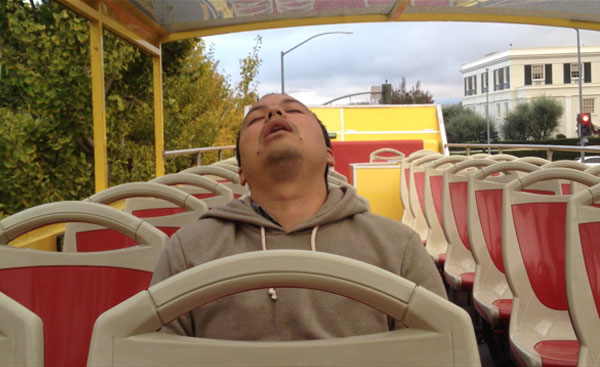 The Hop On Hop Off bus tour is a pretty cheap and hassle free way to see the best that Los Angeles has to offer.  Unfortunately for me, I didn’t find Los Angeles all that interesting.  Our bus tour took us to the Chinese Theatre, the Hollywood Walk of Fame, the luxury shops in Burbank, the Sunset Strip where famous Hollywood parties occur and…uh, yeah.  I think I’m not the target demographic for the typical Hollywood tour at all.  It would probably be the dream tour for a regular subscriber to Womens Weekly or for someone who reads TMZ.  The tour guide excitedly points out locations like where Tom Hanks was seen having coffee or where Kim Kardashian shops for evening wear.  I’m pretty sure it wasn’t the jet lag that was making me fall asleep.  Worst still, the tour had a rather dubious and salacious nature about it when it drove to ‘landmarks’ like the Viper Pit where you can take a photo of the gutter where River Phoenix OD’ed and died.  Er, no thanks.

An observation about getting around in Los Angeles:  it pretty much has the worst set of roads in the world.  There is frequently horrible trafffic jams where even multi-lane freeways get backed up for miles.  And if you’re lucky enough to be out on the open road, then you get the pleasure of bouncing around some of the crappiest streets I’ve seen since Jalan Kota Batu in the Eighties.  All the roads have massive cracks, pot holes and several different shades of tarmac coated on top of one another.  I don’t understand how a city that is home to a billion dollar industry like Hollywood apparently lacks the infrastructure to have roads that don’t look like they came from the stone age. 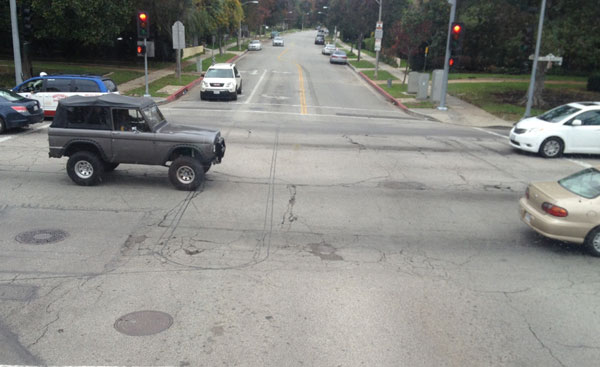 Roads in LA – not all they’re cracked up to be

In the end we spent the afternoon stocking up on winter clothing at a department store on Santa Monica pier and then spent three hours getting back to our hotel.  It took two hour on the Hop On Hop Off tour bus and then we got waylaid by a dodgy cab driver who deliberately took us through traffic to get us back to the hotel.

All in all, I didn’t really care much for Los Angeles.  It’s sprawling, falling apart at the seams and lacking in character.  The American holiday started on a slightly dour note but it picked up rapidly after the first day.