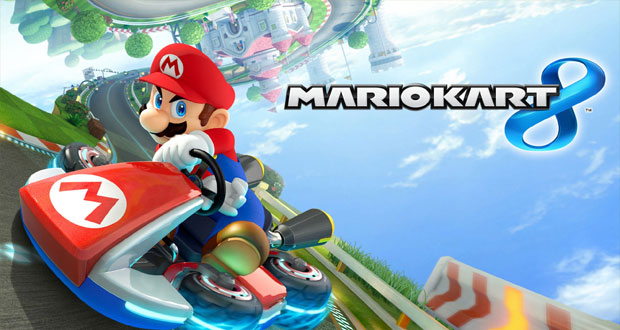 Twenty two years ago, Nintendo released Super Mario Kart on the Super Nintendo to both critical and commercial acclaim.  The game features eight characters racing across twenty different tracks.  Players could power slide around winding corners and displace the racer ahead of them with a well timed fling of a turtle shell.  It was an entertainingly chaotic arcade racer that was unlike anything that preceded it.  That game single handedly created the kart racing genre and it has ruled the roost as the best of breed ever since (sorry Crash Team Racing and Sonic Allstars fans).

Two decades and seven iterations later and we have arrived at Mario Kart 8.  The game is an absolute beast.  It runs at an eye watering 60 frames per second and has never looked better.  It has 30 playable characters with more to come.  32 tracks, including sixteen entirely new designs and a selection of classics including Donut Plains 3 from the original game.  There are endless customization options.  The karts themselves can morph into underwater and air gliding racers when called upon and to further up the ante, they can also defy gravity and race along walls and upside down.  The blueprint and DNA of the original game is still there but twenty two years of tinkering and iterating continue to push the game forward to new heights.  Mario Kart 8 is the best game in a series that has been consistently enthralling.

Graphically, the jump to HD (a first for the series) is a significant one.  By retaining a rock solid high frame rate, it not only gives the game an obvious aesthetic improvement over its Wii predecessor, the sense of speed is heightened too.  When I first began to play the game in July, I was actually taken aback by just how sharp and striking everything looked.  Although the graphics engine in the Wii U is comparable in horsepower to the near decade old Xbox 360 and Playstation 3, this game is a sight to behold.  Thanks to some canny use of light and shading coupled with the unfettered creativity shown in the track design, Mario Kart 8 looks absolutely gorgeous and even after putting several months into the game, I’m still struck by how mesmerizing Rainbow Road looks and how pictureseque the rolling greens of Moo Moo Meadows are.  The bold and bright colour palette, the little touches with the character animations, the orchestral soundtrack – it all comes together as one very complete package.  The presentation is first class and Mario Kart has never looked so good.

In terms of the play mechanics, the game has received a further tweak since Mario Kart 7 on the 3DS.  The anti-gravity karts allow for yet more creativity and options to be taken when driving on the courses and the inclusion of a speed boost mechanic that occurs when the player bumps an opponent or an anti-gravity node encourages aggressive and chaotic driving even more.  With twelve karts per race, the tracks are wider than ever to accommodate the carnage and the new tracks are universally excellent in their design.  My personal favourites would be Cloudtop Cruise (partly because they bring back a new variation on the wonderful Gusty Garden theme from the Mario Galaxy games) and Bowser’s Castle which is surely as atmospheric and imposing a track that Nintendo EAD have created.

New weapons have been introduced to the series including the piranha plant which is a visually hilarious and potent new item that serves a player well when they’re in the middle of the pack and facing congestion.  There’s also a new item called Super Horn which sends out a shock wave taking out anyone in the immediate vicinity but crucially its also an item that can be picked up in first place and can be used to destroy the blue shell.  Its rare enough that it doesn’t nerf the blue shell entirely but its a welcome addition that shakes up the unpredictability of a race even further. 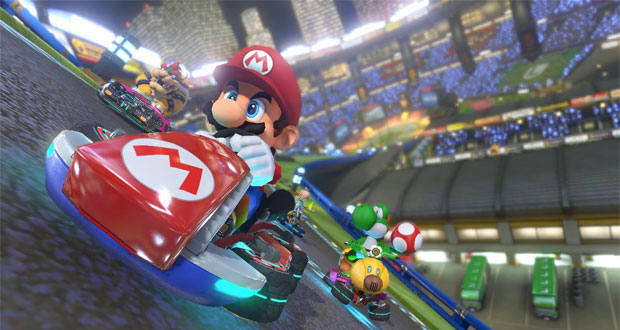 In general, I feel as though the game is closer to Mario Kart 7 than it is to Mario Kart Wii when it comes to its balance and difficulty.  Blue shells, bullet bills and rubber banding AI ensure that an advanced player won’t finish first every time but this is definitely a game where an experienced player should be able to finish ahead of a newbie on a much more consistent basis.

One curious change I noticed as I played through the single players tournaments to unlock content is that I’ve ended up preferring the middle weight class racers over the heavies.  For every single version of the game prior, Bowser had been one of my go to choices but this time around, I found I got much better results with Yoshi.  I can’t actually put my finger or what has changed in terms of the gameplay or track design that made this the case but I just wasn’t getting the results I wanted with the bigger guys anymore.  Same goes for multiplayer.

A real highlight of the game is how well implemented the online mode is.  The matchmaking is lightning fast and I found the net code to be excellent with very, very few races showing any problems with input lag.  As with all the newer versions of the game,  its a neat touch to play online in the international races and see the little country flags showing you just what a widespread and eclectic mix of nationalities you’re coming up against.  Mario Kart 8 is also the first game in the series to introduce social media integration.  This is a welcome addition and pretty well executed (dare I say better than the PS4 and Xbox One currently).  Each race is automatically recorded to a program called Mario Kart TV and if you finish a close race where you pipped your buddy to first place with a last minute red shell, you can upload it onto Youtube and the editing is all handled on the fly by the inhouse software.  I tried it after a particularly close race with a friend and it worked a treat.  It’s interesting to see that Nintendo has been extremely slow in embracing online features and functionality and yet once they finally commit to doing so, their execution has been excellent.

Speaking of late additions of industry standards, Mario Kart 8 is the first game in the series to include downloadable content and the early signs are promising.  After a curious and unexpected free download of a real life Mercedes car, Nintendo announced two upcoming DLC packs that will offer sixteen new tracks (increasing the ingame content by a whopping 50%) as well as a swag of new characters and customizable add-ons.  The most interesting thing to note is that this extra content signals perhaps the first time that Nintendo will shift the focus of the game from being a Mario-centric affair to something that encompasses the entire Nintendo universe.  The new tracks and characters include content from The Legend of Zelda, Animal Crossing and Excite Bike.  One wonders whether the inevitable Mario Kart 9 might actually end up being the first Nintendo Kart game.

It plays great, it looks amazing and is the most content and feature rich installment of the series.  Is it the perfect kart racer?  Almost.  If there’s one gripe I have with the game, its actually a pretty big one.  Cast your mind back to that original Super Mario Kart game.  It had two things that drew people back time and again.  It had a great tournament mode but it also had a fantastic battle mode and for some inexplicable reason, Nintendo keep dropping the ball on this aspect of the game.  The formula that every kart-loving fan of the series wants is really simple.  Give us a handful of arenas where every player has three balloons and you can go to war throwing shells, boomerangs, banana peels and piranha plants at one another.  Is that really so difficult?  In Mario Kart 8, Nintendo have included a battle mode that overlays the three balloon mechanic over a regular course.  Put bluntly, it doesn’t work and it isn’t fun.  If a future iteration of the game (or even a DLC pack I guess) could recitfy this oversight whilst keeping the quality of everything else, we could probably pack it up, call it a day and declare Mario Kart as having achieved kart racing perfection.

As it stands, the game is still endlessly playable and fun.  I eagerly await the arrival of the first DLC pack in November and the chance to race as Link.  See you on Rainbow Road.

The latest version of Mario Kart introduces high definition graphics, anti-gravity and other Nintendo franchises into the mix with great results

Summary : An incredibly polished and feature rich installment of the Mario Kart franchise. The game has never looked or played better.

Tagged with: Mario Kart Nintendo Nintendo Wii U Wii U