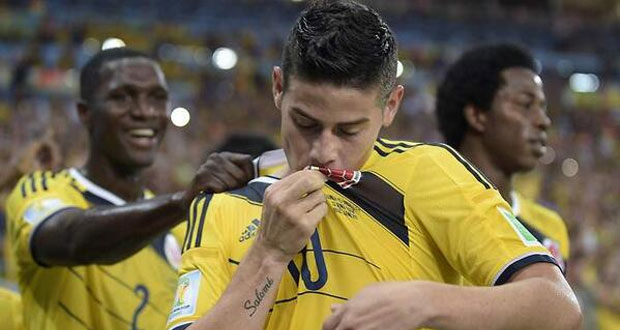 Every good World Cup tournament worth its salt needs a good villain.  Think Argentina in Italia 1990 or Italy in Germany 2006.  Brazil 2014 got the perfect Team-You-Love-To-Hate when Luis Suarez took a bite out of Chiallini’s shoulder.  His subsequent denial and unrepentant behavior (“I fell on his shoulder and hurt my teeth“) have made Uruguay public enemy number one.

Colombia on the other hand have been winning hearts and minds in the tournament thanks to their free flowing football and the emergence of James Rodriguez as a star.  In the group stage he had three goals and four assists to his name and at 22 years of age, the world is his oyster.

Villains versus upstarts.  Forlan v Rodriguez.  Who will come out on top?

5′  I fell asleep on the couch.  Missed the start.

10′  Uruguay happy to sit deep, looking to hit Colombia on the counter.  Worked well in the group stages.  They are very compact at the back.

A contender for second best goal of the tournament after Cahill!

35′  Okay everyone on Twitter be cool.  Stop saying that goal was better than Cahill’s

38′  Uruguay had a pretty legit claim for a penalty there as Forlan gets bodychecked pretty blatantly.  He loses his shit at Ypres.  No penalty given.

How will Uruguay go pushing forward in the second half?  Goes without saying but they look pretty iffy without Suarez.

Hames again.  Moves into pole position for the Golden Boot.  The first player in the tournament to reach five goals.  A star is born.  The goal was a thing of beauty too.  Great teamwork.

Man watching this Colombian game I think I have my fav player in the world cup! Obviously his name help that out #Biased #10 #James #WC2014

As a fan of BASEketball, I love overly extravagant goal celebrations.

See ya Uruguay, wouldn’t want to be ya.