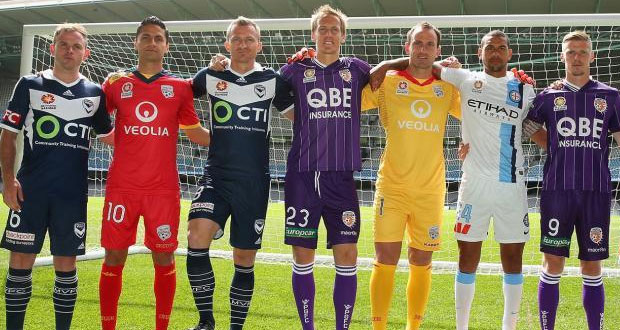 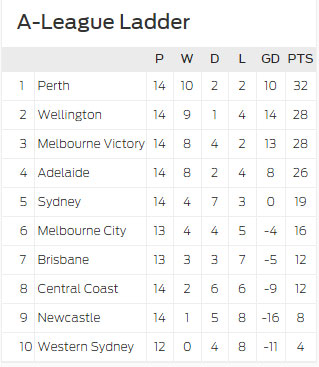 Melbourne Victory’s 2-1 away win over the hapless Western Sydney Wanderers wrapped up the first half of the 2014/15 A-League season which will now be taking a 4 week hiatus while the Asian Cup takes place.  It’s a handy time for me to finally catch up on my football blogging.  We’re at the half way marker and here’s my assessment of how the teams have performed thus far.

This has been an absolutely disastrous season for the Roar.  After thirteen matches the club has somehow managed to lose their coach, their captain, the trust of their fan base and any sense of aura they had built up in the previous four seasons.  Much has already been written about the problems at the club and the final game before the break – a demoralizing three nil drubbing at the hands of the Wellington Phoenix – showed that many of the problems they had in Round 6 when they sacked Mikey Mulvey, are still present in the club today.  The players still bicker with one another on the field.  The playing style is absolutely nothing like the system the team used in the last four years.  The recruiting has been abysmal with Sarota, Kurtishi and Young all failing to make a positive impression.  It looks like a long way back for the Roar and a genuine struggle to reach the finals.

To turn things around, the club has recruited Jerome Polenz and is apparently on the cusp of signing Luke Devere.  Along with the return of injured keeper Michael Theo, that should help shore up a leaky defence.  They still need a striker though as Kurtishi has been an unmitigated disaster as a replacement for Besart Berisha.

Who saw the utter domination of the A-League by Perth Glory coming during the pre-season?  Not I!

Credit to coach Kenny Lowe who – through canny off-season signings and dogged persistence – has put together a squad of journeymen, youngsters and no-name talent that is doing brilliantly at hiding their weaknesses and playing to their strengths.  It’s something the Roar could badly learn a lesson or two from.

Andy Keogh is obviously the stand out signing.  The talented Irishman has been scoring goals for fun this season, netting key goals to help defeat Melbourne Victory away from home and lead the Glory to the inaugural FFA Cup final.  The team are currently an impressive four points clear of the chasing pack and have been as far ahead as seven points at times.

Everyone has been predicting an eventual drop off in form at the business end of the season but I think at this stage its pretty safe to say that the club are comfortable favourites to win the Premiere’s Plate.  Whether they can hold their nerve and win in the finals against the likes of a Melbourne Victory or Adelaide United is another matter.  The Reds have had the measure of Perth, beating them in three out of three games.

Who predicted that Wellington Phoenix would have the strongest pre-season signings, would discover the ability to win away from home and become a credible threat at taking out some silverware at the end of the season?  Not me!  (you’ll notice a pattern with my predictions for this season)

Ernie Merrick has done it again.  After successfully leading Melbourne Victory to two titles, he has built a formidable new team at the Phoenix from the ground up and made them an absolute force in attack.  Nathan Burns is the league’s top scorer and he is in good company with Roy Krishna being a handy companion in finding the back of the net.  Roly Bonevacia is one of the best new talents in the league and the flying Dutchman has been instrumental in bossing the midfield and helping turn around the Phoenix’s fortunes.  Credit must also go to Merrick for taking the same group of defenders and turning them into a cohesive unit that is greatly improved on last year.

This is the Phoenix’s best ever shot at winning their maiden championship.

In a topsy turvy season where wooden spooners became title favourites and champions became basement dwellers, Melbourne Victory are one of the few clubs in the top half of the competition who are performing more or less at the level they should be.  I always felt the club had recruited smartly and have the foundations for a great side but Kevin Muscat’s shortcomings as a coach would see them fall just short of picking up silverware.

Melbourne started the season hot and looked the most formidable team in the competition but then the goals dried up for Besart Berisha and after a nine game unbeaten streak, they have looked a bit ordinary in the last five rounds.

Still likely to be one of the favourites in the finals, particularly as they hold the edge in experience over Perth and Wellington.

When they’re on their game, Adelaide play some of the most attractive tikki takka football in the league, surpassing Brisbane Roar as the team to watch for playing high quality possession-based football.  Josep Gombau’s men have been rewarded for their efforts with some long awaited silverware – the FFA Cup – which broke a trophy drought of nearly nine years for the club.  The Spanish connection seems to be working a treat at Gombau’s magic has rejuvenated the careers of Craig Goodwin and Tarik Elrich.

Finishing top of the competition looks a bridge too far for the team this season but they are all but assured of Finals Football and will be one of the dark horses to win the title.  Just as Perth will want to avoid Adelaide though, Adelaide will hope to avoid meeting Melbourne Victory at the point end of the season.

Sydney FC were my tip to dominate this season and they started off promisingly enough but a horror run of season ending injuries to four first-choice players including goal scoring threat Corey Gamiero has wreaked havoc on a once promising season.  Sydney have now gone nine games without a win and are languishing in mid-table.

The only consolation for their supporter is how the Wanderers season has gone and how the bottom four clubs have performed so horrifically badly that they are in no danger of missing out of Finals Football and they have ample time to right the ship.

Sydney have had some positive new additions to the team, particularly Alex Brosque and Marco Janko but I think the gamble on Shane Smeltz and Bernie Ibini hasn’t yielded the goals that Arnold needs from them.  Sydney are a side that are expected to go shopping big time in the January transfer window.

So far the acquisition of Melbourne Heart by the City Football Group hasn’t been enough to turn around the fortunes of the perennially under-performing South Yarra club.

After this season, bandwagon football supporters will be supporting the City Football Group teams at their peril.  There was a domino effect in the failure of marquee players to meet their advertised commitments starting with Frank Lampard’s advertised move to New York City FC which failed to eventuate and subsequently David Villa who we were told would play ten games for Melbourne City played a grand total of three before departing early.  Plenty of New York and Melbourne City fans who bought tickets to games to see these famous players in action can be rightfully annoyed by the City Group’s failure to meet their commitment.

The club is currently sitting sixth which is a slower improvement than what the owners would probably like but I think when you factor in Villa’s early departure and how terrible this team was last year (bordering on ‘worst in competition history’ bad), John van’t Schip has made a modest improvement and should be commended for getting the team this far.  One would suspect that continuous improvement would be required however or else heads will soon roll.

One of the few pre-season predictions I got right was the decline of the Central Coast Mariners, one of the most consistently high achieving clubs in the competition.

The club’s good fortune finally ran out with the departure of Graham Arnold as coach and loss of veteran players like Patrick Zwaanswijk (retirement) and key playmakers like Michael McGlinchey (court enforced transfer).

All is not well in Gosford.  The club’s owner is seemingly at war with his own supporters as he publicly entertains the idea of playing more games in North Sydney which would surely cost the club dearly in terms of loyal long term supporters.  Coach Phil Moss seems to be having his own battle with the playing squad with several games in the season seeing key players left out (Zac Anderson and Eddie Bosnar most notably) without any explanation given.

The club went nine painful rounds without a win but has some hope for optimism.  In the last two rounds at home, crowd numbers have been up and they played an impressive 3-3 draw with Brisbane Roar before beating Melbourne City 2-0.

As bad as everyone expected really.

There’s not much joy to be had in the Hunter Valley at the moment if you’re a football fan.  Emile Heskey is back in England and scoring goals fifteen minutes into his career at Bolton.  Nathan Burns, the striker you released last season is the league’s top scorer at Wellington.  And that fancy goal scoring poacher Geronimo Neumann is being used as a bench warmer because who knows why.

Newcastle plays some of the worst football in the competition.  It is ugly, unattractive and simplistic football that does a disservice to some of the talent at the club.  The Jets are one of the few clubs this season to rival Brisbane Roar for crappy pre-season signings.  One of their recruits – Johnny Steel – lasted all of two rounds before being shown the door.

The club shows almost no sign of improvement.  The owner Nathan Tinkler is looking to offload the club.  Its bleak times ahead for Jets fans.  The FFA would do well to monitor the club and do everything they can to support them.

Western Sydney Wanderers made history earlier this year by becoming the first Australian club to win the Asian Champions League.  It was an extraordinary achievement for a club that is a little over two years old and on a combined salary of under $3 million dollars, they beat the glamour clubs of China, Korea and the Middle East whose players earn over ten times as much and have World Cup winning managers to guide them.

But domestically…oh, the horror!  The club is without a win this season having an absolute horror run that has seen them winless domestically from April 2014 to at least February 2015.  The Asian Champions League has come at a huge cost.  The players basically didn’t have an off-season and have played eighteen consecutive months with several players having travelled over 200,000 km in that time.  They are absolutely wrecked.

The club is right to be patient and stick with coach Tony Popovic who has inspired the club to great things.  But for how long?  No club welcomes the four week break to recouperate more than the Western Sydney Wanderers – the surprise losers of this years A-League competition.