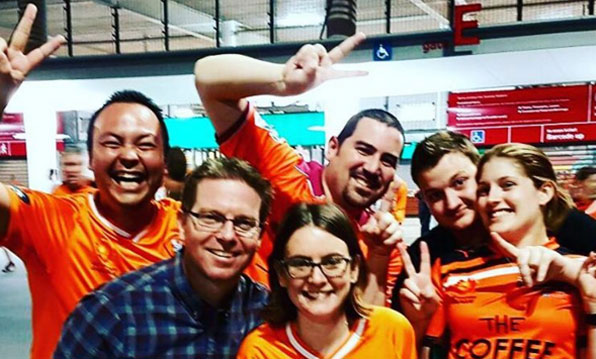 The match, the moments, the goal scorers.  You couldn’t have scripted it any better.  Brisbane Roar played at home in the first round of the finals against Melbourne Victory, the very team that denied them of the Premier’s Plate a week earlier.

The Victory were bolstered by the return of Besart Berisha from suspension.  The ace striker who had lead Brisbane Roar to two championships was back for a homecoming where he hoped to eliminate his former club and help Victory defend their championship title.  Knowing how Berisha always rose for the big occasions, I was convinced he would score against us.

The game was frustrating to watch as Melbourne starved the Roar of possession and dominated the game.  The usually unflappable Matt McKay and Corona were unable to get any sort of cohesion and were constantly turning the ball over.  But for all their territorial domination, Victory couldn’t make it count on the score board.  0-0 at half time.

The spark for the game’s dramatic finish was a challenge by Victory defender Jason Geria on Thomas Broich.  It earned Geria his second yellow card and reduced Victory to ten men.  They responded by going on the attack and just minutes later they scored from a corner thanks to – who else? – Besart Berisha.  Berisha had previously scored against the Roar and celebrated in muted fashion as a mark of respect for his former club.  Not this night.  Berisha jumped the railing and threw himself at the Victory fans as he slapped his club’s emblem on his chest.  1-0 down with four minutes to play.  A miserable end to what had been a fantastic season.

The Roar had other ideas.

They scored less than a minute after the kick off.  Petratros found captain Matt McKay who made amends for his miss last week by coolly slotting the ball past Lawrence Thomas.  In the 3rd minute of stoppage time, Thomas Broich rose above the other defenders and rocketed home the winning goal.  They had done it.  Another last minute miracle at Suncorp.

Mariners, Glory, Wanderers, Victory. Almost half the league have lost finals at Suncorp in dying moments after taking the lead #BRIvMVC

The win means that Brisbane Roar stay alive and advance to the semi finals.  They’ll face the formidable Western Sydney Wanderers who will be playing their last game at Pirtek Stadium before it undergoes renovation.  It should be a fantastic contest.