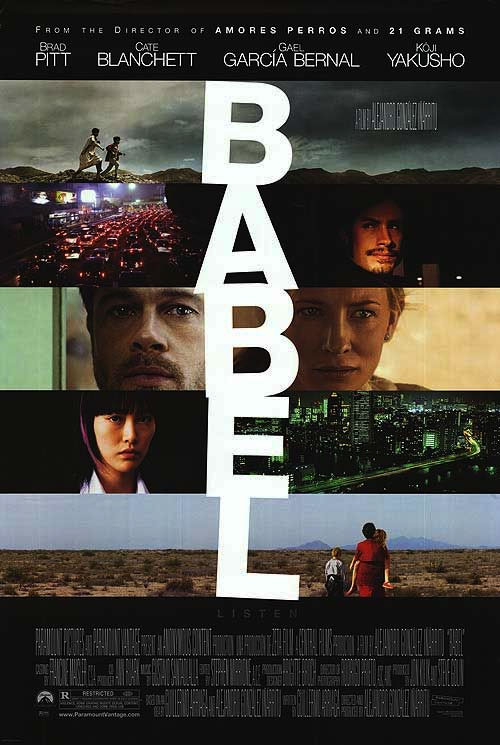 I came into Babel having only seen one other film by Alejandro González Iñárritu.  I saw Amores Perros (Love’s A Bitch) when it came out in 2000 and although I appreciate that it was a well made film, I absolutely could not watch it again.  Set in South America, the film tells three different tales that are thematically linked by  violence to dogs.  I’m not sure what motivated Iñárritu to make the film but the harshness of it stuck in my mind during the opening few minutes of Babel.

I flinched as the set up was immediately familiar.  There are four tales linked by common emotive themes and characters that occasionally cross paths.

There is the father of a destitute family in Morocco who purchases a rifle for shooting jackals to keep his herd of goats safe.  His children take the rifle and while playing with it, one of them shoot at a tourist bus.

On the tourist bus is Richard and Susan, an American couple with a failing marriage.  Susan is struck in the neck by the bullet from the rifle fired by the children.

The rifle itself was originally purchased by a Japanese tourist who has since returned home.  He is struggling to cope with the suicide of his wife and rebuild a relationship with his sexually frustrated deaf-mute teenage daughter who seeks attention by not wearing underwear, going to public places and flashing people.

Meanwhile in America, the maid for Richard and Susan is in a panic because she wants to go to Mexico for her son’s wedding but can’t find anyone to look after the American couples’ kids who are only very young.  Desperate and against her better judgment, she decides to take them with her.

That is the set up in the first act. 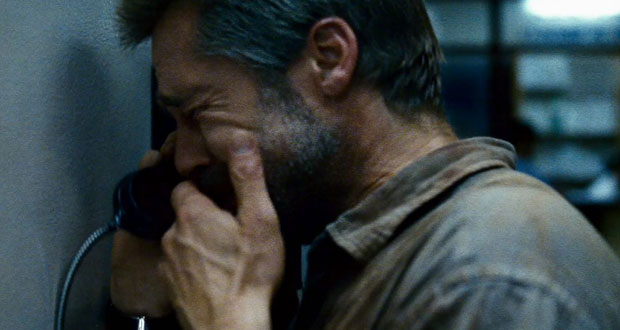 Knowing what I know of Iñárritu’s work, I anticipated that as the story unfolded Susan would die, the Moroccan kids would get arrested, the suicidal teenage girl would get raped and something bad would happen to the American kids in Mexico.

As it so happens, Iñárritu manages to make the situations more depressing that I could imagine.  He manages to strip a lot of the characters of their dignity and prolong their misery with a further twist to the tale.  I’m reminded of The Bicycle Thief in a lot of these stories.  I think the idea of proud and good natured people dealing with tough times and resorting to desperate measures must strike a cord with Iñárritu.  Often, these situations are antagonised further by bad luck or miscommunication.

I guessed wrong with all my predictions.  In the end, Susan doesn’t die.  Instead she lies in a village with her husband, abandoned by the tour bus.  She is drugged up and she wets herself.

The Moroccan police come looking for the shooter.  They find the boys and in a shoot out, one of them dies.  It’s not the boy who fired at the bus though, but his brother who was innocent.  The father weeps over his dead son’s body.

The maid enjoys her son’s wedding without incident.  On returning to America though, her nephew panics at the border and drives through illegally, leaving her and the children alone in the desert.  She leaves the children behind to look for help and is eventually found, arrested and deported back to Mexico by the border patrol.

As a stand alone film, I’m not sure how much you can get out of Babel.  It’s a series of increasingly wretched and miserable slice of life stories and there is little in the way of catharsis.  I do feel that Iñárritu’s own life must be tied quite strongly to the themes of the films he makes though.  The closing credits to this film dedicate it to his children.  I think that you will be able to get more out of Babel when you view it as a part of a body of work by Iñárritu, starting with Amorres Peros and finishing with whatever comes after Babel.

There are signs there that his works are developing and changing.  While the ending to Amorres Peros was bleak and dispairing, Babel does offer its audience a glimmer of hope.  The final scene in the film returns to the deaf-mute girl in Japan.  She fails at getting any attention from the men she desires, culminating in a moment where she stands completely naked in front of a police detective who spurns her advances.

The ending teases that she has commited suicide and jumped off the balcony of her apartment.  When we see her father return home and walk to the balcony, she is still standing there.  He holds her hand and they embrace.  Either Iñárritu is getting soft in his old age or maybe its a sign that he’s entering a new chapter in his film making career and becoming more of an optimist.  Perhaps his next film will be a romantic comedy.

Tragedy strikes a married couple on vacation in the Moroccan desert, touching off an interlocking story involving four different families.

Summary : A series of miserable and depressing events, one after the other. It is artfully constructed but I wonder what its all in aid of.