The Fall – Season One 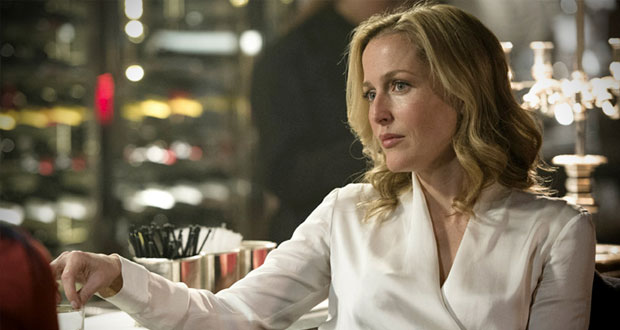 The Fall
Season One

Whenever I visit the DVD section of the ABC Shop, I am reminded of the United Kingdom’s affinity for crime drama.  I have it on good authority that they produce five million cop shows a year, six million on leap years.  With such a deluge of content and with practically every variation of the murder mystery told, it often falls to the charisma of the crime solver and the killer to help a show stand out from its contemporaries.

I discovered The Fall on Netflix in January and it didn’t take me long to plough through the first season.  Partly because I enjoyed getting reacquainted with the wonderful Gillian Anderson who plays Superintendent Stella Gibson and partly because the season is all of five episodes in length.

The Fall is produced by the BBC and has a lot of the edgy coolness of modern crime dramas like Luther and The Killing.  The first season covers the man hunt for the serial killer Paul Spector – a family man with a wife and kids who secretly sneaks out at night and performs elaborate murders of wealthy, brunette females.  Most of this investigative work handled by Gibson is done via psychoanalysis.  We seldom see her rolling up the sleeves and hunting for clues.  Instead you’re more likely to see her having a coffee in a cafe and thoughtfully mulling over the sexual desires of the killer at large.

And sexuality is The Fall‘s ace in the hole.  Sex is an ever present topic and theme in The Fall.  Most obviously, it is the driving force for Spector in carrying out his murders.  He has developed a very particular, lethal fetish for dark haired women of a certain type.  But it doesn’t stop there.  Stella Gibson is a clinical and methodical character with an unflappable personality and this applies to her attitude to sex.  She beds co-workers and strangers with a sense of detachment that leaves devastated and love lorn men in her wake.

This cavalier attitude to sex brings unwanted scrutiny upon Gibson when she sleeps with a married police officer who is murdered soon after but she brooks no hypocrisy.  When her superior Jim Burns reprimands her after the one night stand with the officer is leaked to the media, she points out that no blame is placed on the married officer who was complicit in the act and that Burns himself has slept with Gibson and still comes home to his wife every night.  Not surprisingly, Burns has little retort.

A taboo sexual attraction is also likely to be the eventual undoing of Spector.  Although he goes to great lengths to cover his tracks, Spector is compromised by a family friend – a fifteen year old school girl named Katie who begins to suspect that Spector is the serial killer making headlines.  Instead of running to the police or confiding in anyone, she develops a fascination for him and develops a physical attraction to him.  It’s a clever twist to the tale.  Spector is calm, controlling and all powerful when he attacks his prey but he is flummoxed and unsure of what to do when faced with Katie.

The first season of The Fall is a pleasure to watch although it is largely concerned with setting up the stakes and not so much in resolving anything conclusively.  Like the American version of The Killing before it, its quite possible that they could botch the pay off when the time comes.  I hope that doesn’t happen though.  Irrespective, its great to see Gillian Anderson back on TV and in such an interesting role.  All these years after The X-Files, she’s still got it.

TV Show Round Up: Luther – Season One