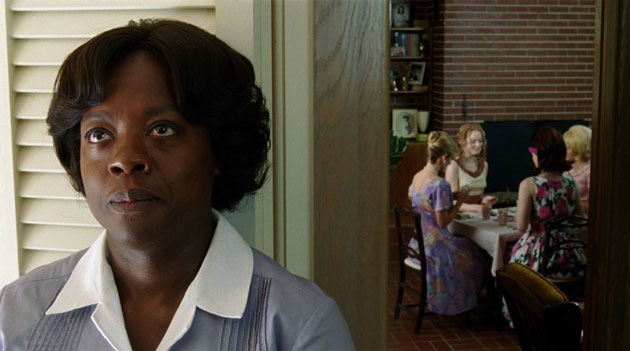 The Help is one of those films in which the tone of the trailer is completely disconnected from the content of the actual film itself.  Based on a best-selling novel by Katheryn Stockett, it tells the story of a brave group of African-American housemaids in the Sixties who risked longterm unemployment by cooperating with a young caucasian journalist in writing a tell-all book about their experiences.  The trailer for The Help is full of sassy Stepford wives, feel good music and Hollywood Voiceover Guy talking about overcoming odds.  There’s some comic relief in the form of a stuck up, racist housewife screaming at a bunch of toilet seats being scattered on her perfect lawn for good measure.  It seems like a positively light-hearted take on some rather heavy subject matter.

In actuality, The Help might well be the Feel-Bad Movie of the Year.  Clocking in at nearly three hours long, it does show, at least on face value, a bright and cheery suburban America.  It’s the swinging Sixties and that means garish wallpaper, nuclear families and American baby boomers enjoying their prosperity.  Underneath the surface however, we see a society that is still rife with racism, sexism and a litany of other social issues including but not limited to arranged marriages, homophobia, domestic abuse, child neglect and child labour.  That stuff didn’t make it into the trailer.

Although there is an ensemble cast, we primarily view the world of The Help and identify with the plights of two women in particular – Skeeter Phelps and Aibileen Clark.  Skeeter is a progressive young caucasian woman who is completely free from the shackles of societal expectation.  Unlike most of her female friends, she aspires to have a professional career and feels no rush or obligation to meet and marry a man.  Skeeter breaks into journalism by writing a domestic help column in the local paper.  Her ultimate ambitious is to write novels.  We come to learn that a key influence in Skeeter’s social attitude comes from her close childhood relationship with her black maid Constantine.  Her empathy for the plight of African American maids becomes the lynch-pin for what transpires later in the film.  Skeeter decides that she can highlight the plight of the maids and the treatment they receive when she recruits Aibileen for assistance in writing her domestic help column and notices the continously poor treatment that she receives.

Aibileen doesn’t share Skeeter’s zest for life or willingness to challenge social norms.  She is old, tired and weary of the world.  Aibileen barely holds it together trying to cope with the loss of her adult son who was killed through extreme workplace negligence and indifference from his white employees.  Aibileen clings to the small pleasures in life – caring for children, attending church and spending time with a close circle of friends.  She is deeply reluctant and hesitant to go along with Skeeter’s proposal to write a tell all book.  She doesn’t have the emotional energy and cannot afford the risk of being put out of work.  The catalyst for change is a social queen bee named Hilly Holbrook who proposes a law that forces maids to use seperate bathrooms from the family they work for.  After Hilly fires Aibileen’s good friend Minny for using her bathroom, Aibileen finally agrees to be involved in the book.

I suspect that because its source material is a 400 page novel, The Help is uncommonly detailed in its plot and stacked with more characters than you might expect of such a film.  Although Skeeter and Aibileen’s journey is at the heart of the film, there are also plenty of secondary characters who have their own stories to tell.  The most interesting of which is Jessica Chastaine’s performance as Celia Foote, a friendless trophy wife who is new to the neighbourhood and suddenly finds herself in need of a maid for both companionship and life lessons on how to cook, clean and look after a home.  Celia’s developing friendship with Minny practically steals the show.

On top of that, there is the matter of Skeeter’s strained relationship with her terminally ill mother, Minny’s problems with an abusive husband and Aibileen’s personal demons in coping with the loss of her son.  There is plenty to absorb in this film.

I really liked The Help.  The subject matter that it covers is pretty well worn territory in film and there is a fine line to walk to avoid being a three hour soapbox sermon.  The Help handles this balance rather well.  It certainly highlights the reality of 1960s social injustice but isn’t needlessly bleak.  Aibileen provides a much needed emotional gravitas to the film while Emma Stone delivers a fine performance as Skeeter and provides an air of optimism and hope.

Summary : Don't be put off by the trailer which is pure schmaltz. This is actually an excellent sociology study of the Sixties in suburban America.

Tagged with: Emma Stone The Help