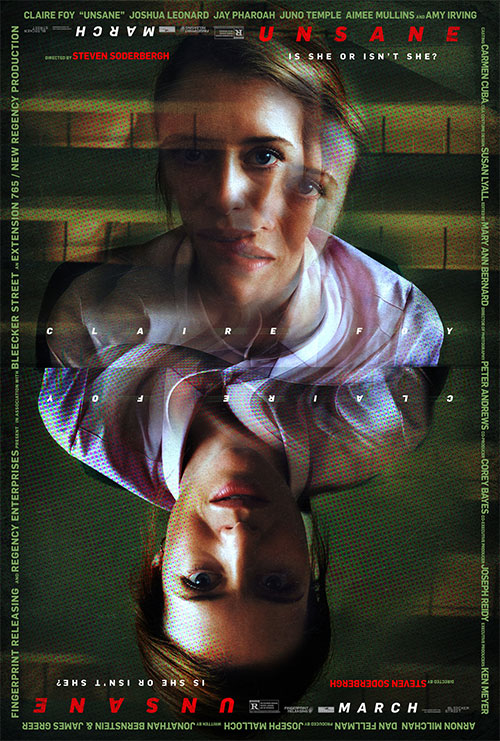 Is there a more versatile film maker than Steven Soderbergh?  For a guy who has been making films for over three decades, he hasn’t been one to rest on his laurels or settle into a particular groove.  Just look at this filmography in the last eight years – Logan Lucky, Behind The Candelabra, Magic Mike, Haywire, Contagion.  He’s gone from NASCAR to Liberace to male strippers to low budget action to modern day Outbreak.

If you haven’t heard of Unsane‘s gimmick, it’ll maybe take you thirty seconds to clue into whats going on.  The shot selection and editing looks conventional but something will tweak in your brain that the film looks…different.  It’s because Unsane was shot entirely on an iPhone. 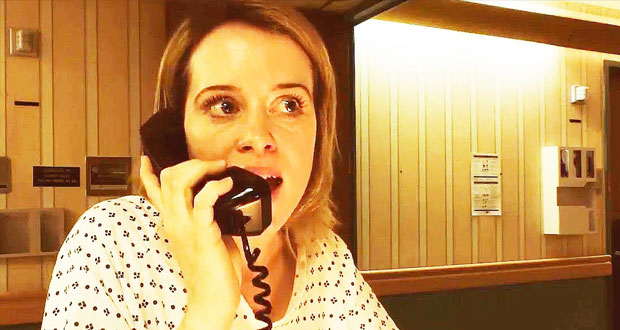 Despite purposefully constraining himself with such a low-tech piece of filming equipment, Soderbergh is still able to produce some eye-catching shots thanks to some clever framing and use of light.  I guess this is the film any lecturer could point to at an arts academy and say ‘there you go, anyone can make a movie with today’s technology.’

Of course, not everyone has access to Claire Foy, an actress who currently has her name in lights thanks to her high profile performance in The Crown.  Foy plays Sawyer, a young women who is committed to a mental institution against her will and goes from being certain of her sanity to questioning whether she is generally losing her mind.  Antagonising the situation is a staff member who appears to be a stalker from Sawyer’s past.  Or maybe he just resembles them?

The storyline in Unsane is pretty standard B-movie fare but I think it was wise of Soderbergh to not get too fancy with the tale so the focus sits squarely on how a talented actor can perform and hold your attention through the lens of a smart phone.  Of course Foy is more than up for the challenge.  She is compelling, convincing and thoroughly entertaining as Sawyer.  It’s crazy how such a famous and familiar face can still make you suspend disbelief, such is the energy and conviction she puts into her performance.  Credit where credits due, Joshua Leonard is also fantastic as the warden who either might be a crazed stalker or a poor guy muddled up in a case of mistaken identity.

Unsane is a fun, well-crafted thriller.  It’s a great showcase of the talents of all involved and one of the more entertaining low budget films of 2018.  Recommended.

A young woman is involuntarily committed to a mental institution, where she is confronted by her greatest fear–but is it real or a product of her delusion?

Summary : To shoot an entire film on a smart phone is an interesting gimmick. Soderbergh and Foy make it work and serve up an entertaining B-movie thriller.