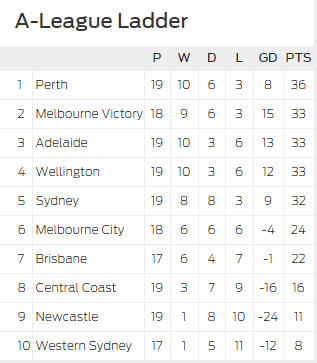 The Brisbane Roar Marathon Gets Warmed Up

The club’s resurgence under Frans Thijssen continued to slowly build with a 2-2 draw away to the league leaders.  On paper, you’d expect the Roar to be happy with that result but the reality was that Brisbane lead the game with ten minutes to go and couldn’t close it out.  Last season was defined by the number of times the Roar came from behind to win games.  This season has been the opposite – they’ve been in the lead in games against Adelaide, Central Coast and Perth (twice!) and failed to pick up the win.

Some general observations about the Roar from the weekend:

The Competition Finally Heats Up

To be honest, I’ve found the current season of the A-League to be a bit underwhelming at times.  The Roar have been lousy for large patches of the season and they’ve also had a pretty wonky fixture list.  Twice this season, the team has gone more than three weeks without a home game which is pretty deflating.  The competition as a whole has also been a bit of a drag.  I think Perth Glory could possibly be playing some of the least attractive football for a table topping team and for several weeks, it looked like they would be runaway leaders.  The Summer of Football also seemed to bring about some serious burn out in the clubs with December producing far too many scoreless draws and one-nil games.  The standard overall has been a step down from previous seasons.

The Asian Cup break seems to have paid off.  The clubs have returned with renewed vigour and now we have a fantastic set up for the last eight rounds of the competition.  Looking at the ladder, a whopping FIVE teams have a realistic chance at winning the competition.  This round produced four thrilling matches (the less said about Newcastle vs Central Coast the better) and the goals are flowing freely.  There’s a great race heating up for the golden boot too.  The A-League has come alive again!

Previous: The Fall – Season One
Next: Youtube Friday: The Ecology of Final Fantasy XV