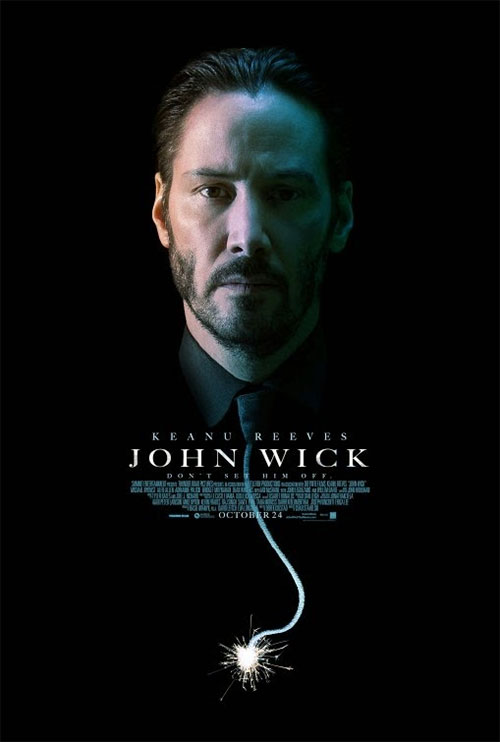 John Wick is a new action movie starring the apparently ageless Keanue Reeves who seems as fresh faced and limber as an action star today as he did fifteen years ago in The Matrix or indeed twenty years ago in Speed.

Reeves plays John Wick, the eponymous retired hitman who at the start of the film is mourning the passing of his wife from a terminal illness.

The death of Wick’s wife must have been a little while coming as she had the time to pen a farewell note and arrange a puppy to keep him company.  The start of the film is a low key affair as Wick works through his grieving process and potty trains this impossibly cute beagle.  This calm before the storm doesn’t last very long however.  Wick is accosted at a service station by the brash and arrogant Iosef, played by Alfie Allen (Theon Greyjoy in Game of Thrones).  Iosef takes a liking to Wick’s classic convertible and follows him back to his home, ambushing him that night and killing his puppy.  He is too lazy or indifferent to finish the job and kill Wick.

In one of the film’s few scenes where there isn’t a gun being fired, Iosef reports back to his mob boss father Viggo.  Viggo is infuriated with Iosef’s actions and explains to him that he has awoken a sleeping giant.  We learn that Wick was an unstoppable killing machine back in his day and only left the business of being a gun for hire when he met his wife.  Now that Iosef has killed the one remaining connection Wick had to his wife, Viggo explains that he will exact upon them a terrible vengeance.

The remaining ninety minutes is exactly that.  Wick arms himself to the teeth, gets a nice new car and then goes about the business of taking down Viggo’s mobsters one by one in a bloody, bullet-riddled ballet of carnage and destruction. 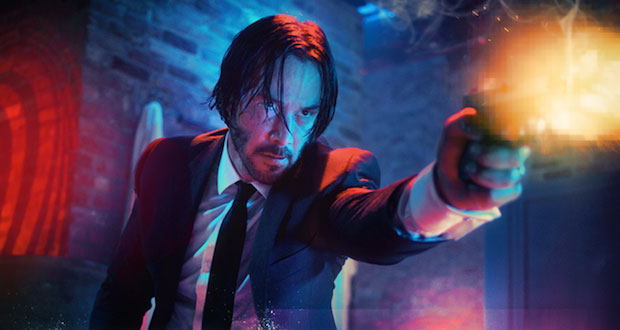 John Wick has been a very well received action movie by both critics and audiences alike and its easy to see why.  The film moves like gangbusters, stripping back any superfluous back story details or extraneous character development and gets to the business of being a down and dirty action movie in a matter of minutes.  As one might expect, Reeves is in his element playing a monosyllabic, vengeance-seeking bad ass.  Likewise, Alfie Allen is a fine choice to play the role of Iosef.  Allen has the demeanour and mannerisms of a cowardly heel down pat and its impossible not to root for Wick as he dispatches goon after goon in his hunt for Iosef.  Some villains play it cool and have a likeable anti-hero quality to them.  Not Iosef.  Iosef is weak, treacherous and creepy.  A runt of the litter who had the good fortune to be born the son of a mob boss.

The beauty of John Wick is its fast-paced and streamlined storyline which has a deliberate paucity of nuance or detail.  In fact, once the story of Wick hunting Iosef runs its course, the film does lose a bit of its charm.  The final act in the film involves a mentor character that hasn’t been particularly well developed as well as an exchange with the crime lord Viggo which also feels tacked on.  It’s not anything bad enough to spoil the good will of the preceding ninety minutes however.

I love action films in the vein of John Wick and I suspect so do a lot of other people when you look at the success in recent years of other low budget action thrillers (most notably Taken).  For me, the cheap and cheerful shoot ’em ups have a charm about them that I find lacking in expensive vanity projects like The Expendables and Pain and Gain.  The genre had fallen out of vogue for a few years and was slumming it in straight-to-DVD territory but now they seem to be back (“with a vengeance!”).

Gimme a good stoic lead, a reason to seek revenge and a gun that inexplicably fires a hundred rounds any day of the week and I’m a happy camper.

An ex-hitman comes out of retirement when gangsters invade his home and steal his car.

Summary : An entertaining no-frills action film that has guns galore.